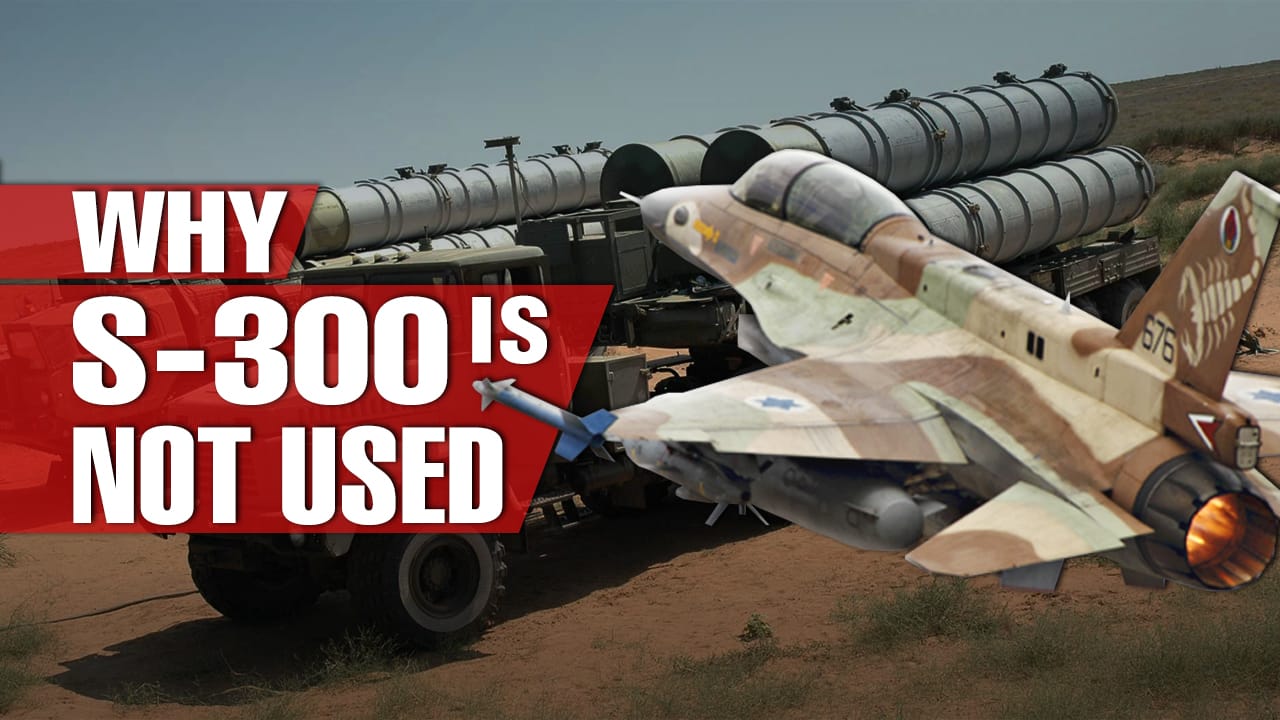 There has been considerable speculation in recent months concerning reasons why the S-300 air defense systems supplied to the Syrian Arab Army by the Russian Federation have yet to fire a shot in anger at Israeli aircraft encroaching on its airspace and launching ordnance against a variety of targets on Syria’s territory.

This video attempts to explore a reasonably complete range of explanations. On the one hand, the S-300 batteries in Syria operate under a handicap of operational and political restrictions. However, it would be a mistake to believe that just because missiles are not being launched, that the weapons in question are ineffective.

One crucial aspect of Israeli aerial operations is their use of civilian air traffic and also US-led coalition operations to shield their aircraft against Syrian air defenses. It is noteworthy that Russian cruise missile strikes, for example, are invariably preceded by international notifications and closures of relevant airspace in order to prevent tragedies.

Israel has not followed similar procedures and has frequently sent its combat aircraft into airspace used by civilian airliners over the Mediterranean and Lebanon. Considering the “international reaction” that would have inevitably followed in the event of a Syrian or Russian air defense shoot-down of a civilian airliner, it is rather likely that rules of engagement

used by the Russia-led coalition forces in Syria include strict prohibitions against engaging hostile aircraft when there is even a remote danger to civilian aircraft. The loss of Russian Il-20 with its entire crew to a Syrian air defense missile clearly shows the dangers of engaging remote targets in a crowded airspace.

Few examples illustrate the hypocrisy of Western powers’ supposed belief in the sanctity of national sovereignty better than its condoning of near-constant Israeli violations of Lebanese airspace. While that country’s territorial sovereignty is rarely challenged by Israel largely thanks to Hezbollah’s ability to inflict severe casualties on the IDF, neither Hezbollah nor the Lebanese military possess an air force or an air defense system capable of doing the same for the country’s airspace.

This allows Israeli aircraft to use Lebanon’s terrain features, specifically the mountain ranges flanking the Bekaa Valley, as a shield against long-range air defense systems. Israeli aircraft using stand-off munitions such as the SDB or Delilah are able to position themselves close to their targets by flying below the Syrian radar horizon, then popping up to launch their GPS-guided weapons before dropping down below the horizon to return to base.

In order to deny Israel that ability, Syria and Russia would have to extend their air defense network to the Bekaa Valley and/or patrol it using their own fighter aircraft, a measure that would likely provoke “international condemnation” and risk a massive escalation of the conflict. By the same token, the “international community” has imposed a de-facto embargo on the provision of modern weapons systems of any kind to the state of Lebanon, rendering it unable to defend itself against Israeli incursions.

Further complicating matters is the fact that the Russian foreign policy is attempting an extremely difficult task of maintaining reasonably good relations with both Israel and Iran in order to achieve its foreign policy objectives and bring the war in Syria to a successful conclusion. It really is a testimony to the skill and perseverance of Russian diplomats that it has managed to remain in good standing with both of these states.

No other major power can claim a similar success. But the downside of this kind of diplomacy is that it makes Russia, and therefore, by extension Syria (over whose national air defense system Russia exercises considerable control simply in order to safely operate its own aircraft) unwilling to engage Israeli aircraft except in the extreme cases of Israel attacking Russian bases or assets in the area.

Israel, for its part, has refrained from striking Russian and high-value Syrian targets which does suggest there exists something akin to an understanding between Russia and Israel that was reached in the wake of the aforementioned loss of the Il-20.

That loss led to a serious, though apparently temporary, deterioration of Russia-Israel relations. Fortunately Israel’s leaders value Russia’s good will, which is evidenced by Netanyahu’s nine meetings with Vladimir Putin in the space of 3 years and so far have been unwilling to risk even their brand-new F-35s against the S-300s. The combination of these political factors has limited Israel’s attacks against Syrian territory, which is also a contributing factor to the apparent idleness of the S-300 batteries.

As if these problems were not enough, it doesn’t help matters that Iran is pursuing a range of objectives of its own, which may not be consistent with Syrian and Russian interests. One visible example of the relatively low level of trilateral cooperation was the abrupt cancellation of the permission given to the Russian Aerospace Forces to use an airbase on Iranian territory to enhance the effectiveness of bombers operating from Russia against targets in Syria.

While Iran’s efforts to ensure its security vis-à-vis the United States, Saudi Arabia, and Israel are understandable, given the brutal nature of the power struggle in the region, in practical terms it means that Russia’s leadership does not feel an obligation to protect Iranian assets in Syria every time Israel attacks them.

There certainly is no evidence of any security agreement between Russia and Iran suggesting a commitment to mutual defense. The dependence on Iran-provided or Iran-supported manpower in the form of IRGC troops, Hezbollah, or Shia militias has moreover meant that Russia had relatively few levers of influence over Iranian policies in the region, since Iran’s ability and willingness to put “boots on the ground” in Syria made it an indispensable part of that loose alliance.

To the extent that there exists an understanding between Russia and Iran in matters regarding Syria, it seems to consist of Russia giving Iran a more or less free hand to do as it pleases, in return for Iran not expecting Russian air cover for its activities which in turn allows Russia to remain on good terms with Israel whose goodwill it definitely needs to end the war in Syria.

While the situation remains relatively stable with few escalation risks, it cannot be said it is a satisfactory state of affairs because considerable ambiguities remain and will remain for the foreseeable future.

Iranian forces in Syria will remain indispensable to that country’s security for as long as US forces remain in Syria and the status of Syria’s northern provinces controlled by insurgent groups supported by Turkey remains unresolved. Until these issues are addressed, the S-300 batteries in Syria will continue to play their part in maintaining this uneasy equilibrium.