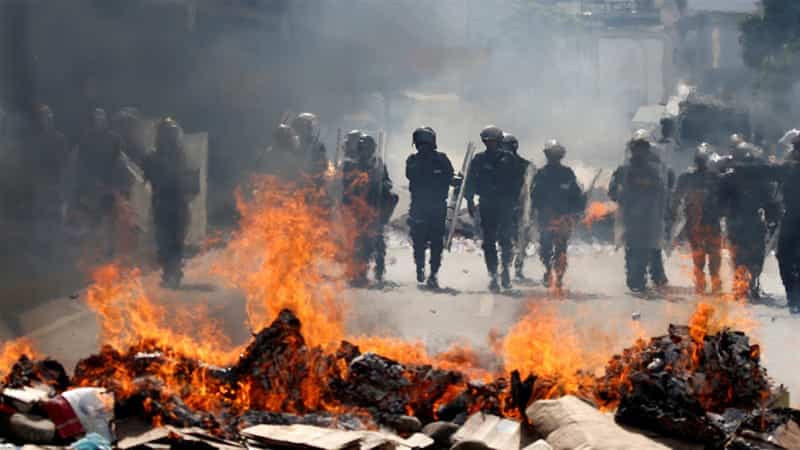 New World Order agents in the United States are using a new diabolical tactic in Venezuela: famine. How are they actualizing it? They slapped sanctions on the entire country. The New York Times itself has acknowledged that the sanctions are intended to target both President Nicolás Maduro and the oil company.[1]

The opposition group in Venezuela, which is funded and supported by NWO agents in the United States, have said that they want “to deliver tens of millions of dollars in food and medicine to ease devastating shortages and undermine the authoritarian rule of Nicolás Maduro.”[2]

Wait a minute. Do these people really think that we are stupid? If they were really sincere, why didn’t they target the root of the problem in the first place? Why didn’t they tell the United States and other covert agents to remove the sanctions, which would have solved the food crisis overnight?

What we are seeing here is that the opposition group is getting their orders from the United States, which is currently using famine for ideological purpose in Venezuela. The ideological strategy is pretty straightforward: starve a sizable number of the population, and then provide food and shelter for them so that they can blame the current crisis on Maduro. The New York Times has essentially and indirectly been advancing the same ideology. They declared:

“Hunger has gripped the nation for years. Now, it’s killing children. The Venezuelan government knows, but won’t admit it.”[3]

Yet in the same article, we are told that “Venezuela has the largest proved oil reserves in the world.”[4] Well, well, well. Aren’t we just repeating history here? Aren’t New World Order agents using the same tactic that they employed in Iran in 1953, when they overthrew a democratically elected president by the name of Mohammad Mossadegh?[5] Haven’t they been using the same diabolical ideology to destabilize any country that they don’t like?[6]

The interesting thing is that Reuters and other news outlets have recently perpetuated subtly that the famine is caused by Maduro. They did not even remotely suggest that US sanctions could be the cause of the famine![7] How stupid can it get?

ABC News, an organ of the Zionist establishment and war machine, did the same thing when inadvertently blame Maduro for the debacle. The news cited the Venezuelan opposition leader, Juan Guaido, urging members of the nation’s military to join the opposition. He declared: “How many of you national guardsmen have a sick mother? How many have kids in school without food.”[8]

Guaido is not that dumb. He knows the United States is responsible for the embargo, therefore he was simply using the crisis to advance the New World Order vision. Once again, he wants to win to hearts of the Venezuelan people by pretending to feed them. Once they are fed with US “humanitarian” aid, then they won’t even suspect that the US caused the crisis in the first place. Maduro seemed to have perceived the diabolical plan, and blocked the convoys.

Let us say this to my fellow Americans who trust the New World Order media: start thinking! Do not allow ethnic cleansers and destroyers determine your worldview. Use reason and history to blow the entire New World Order ideology out of proportion. For example, we know what the New World Order did in Iran in 1953, in Iraq in 2003, in Afghanistan, in Libya, in Syria, in Guatemala, etc. Has anything good emerged from these diabolical manifestations?

You be the judge.