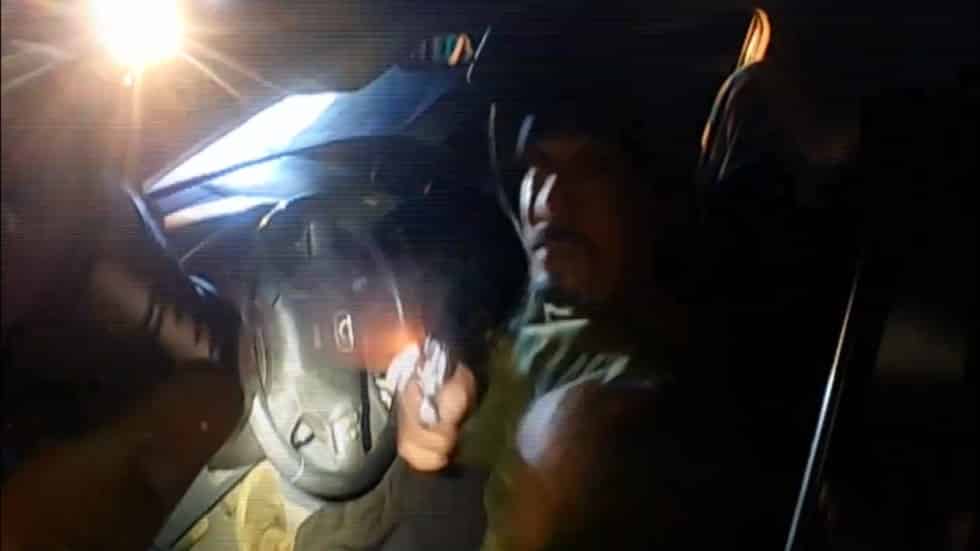 [ Editor’s Note: The female officer is alive due to her training, and using it. With all the stops cops do, the night ones are always the most dangerous.

People can be more drunk or drugged up and willing to do something they would not during the day. To avoid being the one going to the funeral home you have to be able to anticipate a felon’s move and already know what you are going to do. There is not time to think.

She ducked of course, as that is the standard move as the perp had his gun low and at a bad angle for him. If he had raised it up and leaned out the window he would have had a chance.

Cops practice the duck and dodge move she made to dart behind the car and pop up on the other side, and not too close as you will see, and empties a clip into him.

For him to shoot back he would have been twisting to his right, with his seat belt on, and trying to shoot through the right side window, I imagine for the first time, which with a 22 up against a Glock, does not tend to turn out so well. It was a good day for officer Jarecki, and she will be even more prepared the next time… Jim W. Dean ]

Police in northern California have released chilling footage of a short-lived, fatal shootout between a sheriff’s deputy and an armed suspect during what was ostensibly a routine traffic stop.
–

In a highly tense exchange, Jarecki asks if she can approach the driver’s side of the vehicle to have a look around before asking Hernandez Morales to roll down the window, which he does. “What’s up?” he asks her before opening fire.

He fires at least one shot but misses Jarecki who rounds the vehicle and fires multiple times through the front passenger side of the parked car, fatally shooting Morales, who died at the scene.

Morales had a warrant out for his arrest and had a loaded .22-caliber rifle in the car with him at the time of the shooting.

He was a farm worker who lived in Napa who had been booked into Napa County Jail at least five times for weapons violations, driving under the influence, and assaulting a police officer.