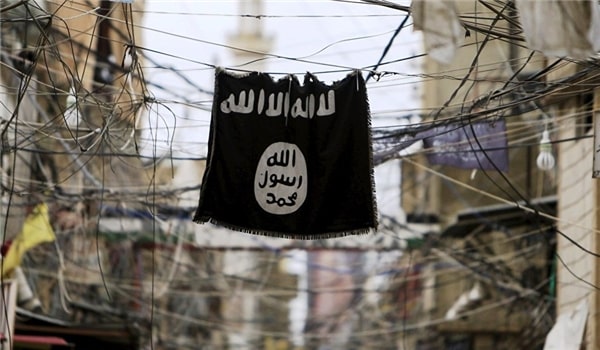 The US Army is taking ISIL’s gold treasure that is estimated to weigh around 50 tons from Eastern Syria to America, a source close to Kurdish forces said Sunday.
The Kurdish-language Bas News quoted a Kurdish source as saying that the Americans have transferred tens of tons of the gold ingots they have seized from the ISIL terrorists in Baghouz region in Southeastern Deir Ezzur to their own country and only kept a small portion of the treasure to be given to the Kurdish fighters.

The source who spoke on the condition of anonymity reiterated that about 50 tons of ISIL’s gold has been sent to the US from the US military base in Kobani in Northeastern Aleppo.

The report comes as the US has been using the airport in Southern Kobani for transferring consignments and military equipment in recent years.

In a relevant development last week, the US Army troops took out a sum of 40 tons of gold ingots belonging to the ISIL in heliborne operations after agreeing with the terrorist group and as Washington is preparing to announce the end of ISIL in Eastern Euphrates.

The sources pointed to boxes containing 40 tons of gold ingots that the ISIL had hidden in the Eastern part of al-Shadadi city, and said that the ISIL had stolen the treasure of gold from the Iraqi city of Mosul and different parts of Syria.

The US troops reportedly took out a group of ISIL terrorist commanders from Eastern Syria in two heliborne operations in Hajin region of Eastern Deir Ezzur and al-Dashisheh in Southern Hasaka and they were directed to the place where the gold treasure was hidden.

In a relevant development earlier this month, the London-based Syrian Observatory of Human Rights (SOHR) said the Washington-backed militants were trying to find and seize millions of dollars and at least 40 tons of gold left behind by the ISIL terrorist group,

The SOHR reported that the ISIL terrorists had stolen about 40 tons of gold and millions of dollars from the population once under their control in Iraq and Syria, which was later transferred to Eastern Euphrates in Eastern Deir Ezzur.

“The US-led coalition forces and the Syrian Democratic Forces (SDF) deliberately do not target the areas under the control of the ISIL terrorists and commanders in Eastern Euphrates in Deir Ezzur as they are trying to locate this treasure by forcing the ISIL militants to speak about its location after surrendering,” it quoted informed sources as saying.

They noted that part of the cash dollars and gold have been transferred from Turkey to the areas under the ISIL control by Turkish brokers and intelligence service who have close ties with the ISIL.

Meantime, an SDF Commander, Adnan Afrin, said that the ISIL is now under the siege of the SDF in an area no larger than one square kilometers in Eastern Euphrates.

In a relevant development on Tuesday, a prominent Syrian military expert revealed that Washington plans to transfer the remnants of the ISIL terrorists from Eastern Euphrates to other regions through Turkey and Iraq.

The Arabic-language website of Sputnik quoted Brigadier General Mohammad Issa as saying that less than 600 ISIL militants are stationed in a 4-km/sq region in Eastern Euphrates who will be soon evacuated from the region to foreign territories.

Issa questioned the US forces’ claims of fighting against the terrorist groups along with the Syrian Democratic Forces (SDF), stressing that the Syrian army will soon move to retake control over this region.

Media reports said last Sunday that the US army had agreed with the ISIL on the latter’s exit from areas under Washington’s control in Eastern Euphrates.

The US-led coalition troops and the SDF had reached an agreement with the ISIL terrorists on the militants’ retreat from areas under the control of the US and its allied forces, the Arabic-language al-Mayadeen TV news channel reported.

It pointed to the preparations by the ISIL to move its terrorists out of Eastern Euphrates, and said that the ISIL terrorists might be transferred to al-Anbar desert of Badiya al-Tanf in Western Iraq.

The report comes as the SDF claimed that it had started the final battle for uprooting the remaining elements of the ISIL from Eastern Euphrates.

Also the Arabic-language service of RT quoted media activists as saying on Saturday that the US-led coalition forces have carried out heliborne operations in the Eastern Badiyeh of Deir Ezzur.

It added that two US Apache helicopters have landed in Falitah region of Eastern Badiyeh of Deir Ezzur, taking away 7 big boxes whose contents were not known.