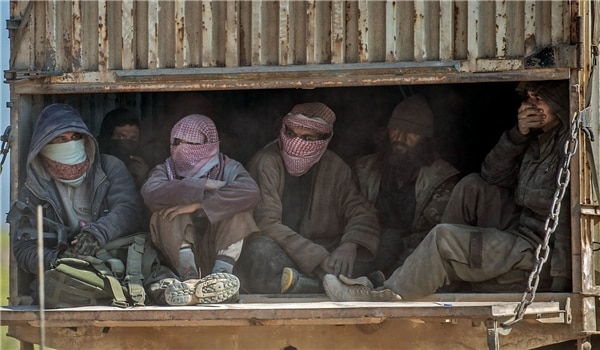 TEHRAN (FNA)- Tens of ISIL militants and their family members have left Eastern Syria for Turkey after paying thousands of dollars, while reports said that 3,000 others have been likely transferred by the US to Iraq.

The London-based Syrian Observatory of Human Rights (SOHR) reported on Monday that over 85 ISIL militants and their family members have been transferred to Turkey through regions occupied by the Syrian Democratic Forces (SDF) and Ankara-backed terrorists.

It added that each person had paid $10,000 to be allowed to leave the region, noting that one of the Uzbek members of the ISIL paid $50,000 for himself and his family members to escape.

Meantime, Hassan al-Olow, a member of the Iraqi parliament from Nineveh province, wrote on his twitter page that nearly 3,000 ISIL terrorists were evacuated from Baqouz region in Southeastern Deir Ezzur on over 30 trucks and under the US supervision.

He raised the possibility that the terrorists were transferred to the desert areas in al-Anbar province in Western Iraq.

Meantime, the SOHR reported that 82 ISIL militants along with their family members, with a total number of 1,400 people, were secretly evacuated from Baqouz on several trucks, adding that hundreds of them have been transferred to Iraqi territories.

The SOHR had also reported on Saturday that the US army troops had helped tens of thousands of ISIL terrorists and their families to get out of Eastern Euphrates.

It reported that about 35 trucks had arrived in farms of Eastern Euphrates to move out the remaining ISIL terrorists, commanders and their families from the region.

“Over 2,100 militants, including 70 ISIL terrorists who bear different nationalities, have left Eastern Euphrates in tens of trucks,” the SOHR added.

The source also pointed to the presence of about 3,000 to 3,500 commanders, terrorists and their family members in the region, and said they would be relocated soon.

“A sum of 45,900 ISIL militants from different nations have been moved out of the region,” it added.

The SOHR noted that the US forces and their allied militants would soon declare Eastern Euphrates a terrorist-free region.

US, Israeli, Saudi Footprints Found in Former Bases of Terrorists in Southern Syria

The Syrian army discovered a large number of US, Western, Israeli and Saudi weapons and equipment near Damascus and Quneitra.

The engineering units of the Syrian army found a cache of weapons, including US-made anti-tank missiles and a large number of West-made guns and heavy machine-guns as well as different types of ammunition, during purging operations in Southwestern Damascus and Quneitra.

They also discovered and seized several US and western communications systems, medical equipment and a large amount of Israeli, Jordanian and Saudi drugs.

In a relevant development last week, the Syrian army discovered a large amount of weapons and military equipment, including US and Israeli missiles, in mop-up operation near Damascus.

The Damascus Army’s engineering units continued their cleansing operations around Damascus and retrieved large amount of weapons, ammunition and military equipment, including hundreds of Grad missiles, US-made anti-tank missiles and 128-Caliber missiles made in Israel.