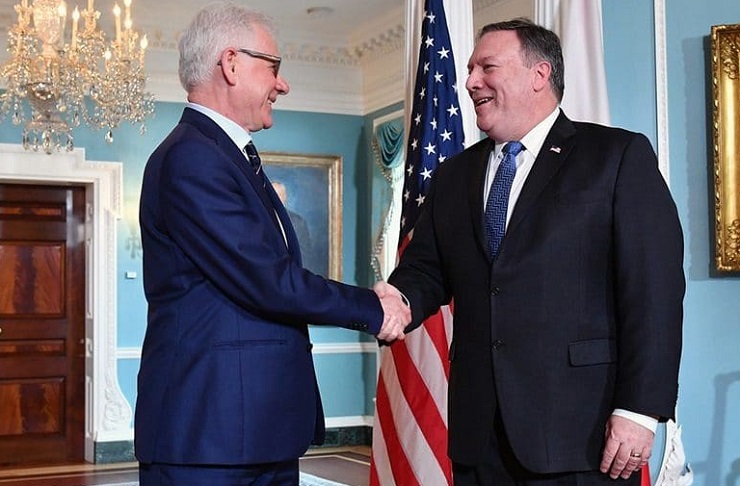 [ Editor’s Note: My duet on the Warsaw Conference got caught in the news blizzard mid-month and never got put up. So here they come, better late than never.

I wanted to do a front-end piece to go on the record with my impressions of the coming Warsaw show, and then compare it with the after-action one, where I waited a couple of days to study how the event would be spun by corporate media.

It was a big flop for the US and was forgotten quickly when the Munich conference eclipsed the non-event in Poland. But if Warsaw was one wooden stake through the vampire’s heart, Munich was the second, so my Warsaw retrospective had to include Munich, as Pence made history as the most humiliated American Vice President ever on an international tour.

Congrats Mr. Trump, for sending the B-Team out to take that whuppin’. If ever there was a throwaway vice president, it is Mr. Pence.

As for Bibi, I am not sure an indicted man can lead Israel into a suicidal war with Iran. But he should not worry, as there are more than a few Deep State jihadis willing to fill that spot. A war in the Gulf will be a quick economic nuclear bomb going off, which will quickly envelop the world. I do not look forward to it … Jim W. Dean ] 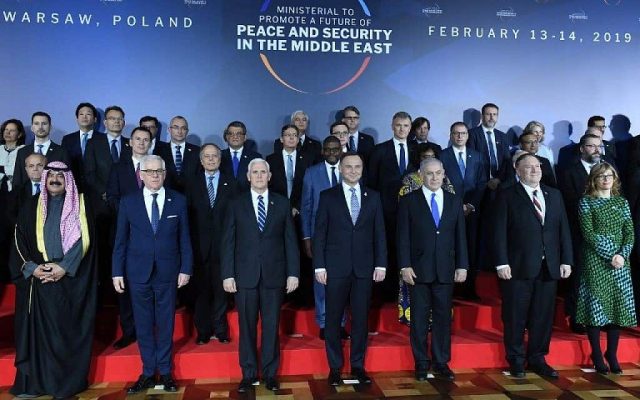 As we approach the start of the Warsaw conference it is time to read the teas on what to expect. I had to wait a day or two later than I wanted to write this because so much of the Foreign minister attendee list was still up in the air when that was needed to gauge the initial tone for the whole conference.

In short, the key players are going to be the angry losers of US coalition crowd to Balkanize Syria. Of the Arab countries we have all the Iran hater first line players, Saudi Arabia, the UAE, Bahrain and Kuwait. Qatar is sitting out after admitting it had had enough of the $160 billion spent to tear Syria apart.

Jordan of course will be there as it is virtually a US base, while Moroco and Oman will be along for the ride to see what presents might be available for signing onto manifesto and then do nothing after that.

The Yemen rump government backed by the Saudis will be there to blame all the Yemen deaths and suffering on the Houthis. Tunisia and Egypt are still pending with deputy ministers considerations.

The US and Poland are co-hosts, evidence of the ongoing seduction of Poland away from the EU into the US orbit while still having free trade with the EU. Poland wants a permanent US base and might get it just for hosting the conference. The US gets a “two fer” with Poland as it hates Russia, too. As for the EU we have Britain’s FM Jeremy Hunt coming, Germany’s FM Heiko Mass was a no, while France is still up in the air.

So there we have the big news. Trump’s flanking move on trying to undercut the EU Special Purpose Vehicle roll out by creating a new multinational Anti-Iran coalition with Poland as the tip of Trump’s spear, is basically going to be the old “let’s destroy Syria” gang focusing on new targets.

The EU has saved its honor by holding firm against the US push to impose a veto on its foreign policy and trade. It would have looked like a fool to have the Instrument in Support of Trade Exchanges (INSTEX) rollout followed by joining Trump’s new Iran fight club.

The big question now is can Europe stand up to the US pressure. It took the EU a long time to set up the Special Purpose Vehicle mechanism just for items not under sanction. While it has been formally registered, it has not begun operations. If the EU continues JCPOA efforts at the current snail’s pace the US will have time to set bear traps in front of I fear.

The real test for Iran is to have the EU begin buying its oil again as those revenues are what it will use to pay for European imports. That kind of balanced trade is supposed to be the ideal as both side profit and have a vested interest in keeping it going, which is why the US and Israel want to kill it.

The US and Poland attempted to spin the conference as really not being an anti-Iran hate fest, despite the first line Arab attendees being the top members of the club. Neither Iran or the Palestinian Authority were invited, a big hint as to who the crosshairs were going to be put on.

Secretary of State Pompeo had said early that the conference was going to deal with Iran’s “destabilizing influence in the Mideast. After pressure from Iran and some of the EU countries Poland changed the name to The Ministerial Conference to Promote a Future of Peace and Security in the Middle East.

Bibi Netanyahu tore that to shreds right away by saying the conference would start out dealing with Iran’s “destabilizing influence” in the region, going through a laundry list of entrenching itself in Syria, offering to do the same in Lebanon, its ballistic missile program, and then Bibi’s favorite topic, stopping Iran’s nuclear weapons programs.

Bibi is in a frantic mode to portray himself as the savior of Israel when the prosecutors are closing in on indicting him. Former Chief of Staff, General Benn Gantz, with a new political coalition, is polling neck and neck with him in the final run up to Israel’s election in March.

Russia has borne the brunt of this “destabilizing” taint tactic , having the US accuse it of violating the INF treaty, when NATO has been swallowing up one Eastern European country after another on its march to the Russian border. It watched the US put its powerful Aegis radar stations in Romania with kinetic energy interceptor missile launchers which Putin quickly pointed out could have their tubes changed out in a few hours to fire medium range cruise missiles with mini-nuke warheads.

It does not take a genius to see the geopolitical spin going on here. The US led proxy terrorism coalition is trying to cover up its defeat with a new Jidad on Iran. We are going to be fed a story that Iran is trying to “entrench” in Syria, when it had been invited in by Damascus initially to train its civilian defense forces to provide security in areas so the army could be released from static defense to go on the offense with increased mobility.

The strategy worked and the ISIS take over was stopped, but the Syria casualties mounted as it was fighting ISIS and the militants while the US was training and arming them both to keep up their offensive, the strategy being to win by grinding the Syrian military down to the point where the Army command would host a coup against Assad to save themselves. That did not happen.

In my three trips to Syria, I saw a people who viewed Assad and the army as one entity, and everyone understood that their standing shoulder to shoulder is what had saved them. When the Russians came in during the darkest hour, the first two months showed the Russian airforce quickly getting up to speed on the number of sorties it could fly and the effectiveness of its bombing.

By the third month everyone that wanted to, could see that the war had turned and it was just a matter of time before the Syrians won, and how many would have to die for that goal. Now the US coalition wants to punish those who fought its proxy terror war to stop, despite the Syrians having more KIAs than the US during WWII.

The US knows it took an effective coalition to defeat the one it had with the perfumed princes of the Gulf States who personally could not fight their way out of a paper bag. The Warsaw conference goal is to try to prevent such a coalition ever defeating it again by cranking up a new punishment war on Iran.

Iraq will have no part of it, nor will Qatar. Israel is just waiting of the slightest excuse to nuke Iran, with Bibi maybe thinking that a missile exchange with Iran might be the only thing that could save him from a prison cell.

By next weekend we will know where the war crowd wants to go next and what the world reaction will be. We will have a nuclear armed Israel telling the world to go to hell over criticizing it over anything, including its extensive WMD stockpiles. The US coalition felons will try to sell us their new Iran offensive being done to “stabilize” the Mideast when we all know they thrive on chaos and destruction.

They are in a George Orwell 1984 time loop where war is a good thing, good for the economy, eliminating competition, and gaining more serfs. None of us are safe from this kind of thinking. It is institutionalized terror wrapped in nice wrapping paper with a bloody ribbon.

The Deep State hoodlums want more war. They are not giving up after Syria, or Afghanistan. They are just getting ready to redeploy onto new targets. It is our job now to find out where, and get there ahead of them.