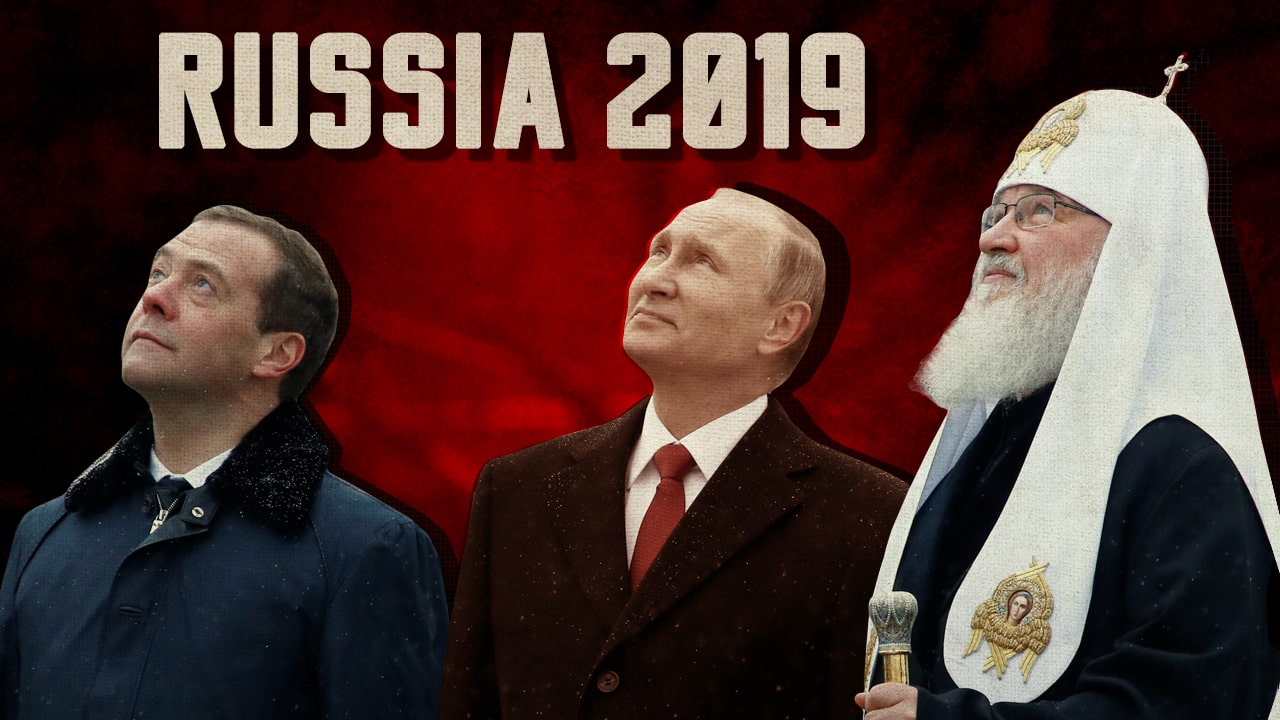 The Russia of 2019 is in a complicated economic and even political situation. Smoldering conflicts near its borders amid continued pressure from the US and NATO affect the situation in the country negatively. This is manifested in society and in national politics. The approval rating of the Russian government and personally of President Vladimir Putin has been decreasing.

According to VCIOM, a state pollster, in January 2019, Putin’s confidence rating was only 32.8%. This is 24% less than in January 2018 when it was 57.2%. At the same time, the confidence rating of Prime Minister Dmitry Medvedev was 7.8%. The approval rating of his cabinet is 37.7% while the disapproval rating is 38.7%. Opposition sources show data, which is far worse for the current Russian leadership.

This tendency is not linked to the foreign policy course of the Kremlin. Rather, it’s the result of the recent series of liberal-minded economic reforms, which look similar to the approaches exercised by the Russian government in the mid-1990s. The decision to increase Value Added Tax amid the slowing Russian economy, especially in the industrial sector, and a very unpopular pension reform increasing the retirement age were both factors contributing to the further growth of discontent in the population.

Russia’s GDP increased by 2.3% in 2018 compared to 1.6% in 2017. However, the Ministry of Economic Development, in its document entitled “Economic Picture” stated that this is linked to “one-time factors” and is not “stable”. The ministry maintained its earlier forecast stating that GDP growth in 2019 will be 1.3%. It confirmed increasing capital outflow. In this case, the repayment of funds to Western creditors by the Russian private sector is one of the causes.

The Ministry of Economic Development also pointed out that the expendable income of the population decreased by 0.2%. Statutory charges, including the increased taxes, are named as one of the reasons. The document says that statutory charges grew by 14.8% in 2018.

Additionally, the population is facing an increasingly restrictive administrative pressure: new fines and other penalties for minor violations in various fields and additional administrative restrictions limiting the freedom of actions of citizens. Restrictive traffic management of big cities, increasing fees for using federal highways as well as policies that are de-facto aimed at small business and self-employed persons are among its landmarks.

Meanwhile the general population has no effective levers of pressure to affect or correct government policy. The public political sphere has become a desert. United Russia (Edinaya Rossiya) is the only political party still de—facto existing in public politics. By now its ideological and organizational capabilities have become exhausted. Other “political parties and organizations” are just media constructs designed to defend the interests of a narrow group of their sponsors. It is hard to find a lawmaker in the State Duma or the Federation Council, who is not affiliated with the cliquish top political elite and oligarch clans.

In the media sphere, the government has failed to explain its current course to the population. A vast majority of the initiatives of Medvedev’s cabinet face a negative reaction from the population. A spate of scandals involving high and middle level government officials made the situation even worse. These cases revealed blatant hypocrisy and the neglectful attitude to duties of some Russian officials.

Some of the officials even became heroes of nationwide memes. Probably, the most prominent of these heroes are Minister of Labour and Employment of the Saratov region Natalia Sokolova and Head of Department for Youth Policy in the Sverdlov Region Olga Glatskikh.

Sokolova advised Russian pensioners to eat “makaroshki” [a derogatory term for maccheroni] to save money and to thus become able to survive on the subsistence minimum of 3,500 RUB [about 50 USD] per month.

“You will become younger, prettier and slimmer! Makaroshki cost is always the same!”, she said during a meeting of the regional parliamentary group on social policy in October 2018 adding that discounted products can be used to create a “balanced, but dietic” menu.

Glatskikh became a meme hero thank to her meeting with young volunteers during the same month. Commenting on the possible financing of youth projects, she told volunteers that the government did not ask their parents “to give birth” to them. So, they should expect nothing from the state.

In the period from 2018 to 2019, there were multiple arrests of officials caught exceeding the limits of their authority and being involved in corruption schemes. In comparison to previous periods, this number had increased by 1.5-2 times. The most recent detention took place right in the Parliament building on January 30. A 32-year-old senator, Rauf Arashukov, is suspected of being a member of a criminal group involved in the 2010 murders of two people and in pressuring a witness to one of the killings. On the same day, authorities detained his father, an adviser to the chief executive of a Gazprom subsidiary, Raul Arashukov. He is suspected of embezzling natural gas worth 30 billion rubles ($450 million).

However, these actions do not appear to be enough to change the established media situation. After a large-scale corruption scandal in the Ministry of Defense in 2012, which led to almost no consequences for key responsible persons including former Defense Minister Anatoly Serdyukov, who even continued his carrier in state-linked corporation Rostec. The general public has serious reservations about any real success of anti-corruption efforts.

The aforementioned factors fuel the negative perception of the Medvedev government and Vladimir Putin as the head of state among Russian citizens.

The 2014 events in Crimea showed to the Russian population that its state is ready to defend the interests of the nation and those who describe themselves as Russians even by force of arms. This was the first case when this approach was openly employed in the recent history of Russia. Therefore, the population was enthusiastic and national pride was on the rise. However, the Kremlin failed to exploit these gained opportunities and did not use them to strengthen the Russian state. In fact, up to February 2019, the policy towards eastern Ukraine has been inconsistent. At the same time, Moscow continues to lose its influence in post-Soviet states. This can be observed in both the Caucasus and Central Asia. Even, their close ally, Belarus, occasionally demonstrates unfriendly behavior and focuses its own efforts on the exploitation of economic preferences granted by Russia.

Evaluating the current internal political situation in Russia and its foreign policy course, it’s possible to say that the Russian leadership has lost its clear vision of national development and a firm and consistent policy, which are needed for any great power. Another explanation of this is that the Russian leadership is facing pressure from multiple agents of influence, which stand against vision of a powerful independent state seeking to act as one of the centers of power on the global stage. One more factor, often pointed out by experts, is the closed crony-caste system of elites. This system led to the creation of a leadership, which pursues its own narrow clannish interests. Apparently, all of these factors influence Russian foreign and domestic policies in one way or another.

The aforementioned large-scale anti-corruption campaign, regarding the people’s show-me attitude towards its result, could be a sign of a new emerging trend, which would lead to a purge of the corrupt elites and to strategic changes in Russian domestic policy.

It is highly likely that Russia will face hard times in the next two years (2019-2020) and face various threats and challenges to its economy, foreign policy course and even to its statehood.