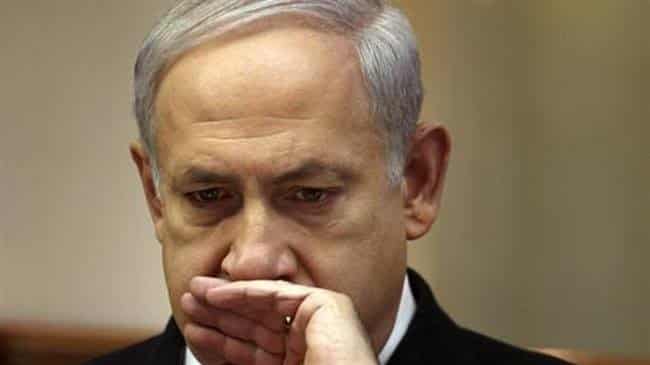 [ Editor’s Note: Bibi beat out Trump for getting indicted first, but I suspect Trump will beat Bibi in the number of charges category. As anticipated, Netanyahu says he will not step down. Sociopaths never admit their failings. It’s not in their DNA.

He got a bad ruling this week that he has to return the $300K that a cousin paid toward his defense, and Bibi’s billionaire buddy cannot pick up the tab either. Life is so unfair.

A long drawn out legal battle is anticipated; and who knows, as his obstinance continues, others might come forward about other past felony activity involving his grace, Bibi the Bombastic. But the big question is will his political party stand behind a dead man walking?

If he loses in the coming election, Israel might get someone worse, but without Bibi’s obvious failings, like General Benny Gantz. If he wins, we might be looking back on Bibi as a closet Quaker… Jim W. Dean ]

Avichai Mandelblit announced the decision in a statement on Thursday. The indictment would be handed over pending a hearing, in which Netanyahu will have a chance to refute the charges before they are formally laid.

In Case 1000, Netanyahu is suspected of receiving gifts from businessmen overseas. He is also being investigated in Case 2000 for a media bribery scheme to help Yediot Aharonot newspaper against its competitor Yisrael Hayom in return for favorable coverage. Case 3000 surrounds Israel’s $2-billion purchase of Dolphin-class nuclear-arms-capable submarines from German shipbuilding company ThyssenKrupp.

Netanyahu, who always denies engaging in any corrupt practices, has said he is convinced that the three cases against him will yield “nothing.” In January, he said he would not step down even if the attorney general sought to indict him for corruption.

Israel’s Prime Minister Benjamin Netanyahu says he will not step down even if the regime’s attorney general seeks to indict him for corruption.

The Israeli prime minister is not required to step down if indicted but he would have no option than to resign if he is convicted with all appeals exhausted. Netanyahu has been prime minister for a total of around 13 years.

Meanwhile, US President Donald Trump, who has portrayed himself as Netanyahu’s supporter by repeatedly recommending him as the regime’s next prime minister, has endorsed him again.

“I can say this, he’s done a great job as prime minister,” Trump said earlier on Thursday.

Mandelblit’s announcement, however, compromises Netanyahu’s chances of winning another term in April 9 early elections, in which he is facing a tough challenge from a centrist political alliance headed by Benny Gantz, a former military chief of staff.