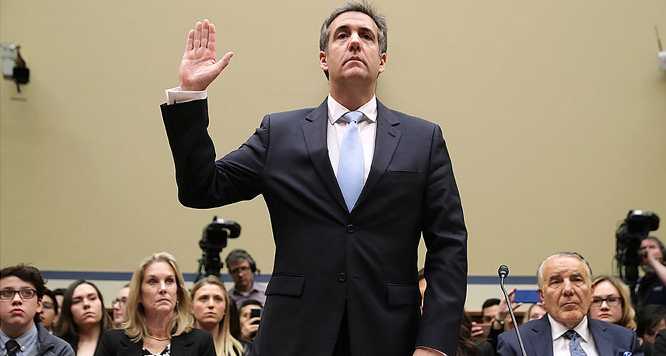 [ Editor’s Note: NEO got this up quickly. As a geopolitical journal, it does not do breaking news. The editors usually have articles lined up two days in advance, but sometimes some shuffling is done to post an important story before the news cycle moves on.

Publishing today helps it dovetail into Gordon’s barnburner the other night that I did the intro on. In it I covered the issue of how no matter how many charges Trump might get hit with, all those who were aware of his long criminal history, and many were, and did nothing might be in play if Trump gets angry and wants some company in his misery if he goes down. And as Gordon poses, Cohen might be the key to pointing them all out.

We could see a day in the future where Trump is sitting in Cohen’s chair. But it would take those in law enforcement and Intel to pony up to the table, when they have not done so in the past, to take down all those that got a piece of the action on the great Russian bank robbery.

At least we have two tickets to the show. If Mueller does not have the knockout punch, then the New York prosecutors might. If any of you missed Gordon’s missive, here it is, a must read for all those who have invested a lot of time to follow Mr. Trump … JD ]

After having his Congressional testimony appearance delayed due to threats against his family, Michael Cohen had his big day, coinciding with Trump’s big meeting with Kim in Hanoi.

The Republicans had their long knives out, and the Democrats were locked and loaded, praying for some new damaging information on Trump to win over wavering Republican votes on the bills to defeat his end run around the Constitution to get his emergency border wall built.

Cohen gave a carefully constructed presentation, full of remorse − or a wonderful acting job − but certainly dramatic. His new material included personal moments of working with Trump, a man about whom it would be hard to finding anyone shocked at anything Trump has done.

These personal stories were quickly pounced on by Trump disciples as more lies from a convicted felon wanting to reduce his sentence. Since Cohen has already been sentenced to three years, unless one of the sealed indictments waiting to be opened carries a new charge with it, there was apparently nothing to be gained by his lying.

Being smart enough not to rehash already known tales, he unveiled a series of Trump the schemer, conniver and draft dodger stories from his firsthand experience of discussing them with him. A few of the memorable zingers were Trump’s pettiness at organizing a straw purchaser to buy a Trump portrait at auction for $60,000 to get the news headlines, and then having Cohen call the Trump foundation to order them to pay for it.

Paying hush money to the Playboy model for that affair was old news, but Cohen brought a copy of a check from Trump to reimburse him, paper evidence of a felony and possibly more than one when a conspiracy charge gets added to the event.

We all knew that Cohen had a treasure trove of Trump business records, which the Mueller investigation has been mum about. Cohen gave us a peek into the closet today, starting with financial statements, allegedly fraudulent ones to get financing from Deutsche Bank, a major felony there from an institution that has paid huge US fines for money laundering.

Regarding the validation about the Trump Tower in Moscow, the fact that work on the deal continued during the election campaign came as no surprise, but Cohen gave it some new framing.

He told Congress that Trump never expected to win, not even the primary, as he had been running mainly to build up the value of his brand, something that VeteransToday always posed during the campaign. Cohen testified that Trump said that the whole exercise was going to be the “greatest infomercial in political history.”

So Trump wanted to keep the big Moscow deal going, as he wanted the couple hundred million he was looking to make on it to chip in on refunding the $66 million that Politico claims he put into his campaign.

The big win PR wise for the Republicans was Cohen admitting that he had no knowledge of Trump being coopted by the Russians via election interference. His stated position that Trump never expected to win would make that theory dead on arrival.

But while the Cohen testimony is one more page in the long running Trump scandal reality tv show, the one that does not have the script that he planned, there are many more pages waiting to be turned with the Mueller report hovering in the wings.

There has been little coverage about a sleeper item that could blow the whole story wind open, and that is the sealed indictments that are already sitting at the courthouse. There were a few oblique mentions about them in 2018, but this week we got an actual count, and a big surprise. There were 57 filed last year at the DC Federal Court, and 17 already this year, a total of 74.

It is not expected that these are all related to RussiaGate, but could involve a number of other unlawful acts that the Mueller investigation uncovered. And many suspect, including me, that a lot of these sealed indictments could be for untruthful testimony given in Congressional hearings, which are felonies. Testifying before Congress is no joke, nor is signing an affidavit that is “inaccurate”.

Die-hard Trump supporters wrote off Cohen personal private stories about Trump as a “he said, she said” tempest in a tea cup that will amount to nothing. But they are overlooking one thing. Mueller is not about to bring any charge or file an indictment based on the word of one person’s testimony. The stakes are too high to bring a thin case into a courtroom.

He will have one and often two corroborating sources of evidence to substantiate verbal witnesses like Cohen today. Those sources could include wiretaps and email traffic, or witnesses who have agreed to testify against others.

My personal feeling was that Trump made a mistake when he grandstanded over how he was going to bring down the FBI and cleanse it from the bottom up. He literally declared war on the whole institution, not something that would have entered my mind for a second, if I were in his shoes.

If Mueller has taken that threat to heart, he might have taken his time with this long and complex investigation to put on display for the country and the world what the consequences of threatening the FBI and the US justice system can be.

But Mueller’s sealed indictments are not the only shoe waiting to be dropped. The New York Attorney General, Letitia James has ramped up investigations into Trump’s past business dealings in New York, and any NY loose ends that Mueller has when he closes his investigation could be passed along to her. Paul Manafort is one who might face New York charges, if Trump pardoned him on the Federal charges.

James has been looking into tax and financial improprieties by the Trump Organization and the Trump Foundation, where a suit by the former New York AG claims “persistent illegal conduct”, which I remember a time when that was called something more plainly, “running a continuing illegal enterprise”, which gave birth to what was called the Rico Act, where those defrauded got triple damages.

There has been a lot of talk about how the new Attorney General Barr may only release certain portions of the Mueller report publicly. But with the Democrats running the House now, I think Mueller would be called to testify before them, where he would be provided ample time to reveal what he wanted to during his questioning.

I doubt that Trump is going to be able to put the cork in the bottle over his numerous legal problems. I find it quite an irony that he and Netanyahu, analogous to a modern Butch and Sundance movie remake, might find their careers heading south in one last political shoot out.

The White House internal plan initiated in the National Security Council to hand Saudi Arabia a nuclear reprocessing capability for weapons on a silver platter, an insider deal where Jared Kushner seems to have played a key role with the Crown Prince, could begin a new round of criminal investigations for influencing-pedaling on steroids.

I think we are going to have a busy year, with both political and geopolitical major controversies, as wars seem to be percolating in a half dozen areas now, just as Syria is winding down. Who could possibly be in a position to benefit from that?