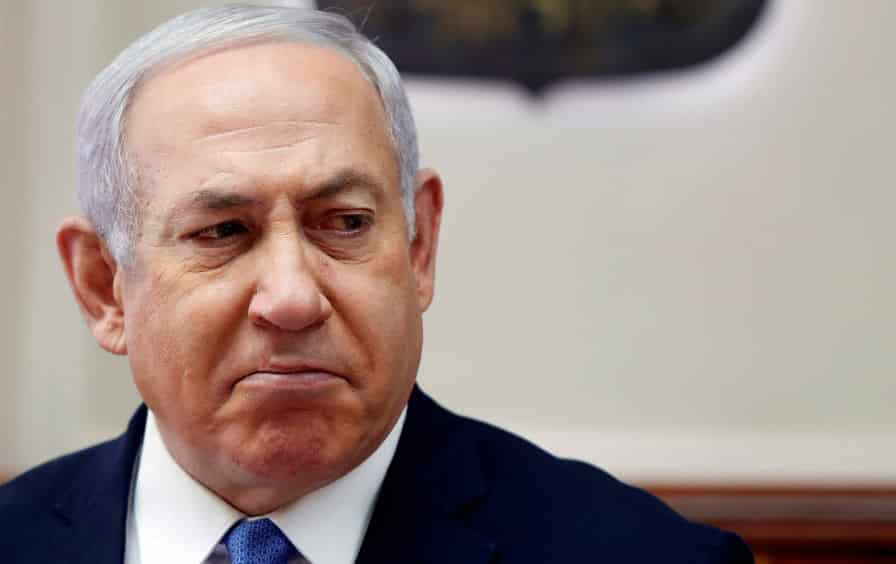 Israel’s attorney general, Avichai Mandelblit, announced on Thursday that he will charge Prime Minister Benjamin Netanyahu with bribery, fraud, and breach of trust in three separate criminal cases, pending a hearing. If the indictment proceeds, this will be the first time in Israeli history that a sitting prime minister has been charged with a crime while in office.

The attorney general’s decision, which essentially corroborates police recommendations, is based on the work of a large legal team that has been investigating the allegations for two years.

Technically, Netanyahu’s status has not actually changed, and there is nothing that legally prevents him from running for office in the April 9 elections and being returned to the Knesset. The indictment itself will not be filed until after the vote, and Netanyahu has the right to a hearing before he is indicted—a process that allows the accused to challenge or refute the evidence before state prosecutors. That could last months, perhaps even a year, and while it is not likely, there is even the possibility that Netanyahu will not ultimately be indicted.

In the 57-page letter detailing the charges submitted by Mandelblit to Netanyahu, the AG summarized, “You put yourself in a conflict of interests between your public duties and private affairs, abused your authority as a public official and committed acts of breach of trust that hurt the image of public service and public faith in it.”

Netanyahu, who is serving his third consecutive term as prime minister since 2009 (his first tenure as prime minister was from 1996 to 1999), denies all the allegations. He said in in a statement Thursday night that he is the victim of a “witch hunt” and that “the house of cards will soon collapse.”

In “Case 4000,” considered the most severe, the charges are bribery, breach of trust, and fraud. Netanyahu is accused of advancing regulatory decisions that benefited Shaul Elovitch, the controlling shareholder of Israeli telecommunications giant Bezeq, in exchange for positive coverage from the popular Israeli news site Walla!, which Bezeq owns. (This was in the period between 2014 and 2017, when Netanyahu was serving as communications minister in addition to being prime minister; he still holds several ministries concurrently.) According to Mandelblit’s draft indictment, “Based on actions and circumstantial evidence, the attorney general has reached a clear conclusion, by which corrupt, improper motives were at the core of Netanyahu’s actions.” Netanyahu claims that a couple of articles of positive coverage doesn’t amount to bribery.

In “Case 1000,” Netanyahu is suspected of receiving gifts (thousands of dollars’ worth of cigars and champagne) from affluent patrons, prominent among them Israeli Hollywood mogul Arnon Milchan, in exchange for political favors that benefited the latter’s business interests, such as helping Milchan obtain a US visa and promoting tax breaks for him in Israel. Netanyahu does not deny receiving the gifts but claims they were not in exchange for anything.

In “Case 2000,” Netanyahu is suspected of fraud and breach of trust for reaching an agreement with Arnon Mozes, publisher of the Israeli daily Yediot Ahronot, to reduce circulation of its primary rival paper, Sheldon Adelson–owned and pro-Netanyahu freebie Israel Hayom, in exchange for more favorable coverage of Netanyahu in Yediot. Netanyahu was caught on tape telling Mozes as much. According to reports, several prosecutors working with Mandelblit pushed for a charge of bribery in addition to fraud and breach of trust, while Mandelblit wasn’t sure of the strength of the case. Netanyahu claims in his defense that there was never any intention to actually follow through.

Responding to the charges Thursday night, Netanyahu doubled down on his incitement against the left, specifically calling out legal clerks working on the case as well as the media. “The left knows that with such feats, they can’t beat us in the ballot. That’s why for three years they have been carrying out political persecution against us in order to topple the right-wing government.” Reiterating his campaign message, Netanyahu said that the choice is between “a weak left-wing government headed by [Yair] Lapid and [Benny] Gantz and supported by the Arab parties, or a strong right-wing government led by me and the Likud.”

Benny Gantz—a former IDF chief of staff and Netanyahu’s sole political opponent in this election—is running with Lapid on the joint Blue and White list. Gantz called on Netanyahu to resign, promising the Israeli public that he would not sit in a governing coalition with Netanyahu. Netanyahu, who has no plans to resign, said he intends on serving as Israel’s prime minister for many more years to come.

There are two prime ministers in Israel’s history who have resigned as a result of criminal investigations—and both did so before the stage Netanyahu has reached in the current legal process. In 2008, then–Prime Minister Ehud Olmert resigned after police recommended charges in a corruption probe. Ironically, it was that resignation that led Tzipi Livni to assume the helm of the Kadima Party, which then won the 2009 elections; her failure to build a coalition paved the way for Netanyahu to become prime minister. In 1977, Prime Minister Yitzhak Rabin resigned after an investigation revealed an illegal bank account jointly held by him and his wife, Leah, in Washington. He immediately took full responsibility.

In recent months, polls have shown that despite the charges against Netanyahu, his Likud Party would still be reelected. But since Gantz and Lapid joined forces last week, they have been surging. A poll conducted by The Times of Israel between February 24 and 27 indicated the Likud would drop four Knesset seats, from 29 to 25, while Gantz-Lapid spiked from 36 to 44 seats. And 28 percent of those who planned to vote for Likud said they would not do so if the attorney general announced a decision to indict.

However, another recent survey, by Haifa University of right-wing and religious voters, found that 75 percent of ultra-Orthodox voters and 65 percent of Likud voters believe that law-enforcement institutions are trying to remove Netanyahu. The media are even less trusted. Seventy-seven percent of Likud voters believe the media are unfair. That percentage reaches nearly 100 percent when it comes to religious voters on the right.

It is hard to predict whether this development—anticipated for months—will spell the end of Netanyahu’s decade-long term. However, news of the charges nearly submerged another development Thursday, also implicating Netanyahu, but on far more serious offenses: A United Nations report found that the majority of 189 Palestinians killed by Israeli forces during the Gaza Great March of Return last year did not pose any immediate threats, and “found reasonable grounds to believe that Israeli snipers shot at journalists, health workers, children and persons with disabilities, knowing they were clearly recognizable as such.” On the offense of directing soldiers to commit violations of international human rights, Netanyahu, who also serves as defense minister, is not being charged—and it is not playing a role in what decides the upcoming election.