Home WarZone Russia: US wants bloodshed in Venezuela, but we ain’t gonna let that... 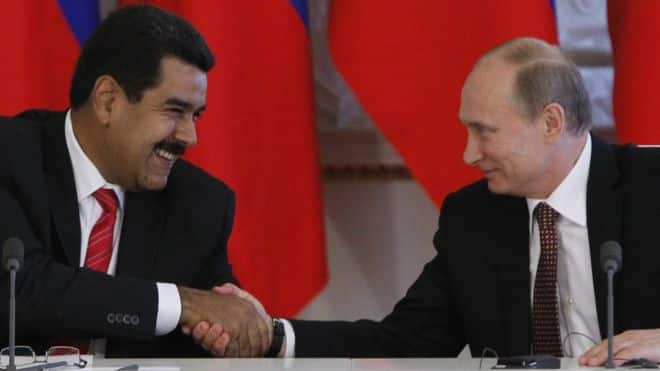 Russia has essentially sent the United States a political ultimatum, one which obviously should put New World Order agents in Washington in a state of confusion. NWO agents out to be freaking out because much of the world is watching how they are acting like psychopaths or gangsters or thieves. Parliament Speaker Valentina Matvienko told the vice president of Venezuela:

“We are very concerned that the U.S. are ready for any kind of provocation to start bloodshed and justify military intervention in Venezuela. We’ll do everything possible to avoid this. We are confident that the Venezuelan crisis, artificially created by the U.S., can be resolved only peacefully, via dialog of all local political forces.”[1]

Matvienko has raised a crucial issue here: dialogue. New World Order agents are scared of it precisely because dialogue is based on rational discourse and mutual understanding. And rational discourse is impossible without practical reason.

As we have argued in the past, the main goal and purpose of the New World Order is to subvert the moral and political order and replace it with something dark and evil, thereby creating a world in which logic and reason become obsolete. The New World Order seeks to enslave the entire globe with a diabolical ideology, utilizing internal subversion, wartime economic sanctions, and a global surveillance police state. We continue to witness this in our time.

Moreover, New World Order agents continue to destroy one country after another with no moral principle whatsoever. What is so astonishing to much of the world is that New World Order agents see nothing wrong in obliterating men, women and children. They have absolutely no remorse. Listen to what political whore Ann Coulter had to say a few years ago:

“Sorry we have to use your country, Iraqis, but you let Saddam come to power, and we are going to instill democracy in your country.”[2]

No one with an ounce of common sense can say that Iraq is now a democracy. Even ethnic cleansers like Jonah Goldberg would agree, conceding indirectly and at the same time risibly that “Iraq was a worthy mistake.”[3] But in the New World Order universe, to “instill democracy” men, women and children have to die. Mothers have to mourn for their babies, and fathers have to dislocate. This “democracy” is basically hell on earth. And this is why New World Order agents continue to live in a dream world where practical reason plays no role.

As it turns out, the New World Order which Satanists and their lackeys have established over the years is not based on the pursuit of truth or moral principles but on the pursuit of categorical lies, colossal hoaxes, deceptive means, and complete fabrications. This is the world that Russia seems to be challenging. One can say that the Russians did a fairly decent job in stopping New World Order agents in Syria, and it seems that they are ready to stop another diabolical activity in Venezuela. May God bless them.