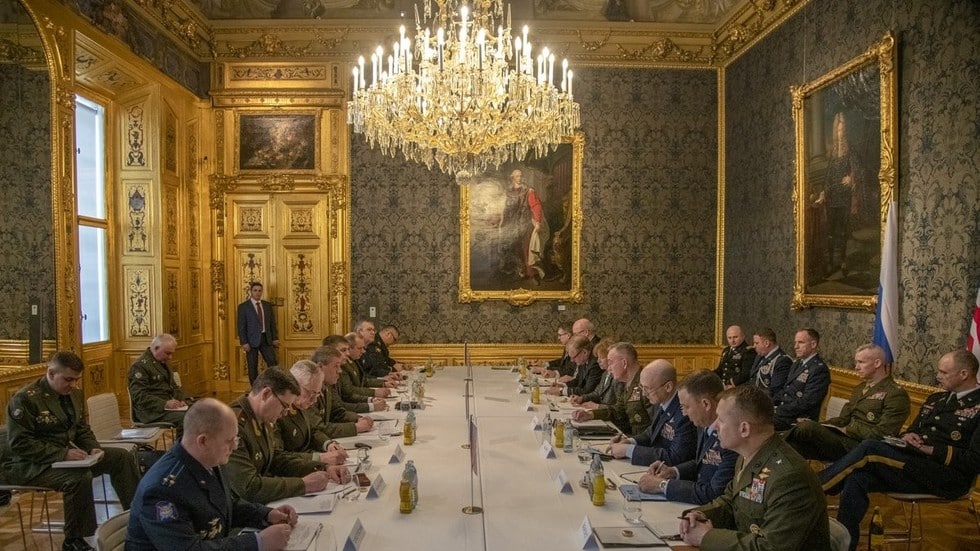 [ Editor’s Note: This is a bit of a non-story story. On the one hand they do not claim to have made any progress on anything, but discussed things. This may not seem like much but is is far better than no communication going on at all.

Sometimes little hints are passed from one side to other in these meetings, between old war horses who know “that this too will pass”, meaning political relations go up and down depending on what gangs are in control of what countries.

The most meaningful line below was Putin’s mention that even though the Russia was leaving the INF now in response to the US doing so, he would be open to reversing that decision.

That alone, makes it newsworthy. Sometimes all we have is hope that things might improve, and we try to make it last until better days return… Jim W. Dean ]

Russia’s military top brass have met with their US counterparts, discussing issues of regional and strategic stability. The meeting came just as Moscow followed the US and suspended the landmark intermediate-range missile treaty.

Chairman of the US Joint Chiefs of Staff Joseph Dunford met with his Russian counterpart, Valery Gerasimov, in Vienna, Austria on Monday.

“The two military leaders discussed the deconfliction of Coalition and Russian operations in Syria, and exchanged views on the state of US-Russia military relations and the current international security situation in Europe and other key topics,” the US Joint Chiefs of Staff said.

Gerasimov and Dunford have agreed to maintain “regular communication” in order to prevent “miscalculations” between the militaries of the two nations.

A statement from the Russian military was equally vague and lacked any actual details of the meeting. The two officials have discussed regional and strategic stability, as well as two disarmament agreements: the Strategic Arms Reduction Treaty (START) and Intermediate-Range Nuclear Forces Treaty (INF), it said. All in all, the Russian Defense Ministry described the talks as “constructive.”

The meeting came just as Russian President Vladimir Putin suspended the country’s participation in the INF treaty. The agreement might be reinvigorated if the US “eliminates its earlier violations of its obligations,” the presidential decree, published Monday, reads.

The move came in response to a similar move by the US in early February. The two countries have repeatedly accused each other of violating the landmark deal, signed back in 1987, while maintaining their own compliance with it.