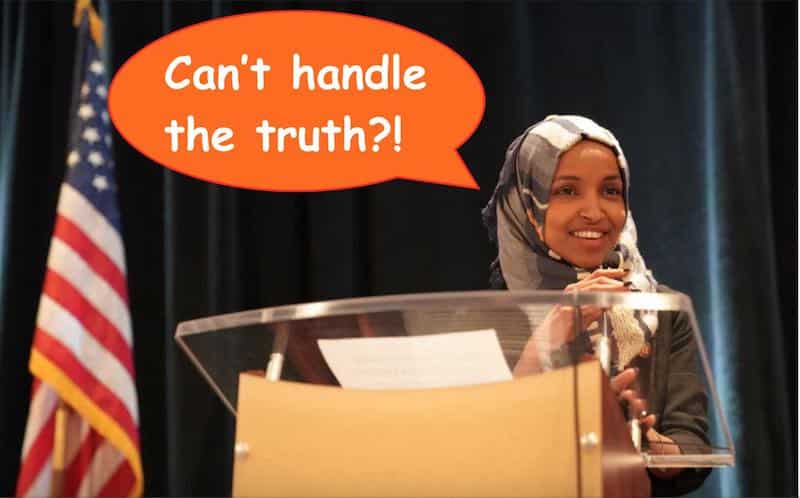 Some people just can’t handle the truth. Case in point: America’s Jewish Establishment and the Shabbat goys on their payroll, who are all squealing like stuck pigs in response to Rep. Ilhan Omar’s pointed remarks about Jewish-Zionist power.

I wrote about Rep. Omar’s first (February 10) Twitter outrage in the new issue of Crescent Magazine:

Ilhan Omar’s ‘all about the Benjamins’ tweet, and the media feeding frenzy that followed, unleashed an unprecedented exposé of Jewish-Zionist money power in America. (“Benjamins” refers to $100 bills; Omar borrowed the line from a hip-hop song by Puff Daddy — which raises questions about her musical and cultural tastes). In the past, the entire America Left, led by people like Noam Chomsky, has denied the power of the Israel Lobby. Anyone who pointed out that Israel runs America’s Mideast policy through its Fifth Column, using its monstrous money power, was denounced with the obligatory nonsensical slur “anti-Semite.” Even Walt and Mearsheimer’s understated The Israel Lobby and US Foreign Policy (2007) was vilified and marginalized.

But in the wake of Ilhan Omar’s tweet, many voices that would normally denounce “anti-Semitism” have instead admitted that Omar is right: AIPAC’s power really is “all about the Benjamins.” The Nation, America’s leading Establishment Left magazine, published Israeli Jew Ady Barkan’s confession “What Ilhan Omar Said About AIPAC Was Right.” The Jewish Daily Forward responded with Peter Feld’s “No, Ilhan Omar Is Not Anti-Semitic For Calling Out AIPAC.” Feld put it bluntly, “There are plenty of Jews, like me, whose beliefs are voiced by Omar, not AIPAC.” Mehdi Hasan of The Intercept summed it all up, “There Is a Taboo Against Criticizing AIPAC and Ilhan Omar Just Destroyed It.”

On the other side of the political divide, Donald Trump called on Omar to resign. Good luck with that one, Donnie! Most Republicans, and quite a few Democrats, ritually waxed indignant in an effort to please their Zionist paymasters — ironically proving that Omar’s tweet was accurate. Rarely has the saying “if you’re catching flak, you’re over the target” been better illustrated.

Read the full article at Unz.com