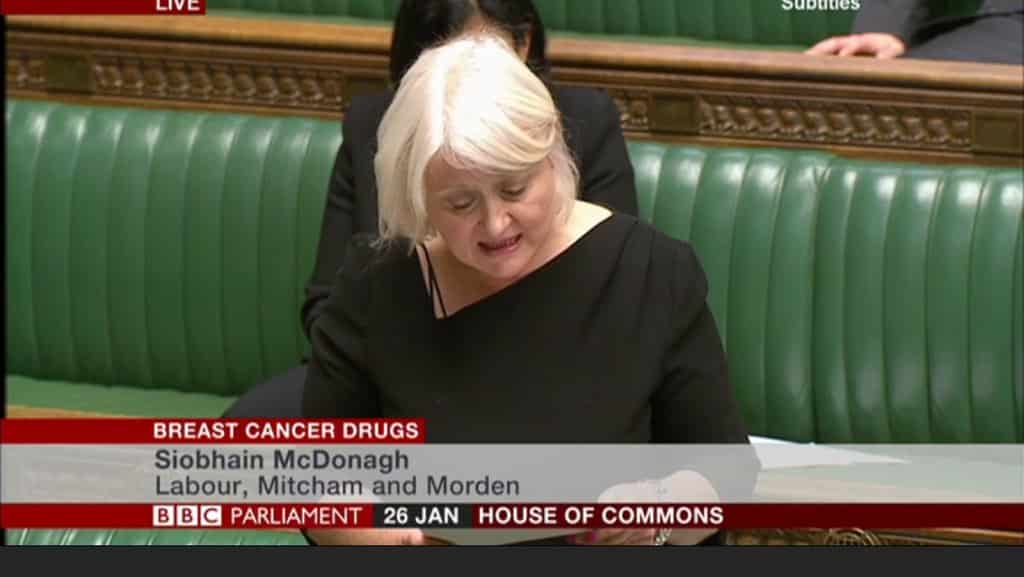 As Jim W. Dean would put it, “you can’t make this stuff up”. Siobhain Ann McDonagh is a British Labour Party politician and has been the Member of Parliament for years. She was a strong supporter of the Iraq debacle in 2003 and has incessantly voted against any investigation on the debacle itself.

In 2015, McDonagh also was a supporter of sending UK troops to Syria. It stands to reason to say that McDonagh has been a New World Order agent since the beginning of her political career. But that’s not all.

McDonagh has recently come out and equated anti-capitalism with anti-Semitism!  When asked the question, “In other words, to be anti-capitalist you have to be anti-semitic?” McDonagh couldn’t string a coherent sentence. She declared:

“Yes. Not everybody but absolutely, there’s a certain strand of it and these people are not labour, have never been labour but we now find them in our party”

Now we have a serious problem here because there is no way for McDonagh’s statement to be true in any sane universe at all. Moreover, someone needs to give McDonagh a copy of Naomi Klein’s The Shock Doctrine: The Rise of Disaster Capitalism. Klein is Jewish and her assessment in the book can be thoroughly be investigated by the scholarly material available to us. So is Klein anti-Semitic? Or could it be that McDonagh is supporting certain groups or companies that pay her bills?

As it turns out, McDonagh’s statement is a cheap way of supporting the oligarchic system which continues to wrap around the entire planet with tentacles such as usury. Usury, as G. K. Chesterton put it, “is in its nature at war with life,”[1] and anyone who supports this enterprise is also supporting the death of economic life. Usury leads to compound interest, and nothing grows fast enough in the economy to keep up with compound interest (something proven by history and the economic collapse which happened in 2008 in America, in Greece and elsewhere).

The topic of usury is as old as civilization itself. Usury was routinely practiced in ancient civilizations such as Babylonia, and historian C.A. Herrick argued that “debt and excessive interest rate were burdensome” back then.[2]

In the process of time, “Overlords arose displaying great wealth that was produced by the sweat of others. Also, these overlords became masters of many slaves by means of foreclosure.”[3] Let’s just say that whenever usury is followed in a society, sophisticated ways of cheating become the norm, and the rich and the powerful cheat the oppressed, the poor, and the needy.[4]

In the Roman Empire, after the death of Augustus, the rich started employing usury to increase their wealth.[5] In the process, they largely “controlled any financial movements in the economy.”[6] Eventually, during the decline of the Roman Empire, “the tenant-farmers were reduced to serfdom by their creditors.”[7]

Usury was eventually condemned by all religious institutions, including Islam, Hinduism, and Buddhism, because it was viewed as a practice that oppressed the poor and needy and had the potential to bring about the collapse of economic progress. In Islam, for example, trade or fee is permitted, but usury is not.

Philosophers such as Plato, Aristotle, Cicero, Seneca, and Plutarch also condemned usury as unnatural (contra natura) and immoral. This discussion became so important in Plato’s Law that he ultimately not only advises that “no money should be lent at interest” but that “the borrower should be under no obligation to repay either capital or interest.”[8]

Usury was indeed a huge problem in ancient Greece at the time—Plato says in The Republic that the oligarchs gather their wealth through usury and by ruining the life of others, namely the poor.[9] Aristotle called usury “the most hated” form of “getting wealth.”[10] Marcus Porcius Cato, a Roman statesman who lived between 234 and 149 B.C., indirectly equates usury with murder.

If you don’t think that Cato is right, all we have to do is observe how compound interest is taking a huge toll on almost all the strata of the U.S. economy, especially among college students and home owners.[11]

In early 2012, student loan debt reached $1 trillion,[12] with the average graduate owing at least $25,000.[13] During the same season, student debt rose by 8% and college tuition skyrocketed.[14] Fifty-one-year-old Doug Wallace, who graduated from Eastern Kentucky University with a debt of $89,000, declared, “It’s like you’re not of much worth in society.”[15] Courts have found that “debt collectors misled borrowers” with regard to student loans.[16]

Kelsey Griffith, a student from Ohio, graduated with a debt of $120,000. Chelsea Grove, a Bowling Green State University drop-out, is now paying off a $70,000 debt, even though she has no intention of going back to school. Christina Hagan will have to pay off a $65,000 debt when she graduates from Malone University (an evangelical school).

Although she makes $60,000 a year as a state representative, “she plans to begin waiting tables in the next few weeks…to help pay down her student loans and credit cards.”[17] Hagan has a message for the younger generation, “I need my generation to understand that nothing is free.”[18]

So when McDonagh equates capitalism with anti-Semitism, then she was essentially trying to shut down the plight of people like Hagan. But no one with an ounce of common sense should take her seriously precisely because the formula she was hopelessly trying to articulate doesn’t line up with logic and reason at all.