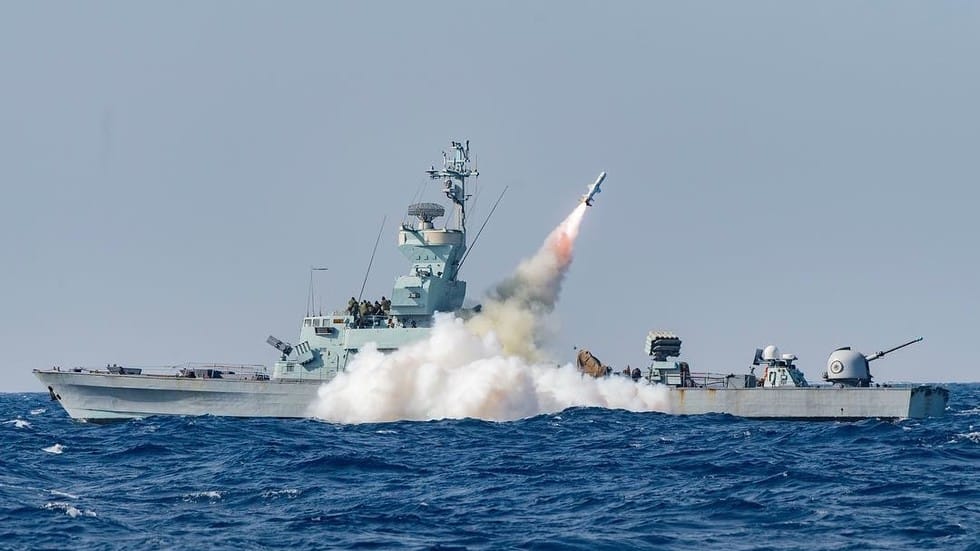 [ Editor’s Note: Bibi attempts to “pull a Trump” with his copycat headline grabbing theatrics today. Gosh, I wonder if it has anything to do with his desperation to get attention off his legal problems and crassly use the Israeli navy do do so.

In a way this is like his doing a Saturday Night Live parody of himself, inviting the world to join in kicking off a Persian Gulf war which would shut down all oil exports from there and trigger worldwide recession with corresponding banking collapse. What’s not to love about that?

And Bibi would then sit back and blame it all on the Iranians and say we should have nuked them long ago, something more and more are posing that maybe should be the other way around. But there is no way to do the Zionistas without hurting innocent people and the precious archaeology there. The thugs there effectively are using the land and its people as their human shield.

If Bibi gets politically nuked in the election by the former general, don’t expect any changes in Israel’s “the sky is falling, the US has to attack Iran for us” mantra. It will continue on and I suspect be even more dangerous as the general will not be talking out of his behind.

Yes, we may have a political regime change in Israel in April, but it will be the theatrical kind. All the threats that Israel represents to the world will still remain, due primarily to the world’s democratic intelligence agencies not taking Israel’s massive espionage operations down which have nothing to do with defending Israel’s interest. The country has been on offense from day one, and every day since.

Israel loans out its immunity enhanced government organizations to serve its joint interests with the Kazarian Mafia. See Gordon’s excellent Intel Drop from this week. The Intel agencies are in the spotlight now though, more then ever before. It’s long past time for them to clean up the mess.

Although there are whispers from the Intel communities about their Israel concerns from time to time, they never use what they have in their archives to take the Israeli threat down and dismantle all of its spy operations.

The Zionista networks are so used to getting away with their work in the open due to their perception of being “untouchable”, they could all be rounded up in a few days. The names are already listed and organizational structures flow charted. It’s just a matter of pulling the trigger… Jim W. Dean ]

Prime Minister Benjamin Netanyahu says Israel is prepared to throw the power of its naval force – and urges the world to join in – to block the Iranian oil shipments circumventing unilaterally imposed US sanctions against Tehran.
–

“Iran is trying to bypass the sanctions on it through the covert smuggling of petroleum via the sea. As these attempts expand, the navy will have a more important role in efforts to block these Iranian actions,” Netanyahu said at a navy cadets’ graduation ceremony in Haifa on Wednesday.

Failing to explain how exactly Israel’s relatively small naval force would impose the suggested blockade against Iranian oil tankers, Netanyahu only emphasized that Israeli sailors are well-trained and adept at carrying out sea missions against adversaries.

Washington sanctioned Iran’s oil, shipping and banking industries last November after President Donald Trump pulled out of the 2015 JCPOA ‘Iran Nuclear Deal’ to applause from Israel and to strong objections from the other signatories of the milestone accord and from Tehran’s business partners.

Aiming to reduce Tehran’s oil exports to “zero,” the US threatened global oil buyers with secondary sanctions. Then, after the pressure failed to achieve expected results, a handful of countries were granted a special exemption, with Washington generously allowing them to continue buying crude from Tehran, for the time being.

ALSO ON RT.COMIDF tries its hand in MS Paint warfare to tell Iran ‘where it belongs’Furious at American bullying tactics, Iran’s armed forces have said they will protect its fleet of oil tankers against any threats that might jeopardize the shipments. Tehran is especially committed to ensuring safe passage through the narrow Strait of Hormuz, which links the Persian Gulf with the rest of the world.

To tackle what it called Iran’s “illicit” economic activity at sea, Israel would need to expand its operating theater. Currently, the country is primarily active in the Mediterranean Sea and the Red Sea areas. Whether or not such potential Israeli missions would yield success is questionable, as Iran has far more superior capabilities at sea.