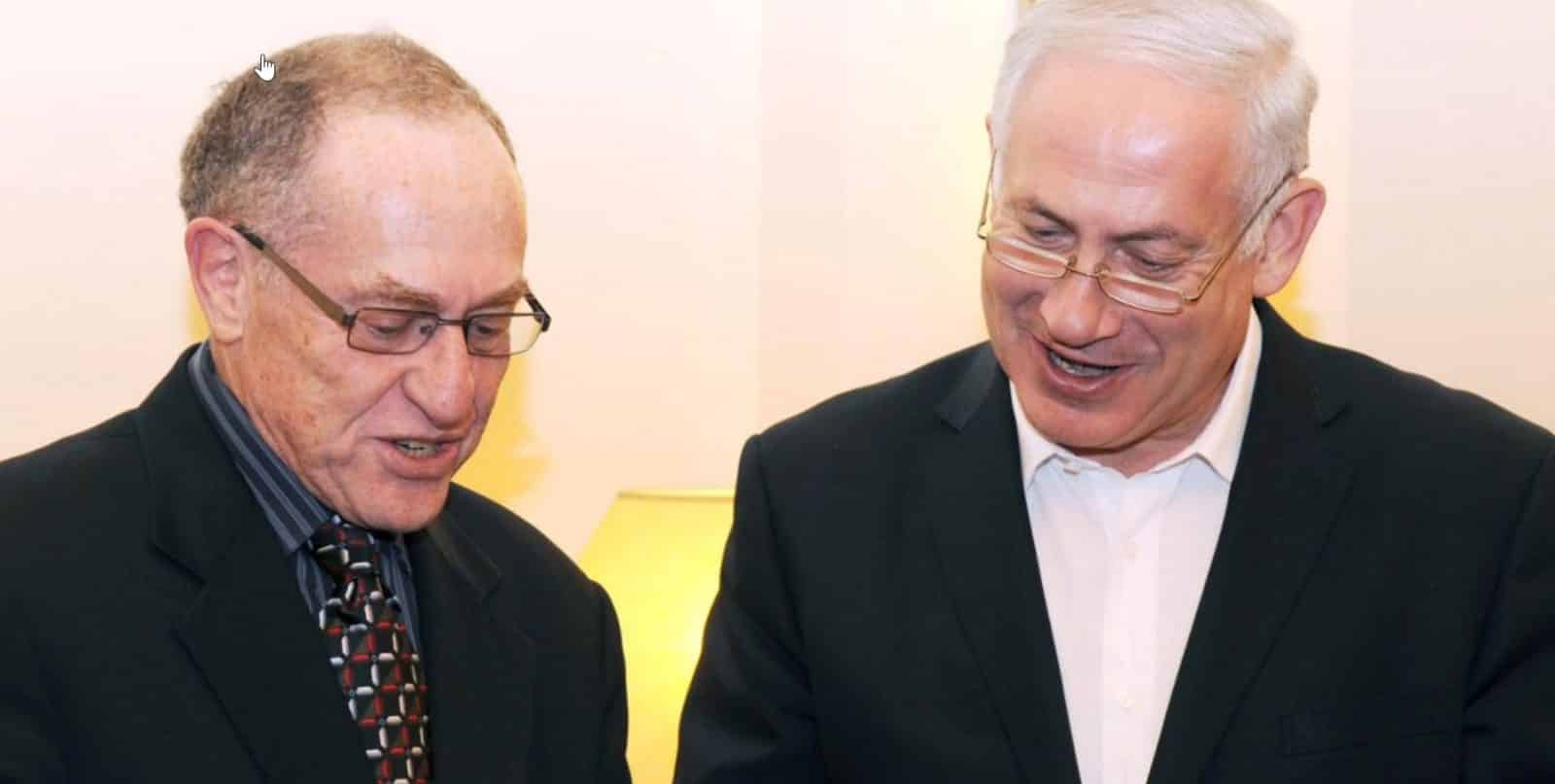 Editor’s note: Dershowitz cut the deal along with Trump “associate” Acosta to hide the records of 30 plus plus plus child rapes that officials are now claiming Dershowitz himself took part in.  There are also claims Trump was a participant in numerous child rapes as well but those went to civil court with Michael Cohen and were handled, we are told, with threats.

Dershowitz is advising  Donald Trump in his fight against impeachment and now represents Israeli Prime minister in his criminal case for bribery and fraud, outlined below.  The Israeli paper, Haaretz,” refers to Dershowitz as “unhinged” and “ludicrous.” … Gordon.

Start your day with this:

Daily Beast: Famed attorney Alan Dershowitz was accused of involvement in billionaire pedophile Jeffrey Epstein’s alleged sex-trafficking ring by an attorney for one of Epstein’s victims, who claimed in federal court on Wednesday that the release of sealed documents will prove it.

Paul Cassell, who represents Virginia Roberts Giuffre, told the U.S. Court of Appeals for the Second Circuit that the testimony of other witnesses will show Dershowitz’s involvement in the alleged trafficking of “his close friend Jeffrey Epstein.”

“When all the records come out it will show that Epstein and [Epstein’s alleged madam Ghislaine] Maxwell were trafficking girls to the benefit of his friends, including Mr. Dershowitz,” Cassell said in oral arguments for a case filed by the Miami Herald to unseal a collection of court documents relating to Giuffre’s now settled lawsuit against Maxwell.

Famed attorney Alan Dershowitz was accused of involvement in billionaire pedophile Jeffrey Epstein’s alleged sex-trafficking ring by an attorney for one of Epstein’s victims, who claimed in federal court on Wednesday that the release of sealed documents will prove it.

Paul Cassell, who represents Virginia Roberts Giuffre, told the U.S. Court of Appeals for the Second Circuit that the testimony of other witnesses will show Dershowitz’s involvement in the alleged trafficking of “his close friend Jeffrey Epstein.”

“When all the records come out it will show that Epstein and [Epstein’s alleged madam Ghislaine] Maxwell were trafficking girls to the benefit of his friends, including Mr. Dershowitz,” Cassell said in oral arguments for a case filed by the Miami Herald to unseal a collection of court documents relating to Giuffre’s now settled lawsuit against Maxwell.

read more at Daily Beast and from Haaretz, Israel:

The day before Attorney General Mandelblit was expected to announce his intention to file corruption charges against the Prime Minister, Bibi wrote a Facebook post quoting an open letter from Dershowitz to Mandelblit. Citing an article published in Haaretz in December, Dershowitz told Mandelblit that if he were to proceed with the charges, he would “endanger democracy and freedom of the press” in Israel.

For 50 years, Dershowitz has been an articulate and effective advocate for Israel, often American Jewry’s most visible and powerful defender of the Jewish state. Why then, at age 80, has he come to the defense of a Prime Minister who has become almost completely unhinged?

Bibi, after all, is the leader who not only toys with corruption but, among a long list of other offenses, fawns over Polish and Hungarian anti-Semites, viciously demonizes his political opponents, and advances the interests of a Kahane-supporting right-wing party.

Bibi’s has more than a few accomplishments, to be sure. But they all begin to fade when set against his stomach-turning antics of recent years. Has it not occurred to Mr. Dershowitz that his enthusiastic backing of Bibi undermines rather than advances Israel’s cause, undoing what has been his life’s work on behalf of Israel?

One possible explanation is that Dershowitz has been prodded to defend Bibi by Sheldon Adelson, the Prime Minister’s long-time patron. As Dershowitz acknowledges in his Haaretz article, he has been providing legal services for Adelson – the same Adelson who has poured tens of millions of dollars into backing Bibi and supporting a free newspaper, Israel Hayom, that is devoted to a no-questions-asked defense of Bibi’s every move.

No one knows exactly how much compensation Dershowitz has received from Adelson in recent years for his legal work, but it is difficult to understand how Dershowitz can be seen as truly objective about either Adelson or Netanyahu while on Adelson’s payroll.

Still, since there is no precise way to measure Adelson’s influence on Dershowitz, we should judge Dershowitz’s support for Bibi on its merits.  And this support, it should be noted, includes not only the most recent memo and Haaretz article, but innumerable articles and interviews produced by Dershowitz on Bibi’s behalf. They were written during the four-year period that Israeli authorities have been considering an indictment of the Prime Minister.

In his Haaretz article, for example, in reference to case 1000, Dershowitz makes the seemingly reasonable assertion that “(e)veryone acknowledges that friends are permitted to give wine and cigars to friends, even if the recipient is the prime minister.” The only problem, he says, might be if Bibi took too many gifts. But since the law does not specify how many are too many, there cannot be any basis for criminal prosecution.

But Dershowitz, of course, is playing word games here, and disguising Bibi’s sleazy intent in the process.

In the first place, a gift is freely given, but if the prime minister asked for the cigars and champagne – which he frequently did, as the indictment clearly states – then we are not talking about a gift at all but about a payment for a favor.

Furthermore, a box of cigars – or ten boxes, or even 100 boxes – is a gift, but when we are dealing with hundreds of thousands of dollars of merchandise, the notion of a harmless gift between friends is absurd. Add to this mess the fact that the Prime Minister intervened for his gift-giving “friend” with the U.S. Secretary of State, and what we have, at least arguably, is a crime.

Or consider Dershowitz’s claim that just as in America a sitting president cannot be indicted, Israel too should defer criminal prosecutions of Prime Ministers until after their term in office.

This argument, made in a front-page interview with Dershowitz published in Israel Hayom in 2017, is also seemingly reasonable. The burdens of office for a serving Prime Minister are onerous, and the potentially disruptive nature of police investigations could impact the efficient functioning of the state, not to mention the security of her citizens. And Dershowitz notes that the benefits would accrue to incumbents of all parties, and that had such a law been in effect in the 1970s, Yitzhak Rabin would not have been forced from office for financial infractions.

But once again, upon reflection, the argument is both ludicrous and dangerous.

While it is true that the United States does not allow a criminal indictment of serving presidents, and neither does France, both countries have term limits for their presidents. But Israel has no term limit for prime ministers.  And prime ministers are allowed to call early elections at will, a decision that can discourage indictments by an attorney general.

Furthermore, if Netanyahu is elected to a fifth term in April, his supporters have indicated interest in passing a basic law that would protect him from prosecution, while avoiding any reference to term limits.

In short, what Dershowitz is proposing as a protection for democracy does precisely the opposite, creating the possibility that a Prime Minister serving multiple terms can indefinitely escape indictment for a serious crime.

And any comparison between Netanyahu and Rabin is a profound insult to the latter’s integrity. Netanyahu has been embroiled in one investigation after another since the day he took office. Rabin, on the other hand, stepped down voluntarily for a crime so minor that no one today would even mention it, and which was committed not by him but by his wife.

When it comes to honesty and integrity, Netanyahu is no Rabin.

And then, of course, there is the utterly incredible claim by Dershowitz that what Donald Trump has called the “deep state,” consisting of judicial authorities and other elements of the political establishment, are at work in Israel – as they are in the United States – to topple the elected leader for their own purposes.

In his Israel Hayom interview, Dershowitz focuses on Bibi’s many foreign policy accomplishments, such as his successes in exploiting the Sunni-Shia rift to Israel’s advantage and his “progress, as small as it may be, with the Palestinians.” Dershowitz suggests that Bibi’s enemies are intent on diverting him from his path to peace by finding a way to indict him criminally.

At first glance, one wonders if these points are meant as a joke.

Where exactly is the modest progress with Palestinians that Dershowitz refers to? Also, why would the Israeli left, the implied villains, oppose this supposed progress – or, for that matter, progress with Sunni states?

And does Dershowitz really believe that Attorney General Avichai Mandelblit, a man of unimpeachable honesty and character, would attempt to subvert the Netanyahu administration to undermine his foreign policy successes, real or imagined?

Dershowitz is not wrong about everything. He makes some reasonable points about the dangers that the proposed indictment poses to freedom of the press, although the irony is that his client, Sheldon Adelson, has done more than anyone to undermine freedom of the press in Israel.

But on balance, reviewing his public statements in recent years about Netanyahu’s alleged crimes, I have to wonder what has happened to Dershowitz, once a hero to me and to many other lovers of Israel.

Does he, as some have suggested, simply no longer understand the political realities in Israel today? Has he bowed to the will of Sheldon Adelson and his far-right political views? Has he become caught up in the pernicious culture of Fox News, where, no matter how much he calls himself a liberal, liberal views are never welcome?

Eric H. Yoffie, a rabbi, writer and teacher in Westfield, New Jersey, is a former president of the Union for Reform Judaism. Twitter: @EricYoffie