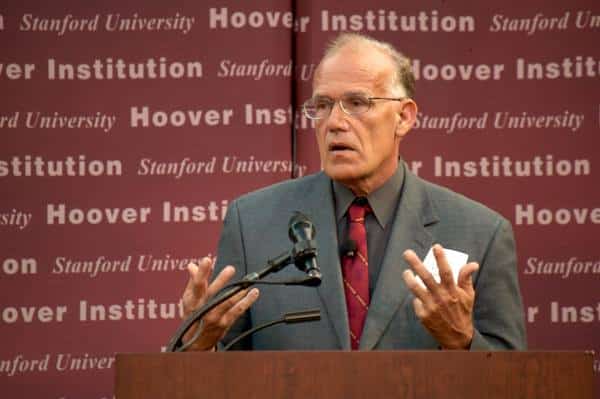 Victor Davis Hanson is a military historian and classicist. He is a professor emeritus at California State University and is currently the Martin and Illie Anderson Senior Fellow in classics and military history at Stanford University’s Hoover Institution. He is the author of books such as A War Like No Other: How the Athenians and Spartans Fought the Peloponnesian War, Carnage and Culture: Landmark Battles in the Rise to Western Power, and Who Killed Homer: The Demise of Classical Education and the Recovery of Greek Wisdom.

To be fair, those books aren’t bad at all. Who Killed Homer in particular has its place in the academic battle for teaching the classics. But Hanson is a complete disaster when it comes to examining US foreign policy and perpetual wars in the Middle East and elsewhere. Hanson has an entire chapter in The Savior Generals praising the debacle in Iraq which devastated the region in 2003.[1]

To rescue himself and the neoconservative movement from intellectual and political oblivion, Hanson compared the Iraq war with the wars in 1777, 1941, and 1950, and moved on to say that they “led to massive American casualties and, for a time, public despair.”[2]

Hanson did not make any attempt to interact with the scholarly evidence on this issue.[4] He did not even discuss the sodomy and torture that occurred at Abu Ghraib.[5] Not once did he say even in passing that prior to the war in Iraq, water-boarding was like a foreign language to America. Not once did he mention that George Washington repudiated torture.[6]

We all know by now that torture was routine in Abu Ghraib, and forcing prisoners to have sex with one another and sodomizing teenagers were fair game. One prisoner testified that he saw one officer

“fucking a kid, his age would be about 15-18 years. The kid was hurting very bad and they covered all the doors with sheets. Then when I heard the screaming I climbed the door because on top it wasn’t covered and I saw [name blacked out], who was wearing the military uniform putting his dick in the little kid’s ass. I couldn’t see the face of the kid because his face wasn’t in front of the door. And the female soldier was taking pictures.”[7]

What’s more even interesting, “150 inmates were crammed into cells designed for 24.”[8] Abu Ghraib, as one writer put it, was “a hell-hole.”[9] Torture was also routine in Afghanistan, where adolescents were beaten with hoses “and pipes and threats of sodomy.”[10] These acts were not done in the dark. Cambridge University published similar reports in a book that is more than 1200 pages long.[11] These acts were also testified to by psychiatrists such as Terry Kupers.[12]

So for Hanson to wiggle out of this body of scholarship is complete dishonesty.

Since the war in Iraq turned out to be a total mess, and since Hanson supported the war from its inception,[13] he has to marshal impressively incoherent and irreducibly irresponsible arguments so that he can simultaneously maintain his Neoconservative equilibrium and justify his lucrative existence as a military historian at the Hoover Institution, which is largely neoconservative in its political orientation.

More importantly, Victor Davis Hanson is a Neocon ideologue and a warmonger. He declared unapologetically:

“I came to support neocon approaches first in the wars against the Taliban and Saddam, largely because I saw little alternative—in a post-9-11 effort to stop radical Islam and state sponsors of terror—to removing such odious enemies, and did not think leaving the defeated in power (as in 1991), or leaving in defeat (as in Lebanon), or installing a postbellum strongman was viable or in U.S. interests.”[14]

Well, Hanson would prefer deliberate lies over truth. The war in Iraq was never about fleshing out an alternative to the Neocon ideology precisely because the Neocons themselves knew that Saddam had no WMDs!

For example, when he was told by deputy national security advisor Stephen Hadley that there was no link between Al Qaeda and Saddam Hussein, Wolfowitz responded with certainty, “We’ll find it. It’s got to be there,”[15] which is another way of saying that if it does not exist, they would make it up.

What we are seeing here is that Hanson has intellectually been deteriorating at an alarming rate. He lost his credibility as a serious thinker when he maintained that Iran planned to promote a Jewish Holocaust, despite the fact that Jews in Iran universally called Netanyahu an “insane vampire” for perpetuating similar views.[16] And Jimmy Carter? Hanson argues that Carter is right in line with anti-Semites.[17] Ignoring Israel’s ethnic cleansing of the Palestinians in the 1940s and beyond, Hanson begins to invent history:

“[Israel] fought three existential wars over its 1947 borders, when the issue at hand was not manifest destiny, but the efforts of its many enemies to exterminate or deport its population.”[18]

Sounding like a mad man who will not listen to the voice of reason, Hanson espouses the view that for more than a half-century, the Arabs want to push “the Jews into Mediterranean.” No serious scholarship. No intellectual or historical rigor or reasonable defense. Just one assertion after another. Hanson continues,

“Over 500,000 Jews have been ethnically-cleansed from Arab capitals since 1947, in waves of pogroms that come every few decades.”[19]

The source and historical evidence? You just have to take Hanson at his word. The statement is self-referentially true because Hanson says so! It is the same sort of circular argument and tautology that we constantly see in the so-called scientific discussion, most notably in the idea behind the survival of the fittest. Why did it survive? Because it is the fittest. How do you know it is the fittest? Because it survived!

Yet years before Hanson marshaled his historical fiction, Jewish historians across the Atlantic and even in Israel have told us quite the opposite: Israel has ethnically liquidated the Palestinians.[20] Listen again to Israeli historian and flaming Zionist Benny Morris:

Israel has always contributed to the demise of peace and harmony in the Middle East. The 1982 massacre is a classic example, where Israeli military allowed Lebanese militia to attack Palestinian refugees; they “raped, killed and dismembered at least 800 civilians, while Israeli flares illuminated the camps’ narrow and darkened alleyways.”[22]

One year later, an Israeli investigation commission found Israel “indirectly responsible” for the massacre, and Ariel Sharon an accomplice.[23] How did the Israeli officials get the U.S. involved? According to declassified documents found in the Israel State Archives, they convinced U.S. officials that Beirut had terrorist cells, and in the end allowed the slaughter of Palestinian civilians whom the U.S. had previously vowed to protect.[24] Ariel Sharon said that Beirut had from 2,000 to 3,000 terrorists.

The American envoy in the Middle East, Morris Draper, basically said that Sharon was lying. Lawrence S. Eagleburger, then Secretary of State, declared that “we appear to some to be the victim of deliberate deception by Israel.”[25]

During his conversation with Sharon, Draper knew that the United States was not standing behind Sharon’s evil pursuit, but Sharon ended an agreement on his own terms. It was reported that Draper told Sharon,

“You should be ashamed. The situation is absolutely appalling. They’re killing children! You have the field completely under your control and are therefore responsible for that area.”[15]

After the massacre, Ronald Reagan, himself a Zionist, was outraged. Secretary of State George P. Shultz declared that the United States was also an accomplice in allowing Israel to manipulate them in order to massacre civilians.

But no sanctions were pronounced on Israel. Nothing was done. Why? Nicholas A. Veliotes, then the assistant secretary of state for Near Eastern affairs, gave us an indirect answer: “Vintage Sharon. It is his way or the highway.”[26] Scholar Seth Anziska declares,

“The Sabra and Shatila massacre severely undercut America’s influence in the Middle East, and its moral authority plummeted.”[27]

How would Hanson respond? Would he dismiss the archival documents that both Morris and Ilan Pappe present in their studies? Would he run away from the fact that Israel has been a problem child in the Middle East? Well, we probably will never know because Hanson does not address historical studies like this. He prefers to stay silent and ignore this body of scholarship. 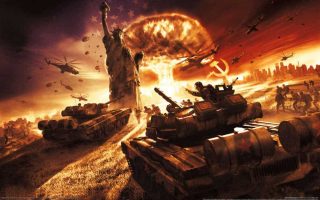 What has Hanson been doing lately? Well, he has been crowning Trump as a hero. In his recent book The Case for Trump, he argues: “The very idea that Donald Trump could, even in a perverse way, be heroic may appall half of the country.”[28]

It gets worse: “Tragic heroes are often loners. They are aloof by preference and due to society’s understandable unease with them.” In that sense Trump, says Hanson, is comparable to Ajax, Antigone, Oedipus Rex, and Philoctetes.[29] 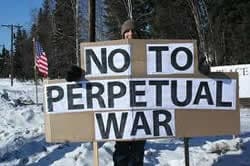 There is more to Trump than meets the eye and ear. His administration has recently articulated that allied countries ought to pay for hosting US Troops! Here it is:

“Under White House direction, the administration is drawing up demands that Germany, Japan and eventually any other country hosting U.S. troops pay the full price of American soldiers deployed on their soil — plus 50 percent or more for the privilege of hosting them. In some cases, nations hosting American forces could be asked to pay five to six times as much as they do now under the ‘Cost Plus 50’ formula.”[31]

Why doesn’t the administration address the fundamental question? Is sending US troops virtually all over the planet congruent with what the founding fathers clearly said? And if the answer is no, how can Trump be a hero when he is essentially destabilizing the very basis of US foreign policy as articulated by the very people who built America? Moreover, is the Neocon view of the world compatible with the moral and political order at all?

Trump, like his predecessors, is a warmonger and puppet. He has even planned to increase the military budget while “slashing domestic spending.”[32] In other words, supporting perpetual wars in the Middle East and elsewhere, sending at least three billion dollars to Israel every year, and being a supporter of the war machine are more important than taking care of the average American and listening to officers like by Maj. Danny Sjursen.[33]

So when will Victor Davis Hanson wake up? When will he start making some common sense?