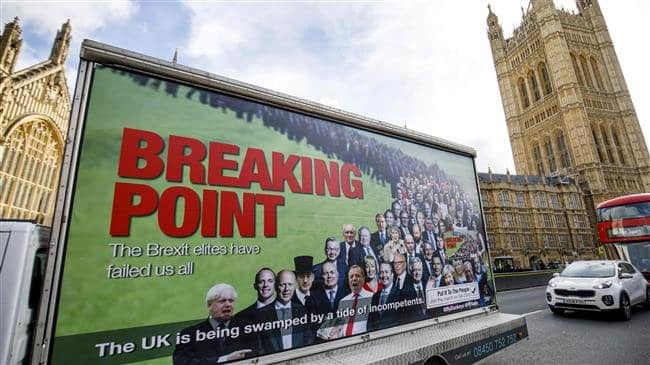 [ Editor’s Note: This story comes as no surprise. If there is one thing banksters and even legitimate financial firms do not like it is instability and uncertainty. Not only is it a foot on the brake pedal of asset appreciation but also increases the chances of taking a firm down an elevator shaft without the comfort of the elevator.

And then there is the issue of if you leave too late all the choice office space have already been grabbed up by those ahead you, plus leaving your firm to pay higher rentals due to the mini-boom that would be created by a hard Brexit in cities catching those moving.

Stockholders tend to get into lynching mode and go looking for some CEO or boardroom necks to soften their pain with. As the old saying goes, “Vengeance is best served cold”.

Meanwhile, the British elites, those still in a trance, are talking about their becoming a “world military power” when stories are already out that they cannot staff the military levels they have now, especially in the Navy.

Those staff shortages and critical skill set talent holes create a similar “who to blame” hunt for breakdowns and behind schedule problems. But in the military command structure the doo doo always flows down when the hunt for scapegoats begins.

I wish no ill will to the British people. Most countries are suffering on variety of grand larceny political establishments, with the Brits having an extra layer with its peerage class. But I am still suspicious that the  EU might not be unhappy to see an economic mess for the British pullout to give EU countries thinking of the same route something sour to ponder.

Sure, the EU would be better off economically to have Britain stay, but the risk of more countries following suit would be a terminal cancer, whereas cutting off a hand could be the best long term solution, despite the pain.

As our mothers use to say when chastising us for cutting corners when doing work, “No pain, no gain”, and they were generally right… Jim W. Dean ]

An independent think tank produces the yet-most intricate report on the proportions of the losses, which the British economy is suffering as a result of Brexit.

New Financial issued the report on Monday, showing how heavyweight international institutions were enacting an exodus from the country as it is about to leave the European Union. Britain would set out on the departure — decided on during a June 2016 referendum — on March 29, unless the divorce is delayed amid bickering between Number 10 and the Parliament over a deal on future relations with the 28-nation bloc.

The think tank said gearing up for the departure, more than 275 financial firms were moving a combined £924 billion ($1.2 trillion) in assets and funds and thousands of staff from Britain to the EU.

Those, it added, were mostly choosing Dublin, Luxembourg, Paris, Frankfurt, and Amsterdam as their next hubs.

“Business will continue to leak from London to the EU, with more activity being booked through local subsidiaries,” said William Wright, founder and managing director of New Financial. “This will reduce the UK’s influence in European banking and finance, reduce tax receipts from the industry, and reduce financial services exports to the EU,” he added.

Ten large banks and investment banks are together moving £800 billion ($1 trillion) of assets from Britain, the report noted. That equals a 10-percent shift in banking and finance activity, which, in turn, cuts UK tax receipts by about one percent, it added.

London takes the brunt of the departures, although it would retain its might as a financial epicenter, said the company.

Last month, a senior economist at the Bank of England (BoE) said Britain had lost £40 billion ($51 billion) a year since Britons voted to leave the European Union.

A key economist in UK says the country lost £800 million a week since Brexit referendum in June 2016.

Gertjan Vlieghe, a member of the BoE’s monetary policy committee, said the loss amounted to a 2-percent annual loss on the UK economy.