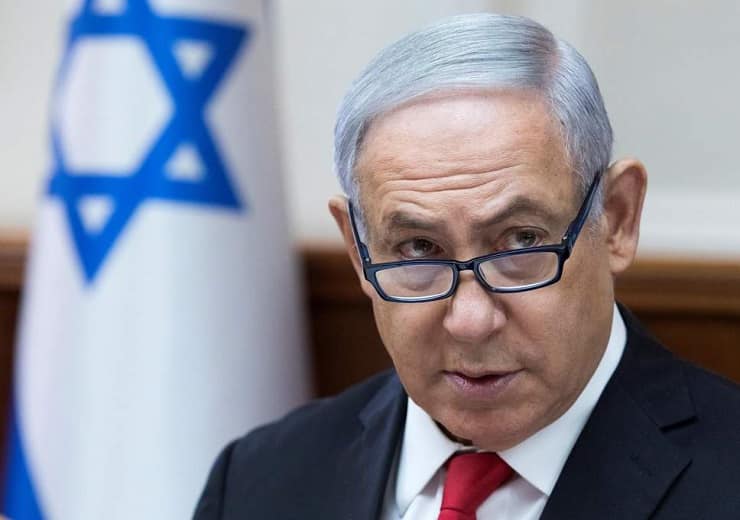 [ Editor’s Note: We did not know if NEO would publish this piece, as it definitely has some hair on it; but here it is reprinted, another Gordon classic.

Needless to say, US mainstream media would not have touched it with a 10-foot pole. It has been in the bag for a long time. But even some of our billionaire independent platforms realize that, although a stinger missile had not brought down an airliner in a long time, a corporate jet would be easy pickings for someone having been given the OK to proceed with such an attack to make an example to others.

But Gordon thinks that Dersh could be another Achilles’ heel for Trump and Bibi. The Epstein case wrapped up in cotton balls with Mr. Acosta at the wheel to produce the sweetheart deal that Epstein got, which even included release during the day to go to work, and to return only at night to be in jail. That bothers me more than a little bit.

We salute those pushing to put the spotlight back on this sordid case, with the Justice Department sticking to its guns that all rules and procedures were followed. But many do feel that one of the rules followed was to allow a political fix for a well-connected pedophile.

Without further ado, Mr. Duff will now take the hammer to bang away at those who should be in the slammer, way down in Alerbamer (misspelled on purpose)… Jim W. Dean ]

A series of scandals have come together, mostly around Israeli Prime Minister Netanyahu, and threaten the world. While under criminal indictment in Israel, Netanyahu is running for re-election, telling the people of Israel that he has the full backing of American and Russian leaders.

More than that, his claims intimate that both Trump and Putin support Israel against Iran and even Syria, claims that are not credible. Worse still, Netanyahu’s lawyer, famed Israel promoter Alan Dershowitz, now 80, is under investigation in the US for crimes related to child rape. From the Daily Beast:

“Famed attorney Alan Dershowitz was accused of involvement in billionaire pedophile Jeffrey Epstein’s alleged sex-trafficking ring by an attorney for one of Epstein’s victims, who claimed in federal court on Wednesday that the release of sealed documents will prove it.

Paul Cassell, who represents Virginia Roberts Giuffre, told the U.S. Court of Appeals for the Second Circuit that the testimony of other witnesses will show Dershowitz’s involvement in the alleged trafficking of ‘his close friend Jeffrey Epstein.’

‘When all the records come out it will show that Epstein and [Epstein’s alleged madam Ghislaine] Maxwell were trafficking girls to the benefit of his friends, including Mr. Dershowitz,’ Cassell said in oral arguments for a case filed by the Miami Herald to unseal a collection of court documents relating to Giuffre’s now settled lawsuit against Maxwell.”

Then we turn to Politico, where Trump Labor Secretary, Alex Acosta, long considered “highly unqualified” for his position, is tied to the criminal coverup. It was Acosta that ordered the records of 30 child rapes sealed, rapes where not only Epstein is accused but also Alan Dershowitz and Donald Trump. From Politico:

“A federal appeals court panel signaled Wednesday that it is strongly inclined to set in motion a process likely to expose more sordid details in the politically charged scandal surrounding Jeffrey Epstein, the wealthy financier and philanthropist whose relatively cushy plea deal on underage-sex charges a decade ago has become a political liability for Labor Secretary Alex Acosta.

Sparks flew during arguments before the 2nd Circuit Court of Appeals in Manhattan as a lawyer for Virginia Roberts Giuffre, an Epstein accuser, repeatedly reiterated his client’s claim leveled several years ago that the Harvard law professor Alan Dershowitz not only defended Epstein but also had sex with some of the women Epstein victimized.

About 20 Democratic lawmakers have called for Acosta’s resignation, saying Acosta’s involvement in what they view as a sweetheart deal for Epstein makes Acosta unsuitable for a Cabinet post.

The Justice Department’s Office of Professional Responsibility has also opened an investigation into the matter.”

As the runup to the Israeli elections enters high gear, Netanyahu, under indictment for numerous corruption charges, becomes more and more a threat.

Regionally, one thing is clear, his program of attacks on Palestinian civilians, his manipulation of tensions with Iran and his attacks on Syria are tied to his personal legal problems and, at home, Netanyahu is being buried.

First of all, he has the worst lawyer in the world, as even the Israeli papers are recognizing Alan Dershowitz as a liability even though they have yet to acknowledge how Israel’s greatest supporter is now an alleged child rapist as well, if US mainstream media reports are to be believed. From Haaretz:

“For the four years Netanyahu has been under criminal investigation, Dershowitz – once a great defender of Israel’s values – has been his number one fan, serving up increasingly desperate and sleaze-appeasing apologetics. Why?

For 50 years, Dershowitz has been an articulate and effective advocate for Israel, often American Jewry’s most visible and powerful defender of the Jewish state. Why then, at age 80, has he come to the defense of a Prime Minister who has become almost completely unhinged?

Bibi, after all, is the leader who not only toys with corruption but, among a long list of other offenses, fawns over Polish and Hungarian anti-Semites, viciously demonizes his political opponents, and advances the interests of a Kahane-supporting right-wing party.

Bibi’s has more than a few accomplishments, to be sure. But they all begin to fade when set against his stomach-turning antics of recent years. Has it not occurred to Mr. Dershowitz that his enthusiastic backing of Bibi undermines rather than advances Israel’s cause, undoing what has been his life’s work on behalf of Israel?

One possible explanation is that Dershowitz has been prodded to defend Bibi by Sheldon Adelson, the Prime Minister’s long-time patron. As Dershowitz acknowledges in his Haaretz article, he has been providing legal services for Adelson – the same Adelson who has poured tens of millions of dollars into backing Bibi and supporting a free newspaper, Israel Hayom, that is devoted to a no-questions-asked defense of Bibi’s every move.”

We might also add that both Netanyahu and Trump “work for” Adelson, meaning they represent Adelson’s “business interests,” including the unseemly ones, when they travel as heads of state. This is part of Netanyahu’s legal problems and may eventually send Donald Trump to prison as well.

Moves in the US, in 23 states, and now in proposed laws, will criminalize any mention of these UN actions or open criticism of Israel, even in the press. Academics can be jailed for reporting on Israel’s long record of human rights abuses, the UN lists them as “number one rights abuser in the world,” as a veil of censorship now descends across the US.

What we seem to have is a world spinning into the abyss, with much of the responsibility lying with Benjamin Netanyahu and his personal “overreach” to the point of delusions of grandeur.

His biggest failure is American public opinion, now increasingly termed as “anti-Semitic,” charges thrown around against Poland, Hungary and other nations as well. The broad hatred of Donald Trump by large sectors of the US population and Trump’s ties to Israel through his son in law, Jared Kushner, perhaps the most resented individual in Washington history, has now crossed party lines.

Where Israel still has broad support from both parties, even where American interests are damaged, that support is increasingly being questioned from both the left and right by those who see Israeli influence as a major factor in America’s defense spending morass and the series of unending wars that have lowered America’s standard of living.

Israel, in some ways, is the easy target to blame, as it “ham handedly” pushes politicians and media around through smears and threats, increasingly easy to recognize and increasingly resented by the public.

Behind this, of course, is the gulf between rich and everyone else in the US, with the middle class slowly disappearing as capital rapidly moves into the hands of the few. Wages and benefits, social protections commonplace in Europe, are disappearing in the US. Attacks on Obama’s health care reforms, which were only stop-gap measures at best, have pushed medical care out of reach for tens of millions.

Scandals such as recent findings that Monsanto’s Round Up may be responsible for the cancer epidemic that has killed millions, exacerbated of course by lessened availability of health care, this and endless political and economic scandals has radicalized sectors of the American people to question political “norms,” among them blind support for Israel and now institutionalized hatred of Islam and Russia as well.

The focus is Israel and the face of Israel is Netanyahu, a clownish figure, a face too often seen, and one now tied to the sacrifices a generation of Americans have made, thousands of deaths, $15 trillion in debt, low wages, a world that hates America and it is his face that is blamed, no longer bin Laden or other fake Hitleresque figures.

Past that is the nature of the narrative, corruption, child sex, endless lying, the filth and depravity of a third-rate TV drama.


Author Details
Gordon Duff, Senior Editor
Gordon Duff is a Marine combat veteran of the Vietnam War. He is a disabled veteran and has worked on veterans and POW issues for decades. Gordon is an accredited diplomat and is generally accepted as one of the top global intelligence specialists. He manages the world’s largest private intelligence organization and regularly consults with governments challenged by security issues.

NEO: 9/11, a Personal Journey Down the Rabbit Hole