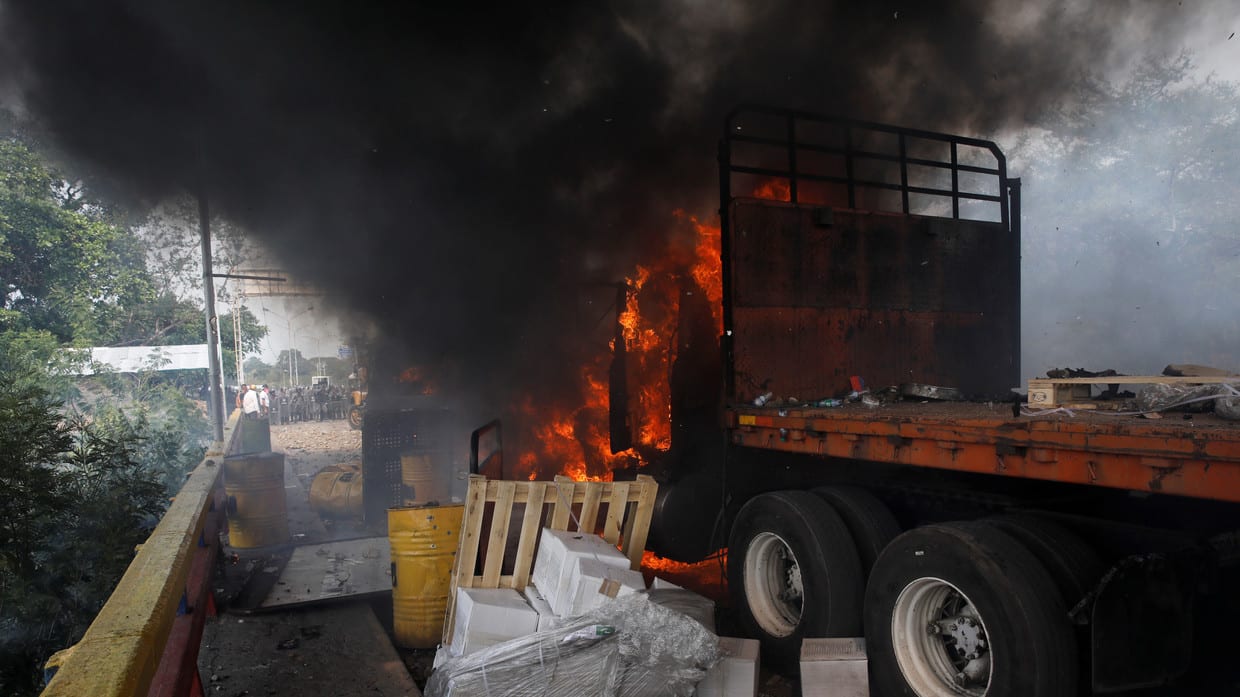 The New York Times, to its credit, has revealed that the United States categorically lied about President Nicolás Maduro. They said that Maduro has specifically “had torched a convoy of humanitarian aid as millions in his country were suffering from illness and hunger.”[1]

Mike Pence, said the Times, was one of the first persons to come out and make one preposterous statement after another. Pence declared that “the tyrant in Caracas danced” as his henchmen “burned food & medicine.”[2]

Similarly, “the State Department released a video saying Mr. Maduro had ordered the trucks burned. And Venezuela’s opposition held up the images of the burning aid, reproduced on dozens of news sites and television screens throughout Latin America, as evidence of Mr. Maduro’s cruelty.”[3]

It appeared that the act was a false flag, perpetrated by the opposition group itself. “The opposition itself, not Mr. Maduro’s men, appears to have set the cargo alight accidentally. Unpublished footage obtained by The New York Times and previously released tapes — including footage released by the Colombian government, which has blamed Mr. Maduro for the fire — allowed for a reconstruction of the incident. It suggests that a Molotov cocktail thrown by an antigovernment protester was the most likely trigger for the blaze.”[4]

Once again, who is supporting the opposition group? The Zionist States of America. The NYT itself reported that the US has poured at least $20 million to “Guaidó’s side,” which is another way of saying that the United States has a hand in which the situation in Venezuela is loused up.[5] No one with an ounce of common sense can deny this anymore.

The interesting thing is that New World Order agents and ethnic cleansers like Elliott Abrams don’t even care anymore that much of the world is keeping an eye on their diabolical activities in the region. Ilhan Omar was right when she said that

“Trump and Elliott Abrams cannot be trusted to tell the truth about what’s happening in Venezuela. We must continue to question the narratives they provide and promote dialogue instead of intervention.”[6]

Dialogue is a frightening thing for the New World Order. Why? Because dialogue itself presupposes that there is a political order which obviously forbids and condemns double standards and hypocrisy.

Dialogue also invokes practical reason implicitly. And when practical reason is excluded from any political or intellectual project, then contradiction, blatant dishonesty, illogical leaps, and sometimes deliberate deceptions and categorical lies would be the end result. That is one reason why New World Order agents cannot stand dialogue and practical reason. But whether they like it or not, they are doomed to fail precisely because, as Hegel and Solzhenitsyn pointed out, you cannot fight against reason and win.