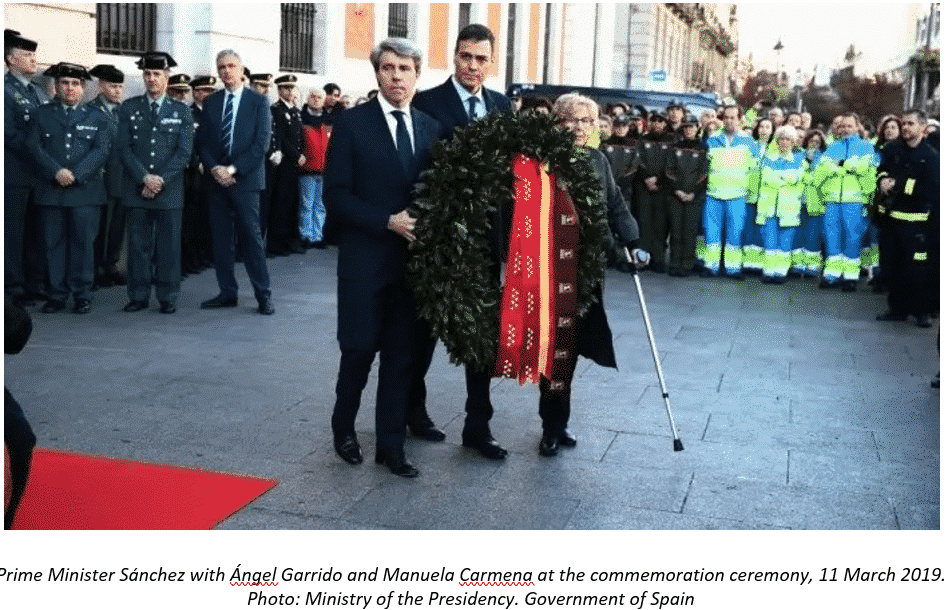 Prime Minister Sánchez with Ángel Garrido and Manuela Carmena at the commemoration ceremony, 11 March 2019. Photo: Ministry of the Presidency. Government of Spain

Now, new details come to light about how the right-wing People’s Party PP wanted to ascribe the most serious attacks in Europe to other perpetrators with Fake News

Today, Monday, in the Spanish capital, the victims of the worst attack to date in Europe, which shook Madrid, Spain and the whole of Europe 15 years ago, were commemorated. Many victims feel as if the Islamist attacks had only happened “today” [1], as exactly as they have the events in mind when bombs exploded in four suburban trains in the morning rush hour.

193 people were killed and more than 1,000 injured. The attacks in New York on 11 September were less than three years ago, when Madrid became the target of radical Islamists and the city was transformed into an inferno by the worst attack in Europe.

The then ruling ultraconservative People’s Party (PP) under José María Aznar had immediately tried to blame the massacre on the Basque underground organisation ETA. She wanted to distract from a connection to the illegal war against Iraq, in which Aznar led Spain alongside the USA and Great Britain [2], although 90% of the population in the country had spoken out massively against this participation.

We know from today that the attempts to attribute the attacks to ETA have been pushed forward against better knowledge. By 3 p.m. on 11 March 2004, everything was actually clear. Previously, a car had been found used by the terrorists. And in this car not only a “cassette with Koran verses” was found, but also immediately “traces of Goma 2 Eco“. The head of the unit for the defusing of explosives (Tedax) explained this in an interview [3].

Thus, according to Juan Jesús Sánchez Manzano, it was already clear at that time, when Telepolis had banished the story of the ETA perpetrators to the fairytale realm [4], that it was definitely not the Basques. ETA mostly used Titadyn brand stolen explosives in France and not the Spanish Goma 2. Moreover, such attacks did not fit in any way with their actions. In spite of everything, even after her official denial [5], she was usually still considered a perpetrator.

The head of the Tedax says that even before the Goma 2 discovery there had been “indications of an act by jihadists“. When the bomb bags were found in the stations El Pozo and Atocha, the Tedax officials could determine that it was a white explosive and not a reddish one like Titadyn. In addition, the devastations had pointed out early on that a stronger explosive than Titadyn must have been used. “With absolute certainty the ETA perpetration was excluded and this was mediated on 11 March at 15 o’clock to the police guidance“.

In the course of the interview, Sánchez Manzano describes how, despite this clear situation, the ETA lie was knitted shortly before the elections on 14 March. At 17.35, telegrams were sent by the Aznar government to the international organisations and embassies in which ETA was assigned the perpetrators. Representatives of the major media were even personally attuned to this line by Aznar.

Apology to the UN

At the insistence of Spain, the United Nations Security Council (UN) adopted Resolution 1530 on 11 March, condemning in the strongest terms the “attacks in Madrid by ETA“, which was unanimously adopted and can still be read today [6]. A few days later Spain had to apologize to the UN [7], which had to correct the resolution.

The traces would have led over the detonators besides fast to Asturias and not into the Basque country. Any policeman who had already worked on ETA could have ruled out their perpetration. Because she is dependent on her social basis and would have killed herself with such an attack against ordinary people, because her support would have been withdrawn immediately.

What is clear is that the lie structure built up by Aznar, his PP and the associated media could not be kept for long and that people in Spain, too, soon realised that they were being led up the garden path. Soon there were spontaneous mobilizations [9]. Ultimately, it became apparent on election Sunday that lies also have short legs in Spain. Instead of getting the predicted absolute majority of seats, the PP lost the elections [10].

As has been pointed out several times at this point, much has come to light about the Enlightenments, but many dark spots have also remained. It is known that it was spies of the security forces who, practically under supervision, supplied the explosives to the Islamists [11]. And there were secret service agents and policemen involved in the events [12].

But only a few of them were called to account, there were only pawn victims. The trial ended in 2007 with a strange feeling that there is still much to be clarified, especially about the involvement of the security forces [13].

This is particularly interesting in view of the attacks in August 2017 in Barcelona and Cambrils, Catalonia, because there are many parallels. In this case, the head of the troop was an informant for the Spanish security forces [14]. They did not pass on information about Abdelbaki Es Satty, the Imam of Ripoll, to their Catalan colleagues, which would presumably have prevented the attacks with 17 dead.

The information did not even flow after Es Satty itself flew into the air to produce large quantities of explosives. That alone prevented perhaps an even greater massacre like the one in Madrid in 2004. As is now known, a game by FC Barcelona or the Sagrada Familia was also one of the objectives [15].

If once the chief of the Madrid assassins Allekema Lamari about a “judge’s mistake” was released early from Spanish prison, after he got visit of a secret service employee, the convicted drug dealer Es Satty was also released early after visits of officials of the Guardia Civil. Surprisingly, he was not deported to Morocco, as expressly stated in the verdict.

Also in this case the interest in official clarification is plentifully limited. The three major Spanish parties together prevented the Imam’s links with the security forces from being investigated in Parliament [16].

In spite of everything, further details have become known in the meantime. The newspaper Público recently published that “the state security forces controlled the head of the massacre until the last moment” [17]. Did they really not notice that the terrorist cell hoarded 120 gas cylinders to fill them with the acetone peroxide (TATP) it produced itself?

They wanted to produce up to 500 kilograms of the most popular explosive among jihadists. During the investigations that the Catalan parliament was able to carry out, it became clear that Spanish security forces had repeatedly inquired about the imam until shortly before the attacks. It is incomprehensible to victims that the reconnaissance has even been blocked. And one really wonders what there is to hide.