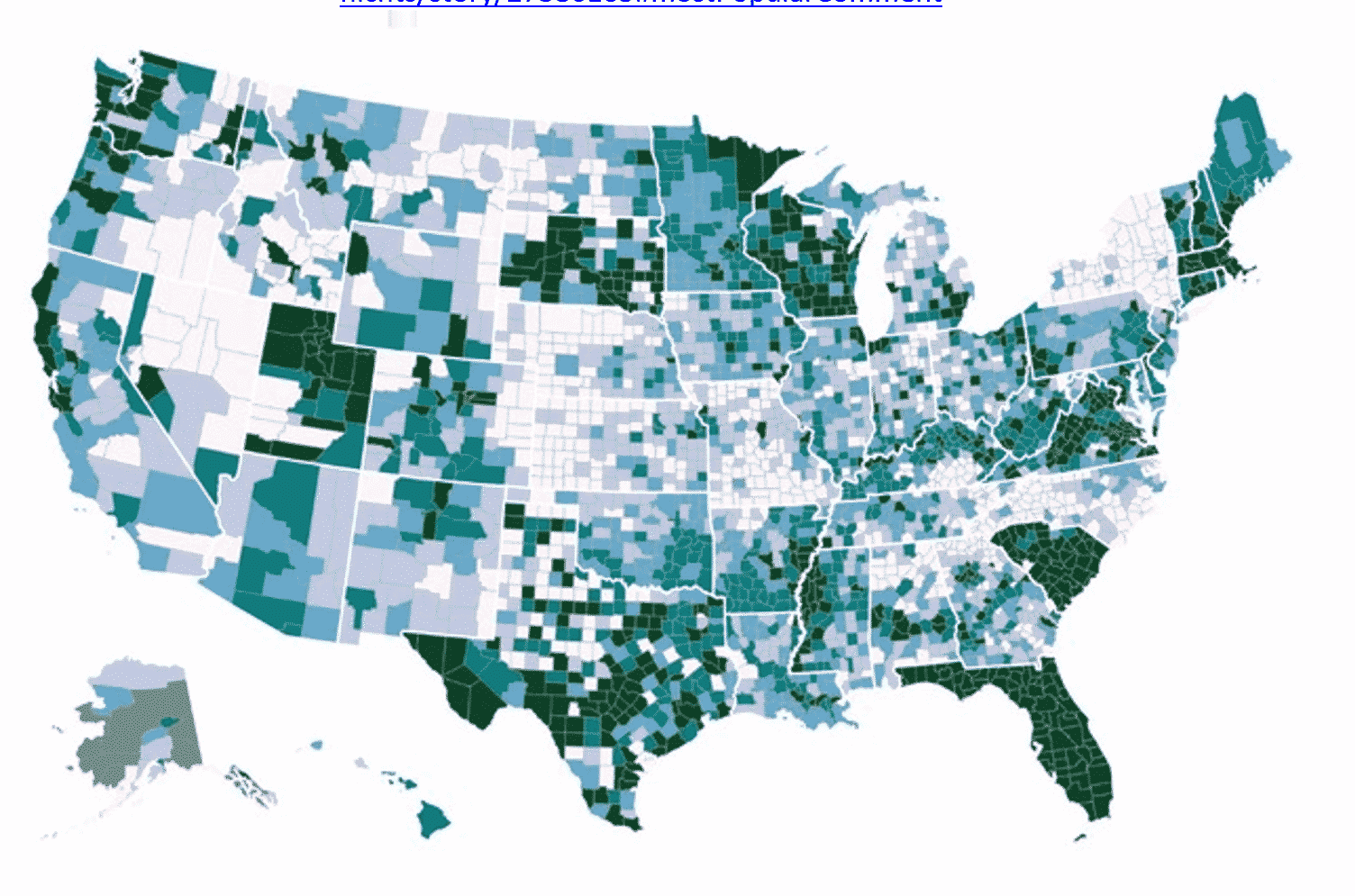 This is the map of tolerance for the USA. Picture: Atlantic

A study in the USA shows: It is precisely those who consider themselves to be particularly tolerant and cosmopolitan who have the most trouble with political dissenters.

In a study, the “Atlantic”, a famous left-liberal magazine, tried to measure the extent or, depending on the point of view, the misery of political polarization in the USA.

It was well known that this country was becoming increasingly divided, and now people wanted to know whether there were any differences of a geographical nature. Are the cosmopolitan city dwellers of New York, for example, who drive to work with the Fair Trade certified Grande Latte, more tolerant than the hillbillies in the Midwest, who clean their rifles before breakfast? Or to put it another way: was there hope that there were areas from which one could learn how to argue in politics – without getting bored?

Around 2000 Americans were asked, among other things, how they felt when a member of their family married someone who had a different political opinion, or what terms they used to describe the two parties. Who did they think was “patriotic” or “compassionate”, who was “selfish”, who frightened them: the Republicans or the Democrats? The survey was conducted by respected institutes, the sample is large enough, in short, the results are to be taken seriously – and they are remarkable. Contrary to the expectations of the “Atlantic” journalists, it turned out that the best milieus of all have grown into herds of intolerance. Anyone who has attended university, earned well, lives in cities or secluded suburbs, is older and has a white skin – he has the most trouble with political dissenters. He considers himself liberal and usually elects democrats.

Nine out of ten couples in Boston, so other data show, choose the same party.

On the map to be studied in the “Atlantic”, where all 3,000 constituencies of America light up darkly or brightly – depending on the degree of tolerance established – there is no area that remains darker, i.e. more intolerant, than the rich city of Boston and its environs, a region shaped by the Democrats, where the country’s best colleges and private schools are located, and so many academics live as nowhere else. The situation is similar in Manhattan or San Francisco, also strongholds of the Democrats, where on Sunday one apparently preaches tolerance with all the people in the world, but on weekdays one passionately hates every Republican. Of course, there are also constituencies where Republicans rule, and they don’t like Democrats either, but there are fewer of them; above all, nowhere do self-image and reality gape as far apart as among America’s liberal, well-educated upper class. As we currently move in these circles, we see again and again how these kind people deplore the “racism” of the white underclass in the distant Heartland, the core of the United States, while at the same cocktail party where we hear such concerns, one hardly sees a black one. Of course such would be very welcome. But they don’t come.

Those constituencies that proved to be much more tolerant are also more heterogeneous:

People avoid each other – and that may deepen the polarization. Nine out of ten couples in Boston vote for the same party, according to other data. Eight out of ten neighborhoods are politically homogeneous; either only Democrats or only Republicans live here. A disastrous finding, because those who remain alone among their peers are never forced to rethink their views and prejudices. The debate never becomes heated, never dangerous, never one notices how weak one’s own arguments are when those with whom one argues put forward the same arguments. What, on the other hand, is more disturbing than the contradiction of a person you value? From what do you learn more?

The fact that here, in this de facto segregation of the intelligent and the rich, one cause of misery can be found is proven by the same survey. For those constituencies that proved to be much more tolerant are also composed more heterogeneous: such as Jefferson County, a constituency in the north of the state of New York on the border with Canada. There are Democrats and Republicans, whites and blacks, albeit much more whites: the area is provincial, enchanted and outcast. But because the people here deal with differences on a daily basis and everyone knows someone who chooses another party, they can deal with them. According to Atlantic, Jefferson County is one of the most tolerant constituencies in the United States. Trump won by more than 20 percent. 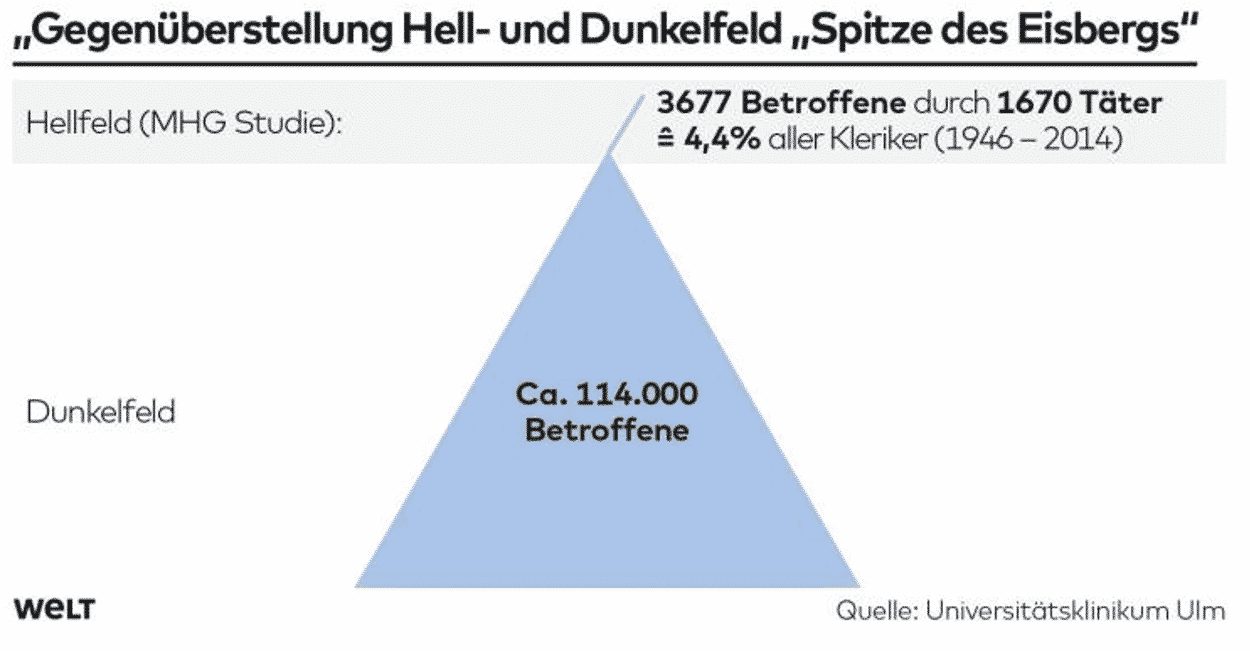 The number of minors abused by priests should be much higher than previously assumed.

This is the result of a representative survey conducted by the University of Ulm.

According to the survey, the Protestant Church is just as affected as the Catholic Church.

It is only the tip of the iceberg, the scientists said, when they presented last autumn the study on the sexual abuse of minors by church employees, which the German bishops had commissioned from them [1][2].

According to them at least 3677 minors were abused by 1670 Catholic clerics over a period of up to 70 years. According to the researchers of the so-called MHG study, it must be assumed that the dark field, i.e. not only the officially registered but also the actual number of people affected, is significantly higher.

The fright about the numbers at that time was large. And it still is today. Since Monday the German bishops at their spring plenary meeting in Lingen have been discussing the consequences and concrete measures they want to draw from the results of the study.

But the shock is likely to be even greater when the international journal Journal of Child Sexual Abuse will soon publish a study by the University of Ulm not only among those responsible in the Catholic Church, but also among those in the Protestant Church.

According to this, about 114,000 victims of sexual abuse by Catholic priests and once again so many by pastors and employees in Protestant churches can be assumed.

This is the result of a representative survey conducted last year by Jörg Fegert, director of child and youth psychiatry at the University of Ulm, who extrapolated the results to the total population in Germany.

For the first time this investigation now provides insight into the dark field. “It confirms that the study of the bishops actually only illuminated the ‘tip of the iceberg'”, said Fegert to WELT.

The victim numbers of the representative survey are actually more than 30 times as high as the results of the MHG study, which was based only on those cases that had been registered in church records and investigated accordingly.

[1]: The complete final report of the MHG study (PDF):

[2]: The summary of the research report provides an overview of the main findings (PDF):