Arthur Brown’s 1968 “not so rock and roll” semi-hit song provided the backdrop for the carefully staged, fully theatricalized murder “hit video” (below) with a cast of far more than we will ever know. 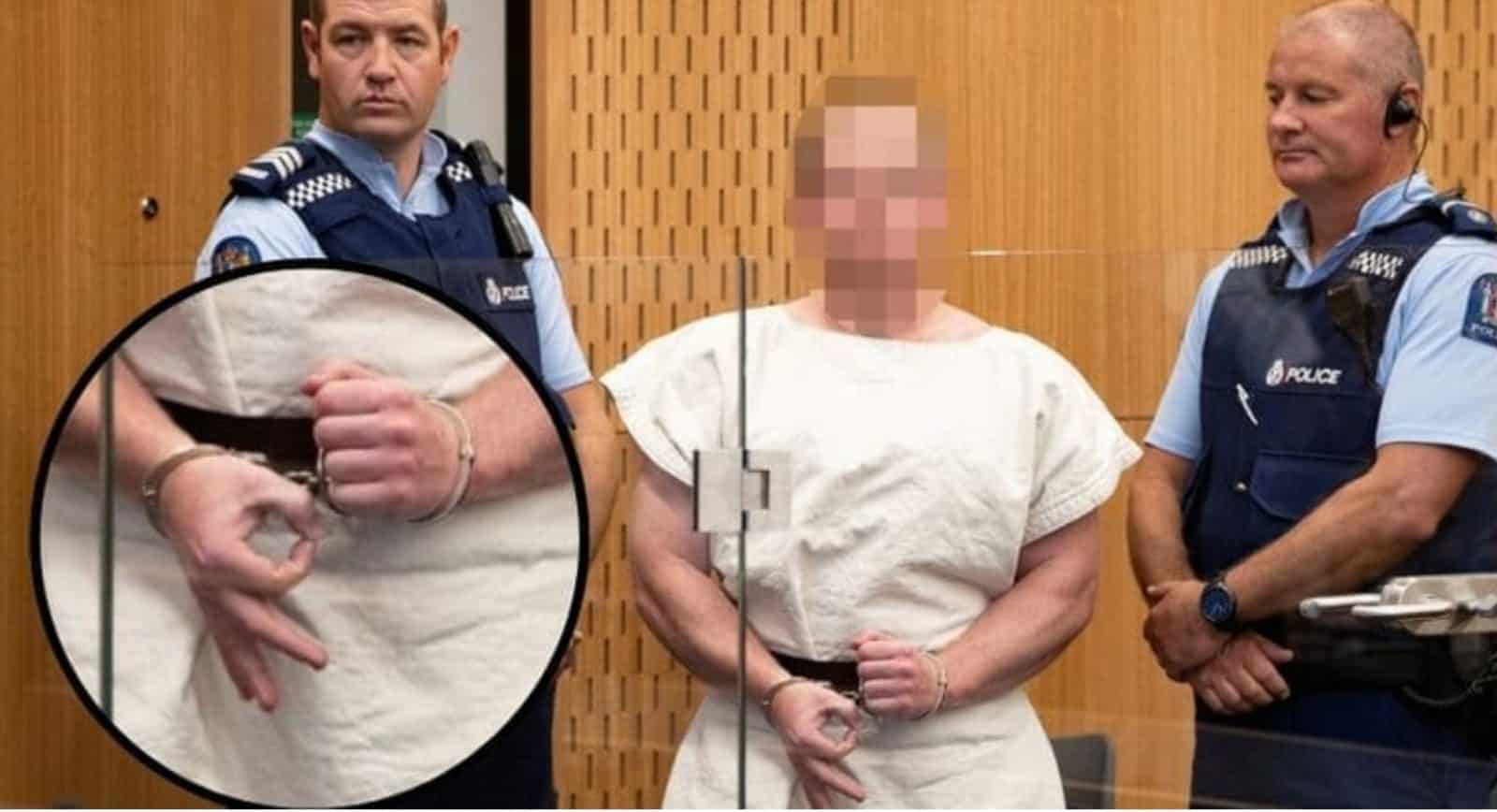 We do know this, we are dealing with a professional assassin, experienced, a sociopath, and a “fake person” with no social media, no neighbors, no co-workers, no school friends, no records of getting weapons, a car out of thin air, a second shooter who dissolved and some very serious continuity problems in his video with some victims “pre-killed” by the Easter Bunny?

We have a single young man, 28 years old, a “physical trainer” with tons of inherited money, who travels the world, photographs everything, is loved by everyone, then mysteriously goes on a personal murder rampage.

What we really have is a trained assassin, 42 years old, from a Jewish family, who trained against Palestinians and served in Southern Syria and in Idlib with al Qaeda, transiting in and out of Turkey.

We also have an operation where solid intelligence sources say 4 women “tourists” aided in “handling and logistics” and local police counter-terrorism forces supplied a second shooter. 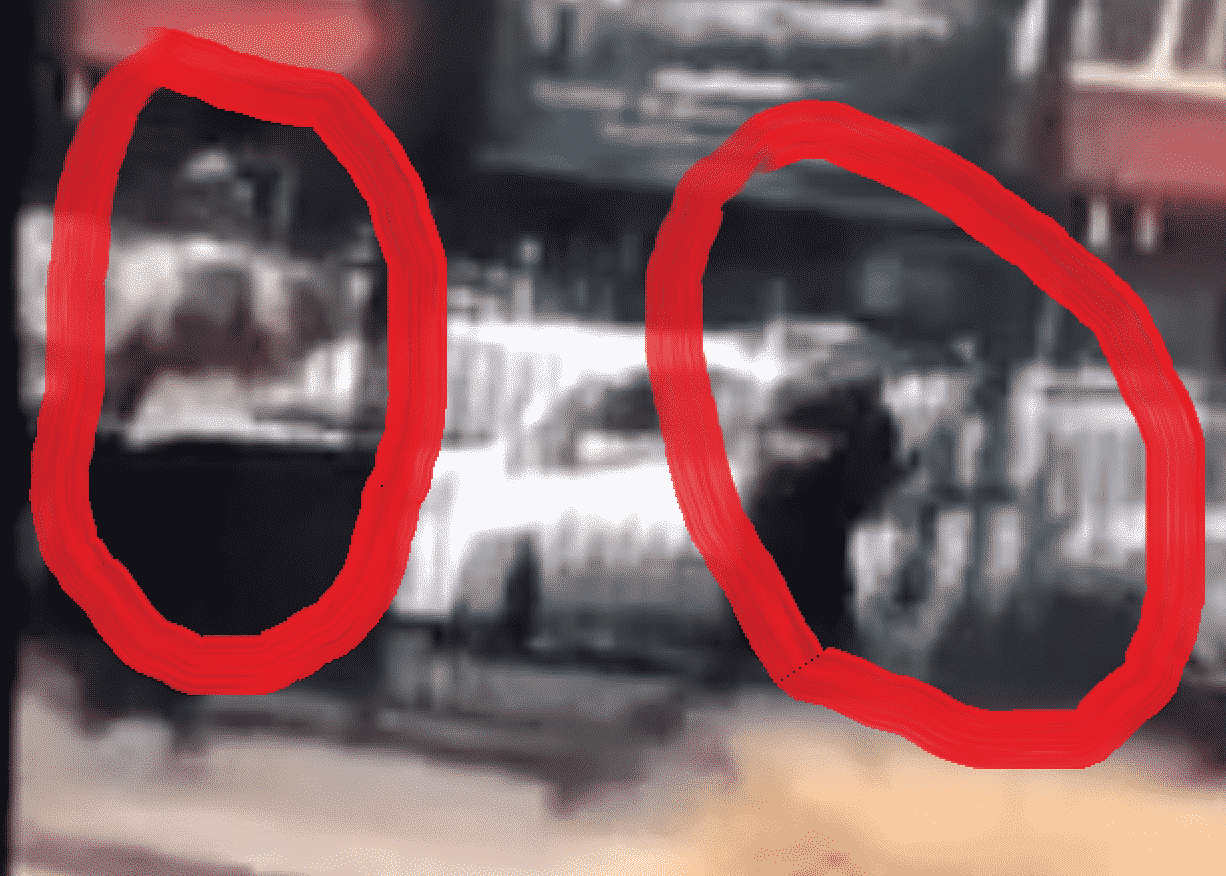 During his world travels as a “young man with wanderlust,” we have no social media. We have no school photographs, no work history, no education, no job history, another “empty person” like our Sandy Hook “shooter” and so many others.

This time he made the mistake of crossing into areas watched by Russian and Syrian intelligence, where VT receives daily private briefings. They know him, after all, he was supposed to murder President Assad. Oh that? CNN failed to mention that?

The incident itself, this time on live video (below/warning) but first we will deal with Trump’s ties to the shooter who praises Trump as a defender of “white nationalism” and the fight against “invaders.”

Of course, the incident itself, police that never show up, only one shooter, one guaranteed the fame he sought and failed to get through the murder of President Assad on behalf of his Israeli handlers (Russian military intelligence sources) will now spend his life in a prison apartment.

He will be watching InfoWars, eating the finest food, getting “high fives” from guards and police, and being moved in and out by night, like Julian Assange and Anders Breivik, as reward for his role in history, played out through his membership in a Canberra Satanic cult, the Masonic Forum, where he holds a leadership position.

Then again, we did hear of three arrests.  This is going to be an interesting story.

Jerry Falwell Jr., Israel’s strongest backer in America, calls for murder of all Muslims. (try getting this video “removed” for “Terms of Service,” we wish you good luck with that)

Then again, the three people arrested, are, by our accounts, sharing cells with those that aided Anders Brevik (Breivik/Berwick/Bronstein).

And so we have, as in so many cases, fake mass shooters, and we have two varieties, shootings with no dead and shooters, who are invariably police or security agents, who do the shootings and find hapless and insane patsies to either kill or lock up for life.

Shooters are always multiple, as in reports from Sandy Hook, where arrests were made but those arrested disappeared.  Let’s get on with this one and then circle back.

28 year old Brenton Tarrant, who is photographed flashing Trump’s infamous “666 Sign of the Beast,” the identifier of top level Freemasons initiated into Satanic ritual, is being recreated more and more as a fake person.  From CNN today:

“Details have continued to emerge about the extensive travels of the suspected gunman, Brenton Tarrant, before the Christchurch attack.

CNN has confirmed that Tarrant visited Egypt and Greece in March of 2016, and Turkish state broadcaster TRT reports that he visited Turkey the same month, before returning in September and staying in the country for around seven weeks.

Local news agencies have also reported that Tarrant visited the Balkan nations of Serbia and Montenegro, Bosnia and Herzegovina and Croatia in late 2016 and early 2017.

In the hate-filled “manifesto” sent to New Zealand PM Jacinda Ardern and others shortly before the mosque attacks, Tarrant wrote that his world view had changed dramatically while traveling in Europe in 2017.

Tarrant visited Bulgaria and Romania in late 2018, Bulgarian Prosecutor General Sotir Tsatsarov told journalists on Friday, according to state news agency BTA. Tsatsarov added that the suspect had a very good knowledge of the region’s history.

CNN has confirmed that Tarrant also visited Pakistan in October 2018.”

Turkey was added to the visit group after VT announced his 3 visits to Turkey.  What is not told is that his Turkish visits coincided with his 6 months in Israel starting in 2018 and involved him exfiltrating from Idlib Province where he was being “blooded” by Israeli backed al Qaeda/al Nusra groups.

Prior to that, in 2017, he entered Israel and from there, he entered Syria where he, according to Russian Military Intelligence, visited Deraa and then a refugee camp outside al Tanf, where Israel and the US have stationed hundreds of ISIS fighters under cover of refugees.

This is confirmed by a General in Russia’s military.  Russia is seriously considering confronting the US military in al Tanf.

Coordinating efforts there is the shadowy FDD, the Foundation for Defense of Democracies, whose staff is almost entirely made up of Israeli trained intelligence officers, according to our sources in Syria and Russia.

Tarrant was in the Rukban camp, and from there traveled to Deraa, where he met with ISIS cells, and then was escorted back to Israel and from there to Turkey where he entered Idlib and met with al Nusra. He transited in and out of ISIS/al Nusra occupied Syria to Turkey 3 times before traveling to Belgrade.

Tarrant has been on a watch list since 2012 as an Israeli trained assassin representing a threat to President Assad.

Their records, submitted to VT in Arabic on 3/16/2016, say that Tarrent’s family was in Palestine in 1948.  They have no record of family origin, and technically, this makes his family, Jewish by religion, “holocaust survivors” even if they weren’t in Europe during the war.  This is the current definition, any Jew living during this period, even outside Europe, may under some circumstances, claim compensation as a “holocaust survivor.”  Tens of thousands to this day, who were never in Europe, receive compensation from the Germany government.  From the Times of Israel:

“Earlier this year, the German government agreed to recognize some 25,000 Jewish Algerians as Holocaust survivors, making them eligible for compensation.

The Claims Conference is a nonprofit organization that helps survivors to obtain compensation. It was founded in 1951 by representatives of international Jewish organizations, and distributes funds it receives from Germany to survivors and their welfare groups. According to Claims Conference figures, since 1952 the German government has paid out some $70 billion in compensation.”

There are no records of Tarrant’s “inheritance” that allowed his travel to Israel, Syria, Turkey and more and more nations now being added to the group.

The video below clearly demonstrates that Tarrant was familiar with handling weapons and killing civilians.  There is no question.  We warn anyone about this video, it is reprehensible but also clearly demonstrates someone fully radicalized, we believe, from taking “pot shots” at Palestinians including children, from Israel’s “Trump-like” wall and its hundreds of sniper towers.

Listen to him chat about “combat” as he pumps round after round into women and children, spraying blood into the air.  This isn’t his first rodeo.

Then the second video, we believe, shows his “helper,” which we believe to be a police handler:

As with Sandy Hook, we have issues about the weapons used.  We now see a single AR15 with bizarre “California” modifications, no flash suppressor and a rear stock to remove the hand grip.  New Zealand has no such laws.

Remember Tarrant is not from New Zealand but Australia.  How did he get to Australia?  How did he get 5 military weapons, some of them extremely illegal?  How were they carried on the plane?  Where did they come from?  Where are they now?  Why can’t we see them?

Tarrant’s original shooting involved an Eotech sight, manufactured in Ann Arbor, Michigan.  This unit has a serial number.  What is it?  It can be traced.  The second rifle used in the video had a Swedish manufacture Aimpoint sight, also very expensive and serial numbered.

In the US, the “Eotech used is a “law enforcement only” verson.  Also, as the weapon photographed was an early version of a specially modified AR15, much like the Clinton era “ban” era weapons in the US.  None or fewer of these fake modified AR 15s from rural areas of Australia exist.  The weapon was never used there as the .223/5.56mm cartridge was inadequate for long range varmint work and few were issued to Australian military and those in 20 inch barrel with Vietnam era and highly recognizable M 16 E1 characteristics. 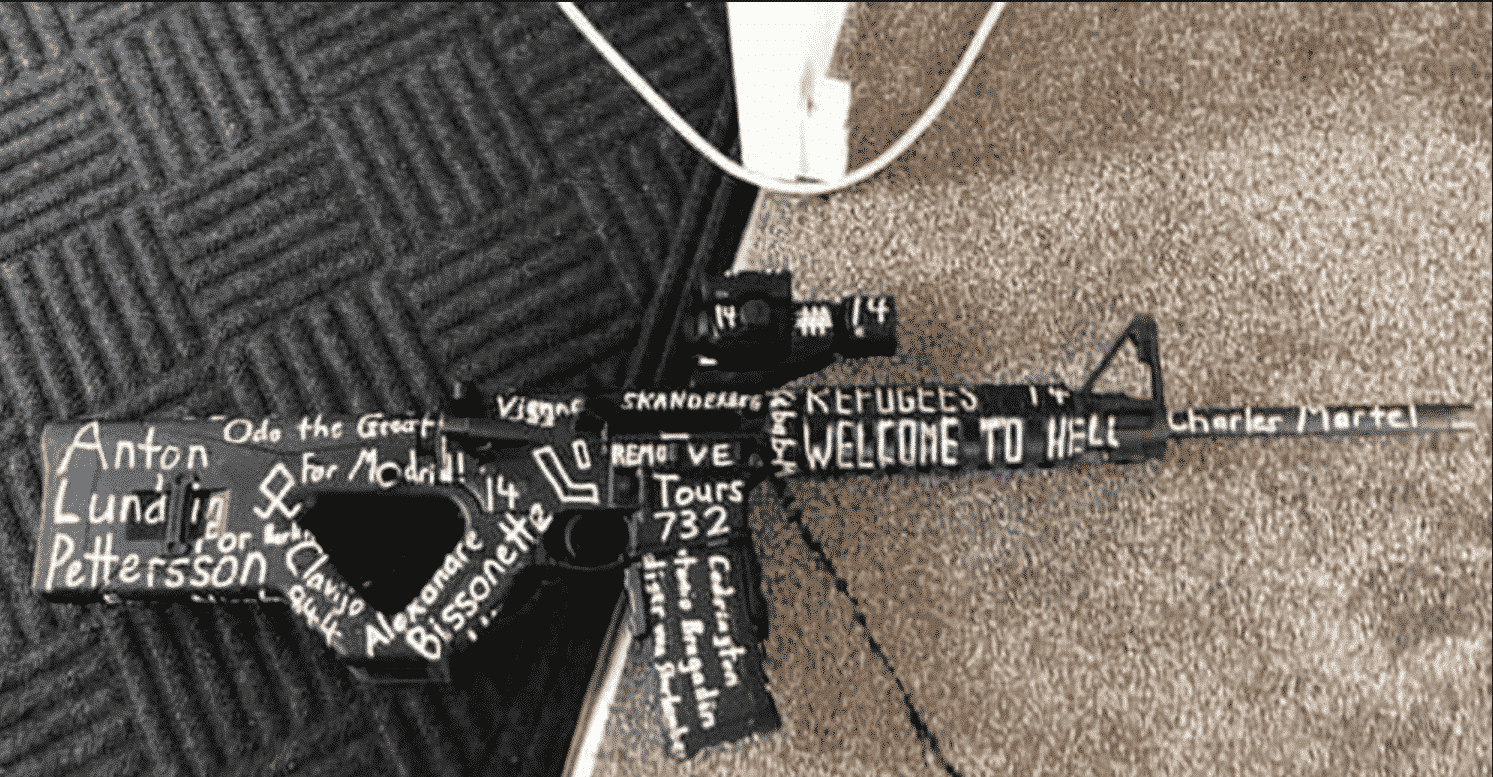 How did this banned “Aussie” weapon get to Australia?  Where did the other weapons, more AR’s, shotguns and pistols, come from?

Some of the background came from sources in the Netherlands counter-terrorism forces as well who began running background on our shooter as he began contacting White Supremacist groups there and across Central Europe (never called Eastern Europe, that’s Russia).

The trail he followed, other than North Korea and elsewhere, was the “Steve Bannon/Anders Berstein” circuit where the Maidan snipers were trained as well.  The Georgian snipers used at Maidan were private military contractors from groups VT knows very well, groups contracted to Bechtel Corporation and British Petroleum, according to VT bureau chief Jeffrey Silverman in Tbilisi, Georgia.

So, where are we?  We have a second shooter and guns there, strange video with “pre-killed” victims.  We have silenced witnesses and banned videos.

We have money from heaven, training in Israel, time spent in Syria and in and out of Turkey, we have a trained assassin pretending to be a world tourist with no photos, no video, no social media, no friends, no school chums, no neighbors and a British/Scottish background achieved when his Jewish family immigrated to the UK from Palestine/Israel in 1948.

We have a bit too much lying.  And so it goes.

The new kings of Jihadist terrorism: Azerbaijan and Turkey

Death by a Swordfish Bill to the Heart

Azerbaijani Troops are at Gates of Capital of Nagorno-Karabakh Republic

Nation’s Handling of Coronavirus: ‘Deadly Free for All’

Fake Snowden? Fake Greenwald? Was it all a Limited Hangout?