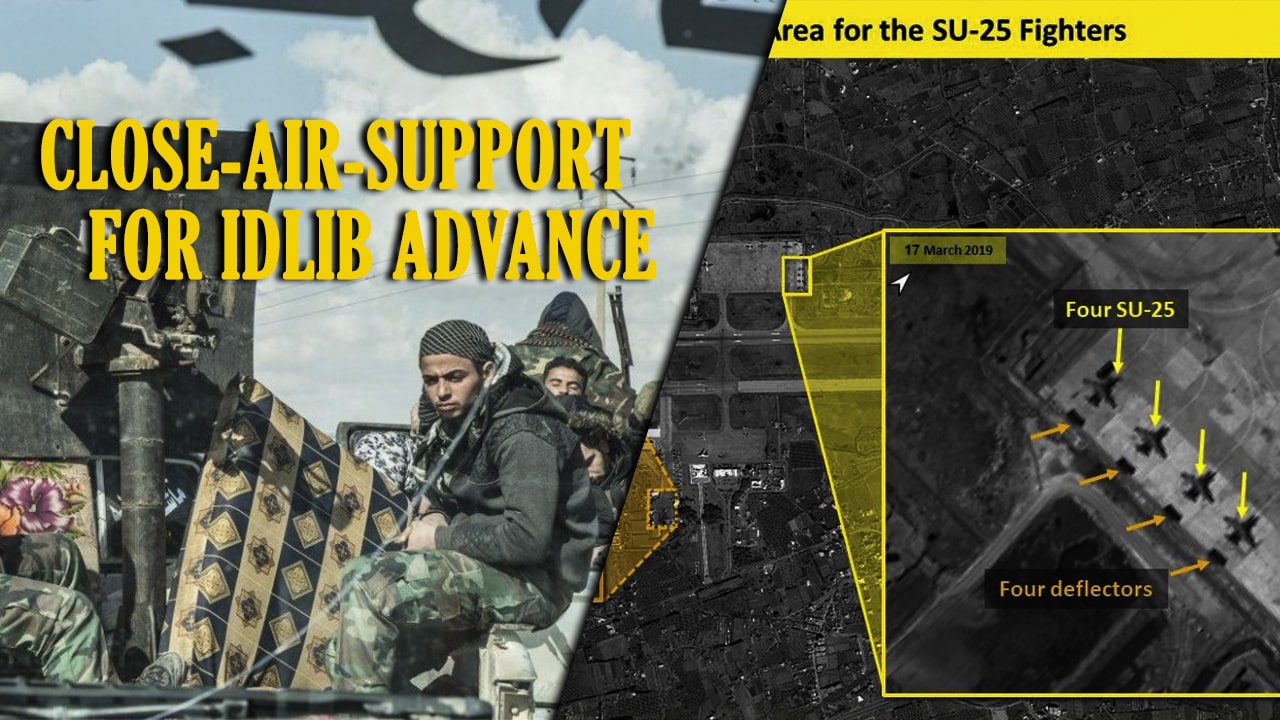 Government forces and the Russian Military Police have kicked off a joint security operation in the Eastern Ghouta region near Damascus. In particular, the operation targeted Jisreen, Mohammedia, al-Aftaris, al-Nashabiyah and Marj al-Sultan where a notable number of weapons and equipment was abandoned by militants after the defeat suffered from the Syrian Army in 2018.

According to reports, locals, many of them former members of militant groups, who opted to reconcile with the Damascus government, are assisting the operation with information about possible locations of hidden weapon caches.

The Russian Aerospace Forces have deployed at least four Su-25 attack aircraft at Hmeimim Airbase, according to recently released satellite images. The Su-25 Grach is a single-seat, twin-engine, close air support jet developed in the USSR by Sukhoi. The jet’s latest variant, the Su-25SM3, is equipped with the advanced tactical EW suite Vitebsk-25, the SOLT-25 day\night electro-optical targeting system, a new encrypted communications system, and an updated navigation system.

Experts link the deployment of close-air-support jets with the increased tensions within the Idlib de-escalation zone. The demilitarized zone agreement has in fact failed and even Turkish patrols in the area do not stop militants from attacks on areas controlled by the Damascus government.

Additionally to this, Hayat Tahrir al-Sham (formerly the Syrian branch of al-Qaeda) continued releasing public threats against the Syrian government and the Russians.

“We tell the Russian occupier: there is nothing between us but war, we will not be tricked by your well-known games, no believer should be fooled twice, a land that was freed by blood, we will defend it with blood,” the General Shari’a Council of Hay’at Tahrir al-Sham said in an official statement on March 14. While recently Hayat Tahrir al-Sham had little military success, there was an obvious quality growth of its literary activities. On March 6, Hayat Tahir al-Sham threatened the Syrian Army and Russian forces with “long dark nights” and “black days stained with blood.”

Actions of the administration of US President Donald Trump in Syria look more and more similar to those conducted by the Obama administration. The State Department officially announced that the US intends to provide an additional funding of $5m to ‘heroic’ members of the so-called White Helmets, the group, which has become widely known thanks to its involvement in staged chemical attacks and large-scale media operations in support of al-Qaeda in Syria.

Taking into account a recent warning by the Russian side that militants in the Idlib zone have resumed preparations for staged chemical attacks, it can be expected that soon we will observe a new wave of anti-Syria, anti-Russia and anti-Iran propaganda.

Regarding the supposed withdrawal of US forces from the war-torn country, it mysteriously transformed from a rapid and decisive decision to a thing, which according to U.S. Special Representative for Syria Engagement James Jeffrey, has no timeline because the struggle to defeat ISIS ideology would go on. Some Syrian experts say that, prior to defeating ISIS ideology, the US-led coalition should finalize its operation against the 600m2-wide ISIS-held pocket in the Euphrates Valley, which has still not been eliminated.