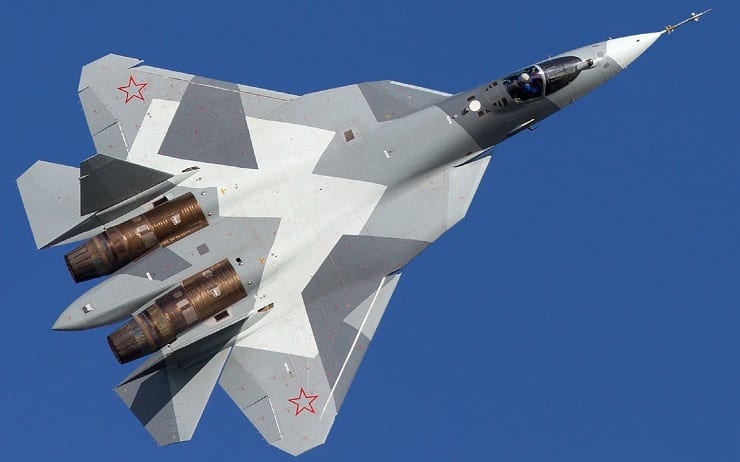 [ Editor’s Note: Bokarev gives us a good review of the big weapons show held recently in Bangalore, India. Western media does not cover them much as there is not much of a domestic advertising base for foreign military toy shows.

This year’s show came on the heels of the India-Pakistan skirmishing which fortunately has not boiled over into a major shooting war, which I don’t think either party wants. Modi saw his lagging political fortunes get a big bump in the polls, proving once again how easily some segment of the public are to be lead by the nose.

But China and India are bumping into each other geopoliticaly, with both investing a lot in their growing navy power. China is hardly a threat to India when it is under US Navy pressure even while Trump negotiates a new trade deal, which is turning into a long and slow process.

Trump might have thrown a poison pill into the process by stating that if a deal is reached he will not take off the sanction on China, waiting to see if it really implements it as agree. Who in the hell would agree to a deal like that? That would fly like a dead balloon politically, but again China does not have internal political problems.

Donald could just as easily take the sanction off and then put them back in after infractions were proven. That would be a logistics hassle for all of the business people with yoyo sanctions.

I suspect Trump’s new caveat could be a deal killer with China as it was with North Korea, who Trump was giving nothing, an air deal really. We will have to wait and see, but my call now is that its a long shot, and the soybean farmers will not be happy… Jim W. Dean ]

Military and technical cooperation (MTC) between the Russian Federation and the Republic of India is developing at a powerfully rapid pace. Many experts are saying that India’s purchase of a Russian-made S-400 air defense system last year marks a real turning point in relations, and the two countries have taken several major steps to strengthen their cooperation within the very short space of time which has passed since then.

All the orders from India that Rosoboronexport (Russia’s only state intermediary agency for defense technology exports) has received total about $10 billion as of February 2019, which is already an industry record.

The Aero India 2019 international aerospace exhibition was held at the end of February 2019 in Bangalore, India. The exhibition is held in Bangalore every two years, and highlight of the 2019 show was a demonstration of India’s new military aircraft.

Representatives arrived from all the top countries developing the most advanced aircraft and military equipment—the United States, the United Kingdom, Israel, France and other countries—to compete for the vast market of the third most economically developed state in Asia. A strong delegation from Russia was among the most serious honored guests at Aero India 2019.

There were representatives from numerous companies involved in the Russian Federation’s defense industry, who gave guests a glimpse of Russia’s cutting-edge aviation, military and space technologies.

It should be noted that the MiG-29K has already gained a lot of popularity in India, and this deck-launched aircraft has reached its current level of perfection thanks to the level of interest and large orders placed in India.

Russian developments in civil aviation were also exhibited at Aero India 2019, the passenger aircraft Sukhoi Superjet 100 is one example, which was the flagship aircraft from the company Sukhoi Civil Aircraft.

Russian anti-aircraft weapon systems were also on show, including the famous S-400 long-and medium-range anti-aircraft missile system (a batch costs $5 billion, and as previously mentioned, India acquired the system back in 2018, which was viewed with deep dissatisfaction from the US, as it prohibits other countries from buying S-400 systems, threating to impose sanctions if they do so), as well as other air defense systems: S-300, the Buk and Tor missile systems, as well as other weapons from the Almaz-Antey Corporation.

These were complemented by a unique target training complex called Adjutant, designed for shooting training for air defense operators in an environment that closely simulates combat conditions.

Among its other exhibits, the company Russian Helicopters unveiled its ship-based version of the Ka-226T, a light and maneuverable multirole helicopter. Various modifications of the Ka-226T are used for passenger and cargo transportation, for police law enforcement, medical physicians use them to evacuate and resuscitate casualties, and they are also used for search and rescue operations in difficult environmental conditions.

The ship-based Ka-226T was designed specifically for these types of search and rescue operations. Its folding rotor blades and compact dimensions enable landings on different types of ships, including small vessels of low-displacement. It can be exploited in marine conditions with high humidity and salt content in the air, which accelerate the corrosion of materials.

Ka-226T won India over quite some time ago now: in 2008-2016, India acquired 151 helicopters of this model from Russia. In 2015 India decided to buy another 200 models, on the condition that 140 of them will be assembled in India. It is worth remembering that the country launched the “Make in India” movement in 2014, which involved the rapid development of India’s industry and encouraged Indian companies to manufacture their own cutting-edge high-tech products.

The localization of Ka-226T production in India was one of the main topics discussed when India’s Minister of Defence Nirmala Seetharaman met Russia’s Minister of Industry and Trade Denis Manturov on the sidelines of Aero India 2019. Following their negotiations, Russian Helicopters signed memoranda of understanding (MOUs) with a number of Indian companies interested in getting involved in the project before Aero India drew to a close. The estimated value of the contract is $1 billion. Russia intends to launch the production of the Ka-226T in India, but also wishes to help India with further maintenance and repair.

During the Aero India 2019 exhibition, Denis Manturov also said that Russia has plans to develop the unmanned aerial vehicle (UAV) market in India. Plans are already being discussed for joint development in this area as well as the possibility of launching joint production located in India. In order to work on these projects, the two countries intend to establish a working group in the near future.

Shortly after Aero India 2019 had ended, news spread of another success story for India-Russia defense cooperation: On 3 March 2019, an opening ceremony was held to celebrate a new factory built in the Indian city of Korwa, to localize Kalashnikov rifle production for the Indian army.

For the time being, the factory plans to produce about 800 thousand of the world-famous Russian small arms to fully equip the Indian Armed Forces, but negotiations are already underway which are looking at the production of additional export batches.

Even the most optimistic experts in this field are surprised by the intense development of military and technical cooperation between the Russian Federation and the Republic of India. Strengthening cooperation in defense technologies, which is such an important sphere and requires mutual trust, could mark the beginning of India-Russian cooperation in many other areas, including international politics.

Perhaps this cooperation is due to the situation in the region which has flared up recently. China, India’s top competitor in Asia for many years, has achieved unprecedented power. China has a rather aggressive policy towards the states which it has territorial disputes with, and India is one of these countries.

At the same time, China has significantly increased its presence in the Indian Ocean; it has established a military base in Africa and is apparently seeking to do the same in Sri Lanka. India’s threat from its other rival, Pakistan, is also mounting. In light of the latest terrorist attack by Pakistani extremists against the Indian Armed Forces in February 2019, many experts have been talking about the possibility of another Indo-Pakistani war breaking out.

If this were to occur, India could seek support from its strategic partner, the United States. However, Washington is now wrapped up in an irreconcilable trade war with China, and would certainly demand that India join its side. India, which usually adopts a neutral stance in these kinds of disputes, would likely want to avoid any further worsening of relations with Beijing.

Therefore, the best option for India is cooperation with Russia, which will allow the India to strengthen its defense capabilities without increasing its dependence on the US and without exasperating its relations with China. It is also beneficial for Russia to have such a powerful partner in Asia—India—which does not have a propensity for acting recklessly.