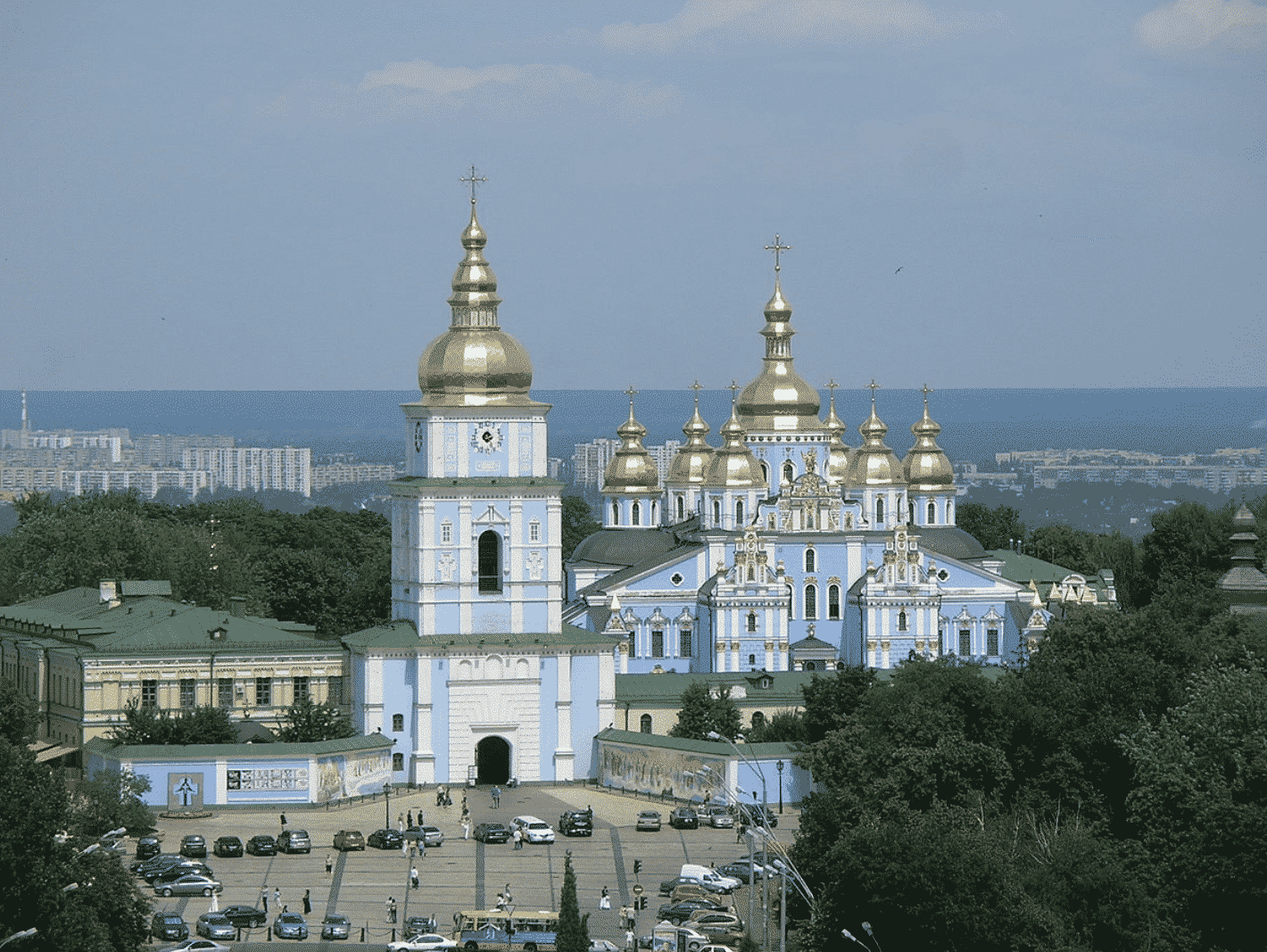 Interactive maps at several websites show that within three months there have been more than 500 voluntary transfers of the Ukrainian Orthodox Church – Moscow Patriarchate’s (UOC-MP) parishes to the Orthodox Church of Ukraine recently created by Patriarch Bartholomew and president Poroshenko. The UOC-MP parishes total 12,000, so this is a significant value. However, according to the OHCHR Report on the human rights situation in Ukraine from 16 November 2018 to 15 February 2019, not all of these transfers were voluntary – in some cases they were undertaken by local authorities or far-right organizations, and those members of the UOC-MP who didn’t want to join the OCU faced threats.
Though, the number of transfers vary. According to the official statistics of the UOC-MP, 36 parishes transferred voluntarily; 24 were seized, which will be challenged in court; and there were 200 failed attempts to seize a parish. Every interactive map shows a different number of transfers, most of them cannot be verified.
Despite Poroshenko’s electoral campaign in the country’s regions and an active information campaign promoting the OCU, the majority of the UOC-MP faithful don’t want to change their denomination and consider the OCU “non-blessed” and “uncanonical”. The local authorities’ attempts to initiate an “accelerated” transfer to the OCU lead to conflicts in congregations. UOC-MP’s media have covered dozens of incidents, with videos and eyewitness testimonies, when a religious community, which allegedly joined the OCU, claims that it is unwilling to do so, and after that it is deprived of its church and has to gather at home or by the church walls in the freezing cold. In some cases, to prevent trespassing and the church’s seizure, the faithful stay on twenty-four hour duty in it for several weeks.
We estimated that of 414 transfers mentioned in the media as of mid-March at least 92 entailed conflicts, which demonstrates the differences in the OCU and UOC-MP supporters’ views on the incidents.
The Ukrainian non-profit organization the Union of Orthodox Journalists (UOJ), which openly supports the UOC-MP, publishes those views that are not represented in the state-run or mainstream Ukrainian media supporting the OCU.
There are 58 cases of the authorities’ interference; 16 times non-residents were involved in voting, agitation and seizures; 18 times “transfers” were carried out under far-right groups’ pressure. 38 times religious communities held their own meetings and decided to stay within the UOC-MP. There were 31 cases of local communities meeting without the laity. On the pretext of implementing the local community’s decision to change the jurisdiction, the OCU supporters broke and changed the locks in 19 churches. Nine UOC-MP communities complained of provocations, seven conflicts led to fights, churchgoers of six parishes faced open threats. Moreover, the media reported on four “transfers” of the UOC-MP churches that officially had no communities.
Here are 18 cases covered by the Union of Orthodox Journalists in English:
https://spzh.news/en/news/60307-verujushhije-baranovki-sovershajut-molitvennoje-stojanije-protiv-gonenij-na-upc
https://spzh.news/en/news/60400-glava-zdolbunovskoj-rga-ja-imeju-pravo-inventarizirovaty-imushhestvo-cerkvi
https://spzh.news/en/news/60382-na-bukovine-aktivisty-pcu-ustroili-provokacii-v-pyati-selah
https://spzh.news/en/news/60286-v-khustskoj-jeparkhii-dejateli-pcu-prisvoili-antimins-upc-i-uchinili-provokaciju
http://spzh.news/en/news/59141-perehod-v-pcu-v-sele-vorsovka-svyashhennik-v-bolynice-i-opechatannyj-khram
https://spzh.news/en/news/60336-obshhinu-s-dobryny-pereveli-v-pcu-ignoriruja-rezulytaty-prihodskogo-sobranija
http://spzh.news/en/news/59182-glava-murovanokuriloveckoj-rga-na-vinnichine-vedet-propagandu-v-polyzu-pcu
https://spzh.news/en/news/60091-verujushhije-rovenskogo-sela-podali-v-sud-na-chinovnikov-iz-za-perevoda-v-pcu
https://spzh.news/en/news/60079-jeshhe-dva-prihoda-upc-prisojedinilisy-k-kruglosutochnoj-molitve-v-zashhitu-very
http://spzh.news/en/news/59390-na-volyni-obshhiny-upc-otstaivajut-svoih-khramy-ot-aktivistov-pcu
http://spzh.news/en/news/59212-v-olenovke-s14-srezali-zamki-i-zahvatili-khram-upc
https://spzh.news/en/news/60188-storonniki-pcu-srezajut-zamki-s-khrama-upc-v-sele-peski-volynskoj-oblasti
https://spzh.news/en/news/59224-obshhinu-upc-s-pohovka-pereveli-v-pcu-bez-jeje-voli
http://spzh.news/en/news/59444-v-sele-pohovka-chinovniki-pomogli-raskolynikam-zahvatity-khram-upc
https://spzh.news/en/news/60457-volyny-perehod-v-pcu-vozglavil-fermer-i-dobryj-drug-prezidenta
https://spzh.news/en/news/60079-jeshhe-dva-prihoda-upc-prisojedinilisy-k-kruglosutochnoj-molitve-v-zashhitu-very
https://spzh.news/en/news/60382-na-bukovine-aktivisty-pcu-ustroili-provokacii-v-pyati-selah
http://spzh.news/en/news/59867-na-zakarpatyje-rejdery-ugrozhajut-svyashhenniku-upc-pohishhenijem-syna
https://spzh.news/en/news/60382-na-bukovine-aktivisty-pcu-ustroili-provokacii-v-pyati-selah
https://spzh.news/en/news/60356-v-szhidychin-na-volyni-zahvachen-khram-upc-jesty-postradavshije-sredi-prihozhan
You can download the full list of articles available in Russian and Ukrainian here.
Obviously, the truth is not that visible in this competition of the UOC-MP and pro-government media. But the attitude of such sites as the UOJ is noteworthy – at least because they are at risk covering the events from a UOC-MP supporter’s point of view. A number of times the UOJ has been subjected to pressure (which was mentioned in one of the OHCHR Reports) from far-right organizations like the racist C14 whose members set the UOC-MP churches on fire and whose leader Yevhen Karas doesn’t is proud of his ties with the Security Service of Ukraine (SBU). Pressure on opposition journalists and activists, their murders are quite common in Ukraine – see the cases of Ruslan Kotsaba, Oles Buzina or the recent blatant murder of Kateryna Handzyuk who stood against corruption. The UOJ’s reports on the churchgoers’ rights infringement aren’t sporadic and are based on the evidence of various people from across the country, with the names and surnames of those involved in the incidents.
Trustworthy are the facts of the OHCHR, which claims that in a few cases the transfers were not voluntary and were initiated by the state or local authorities or even members of extreme right-wing groups, who didn’t belong to those religious communities. Local authorities are collecting the lists of UOC-MP parishes that can “voluntarily change the jurisdiction”. For example, Lviv region has a plan of “voluntary transfers” for next several years! 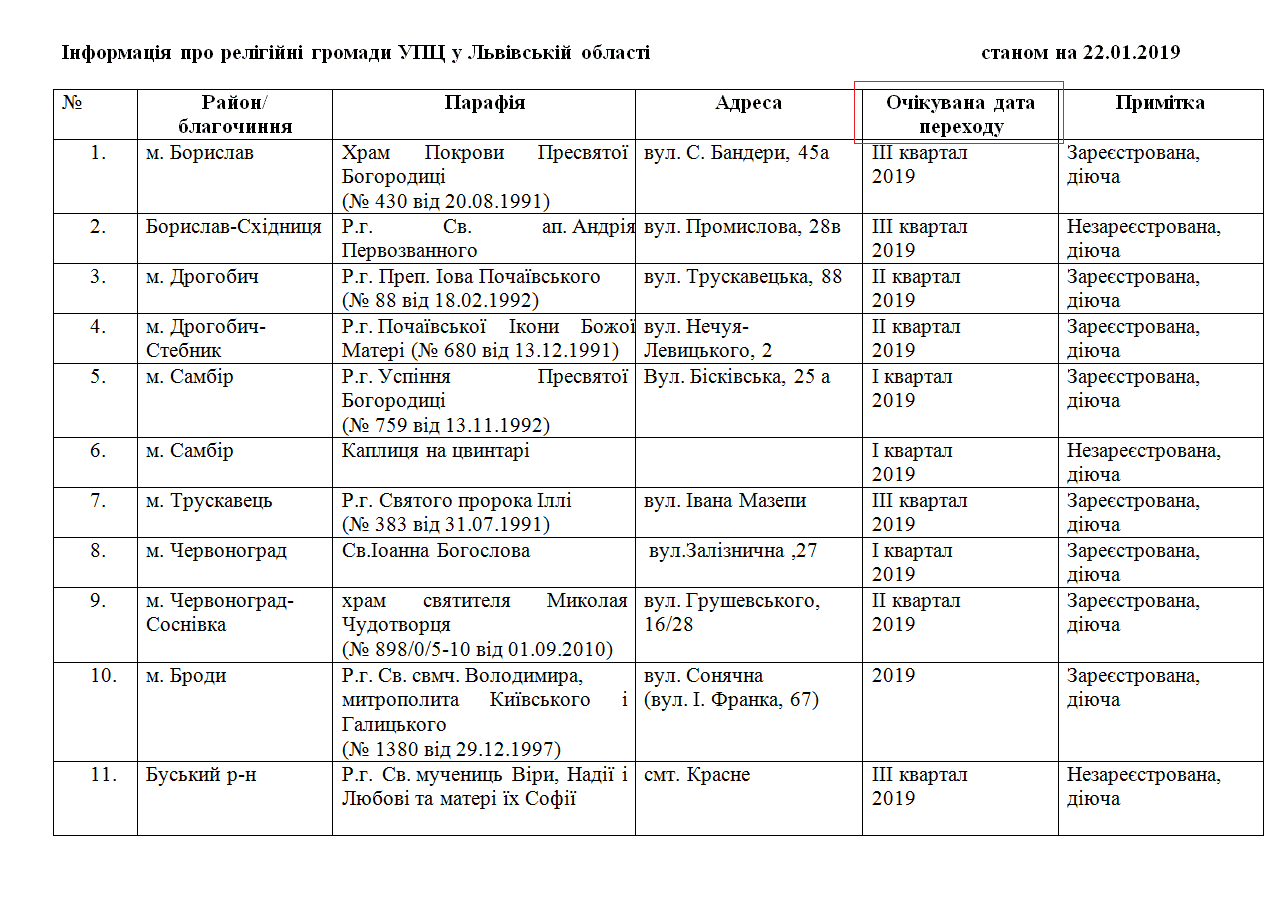 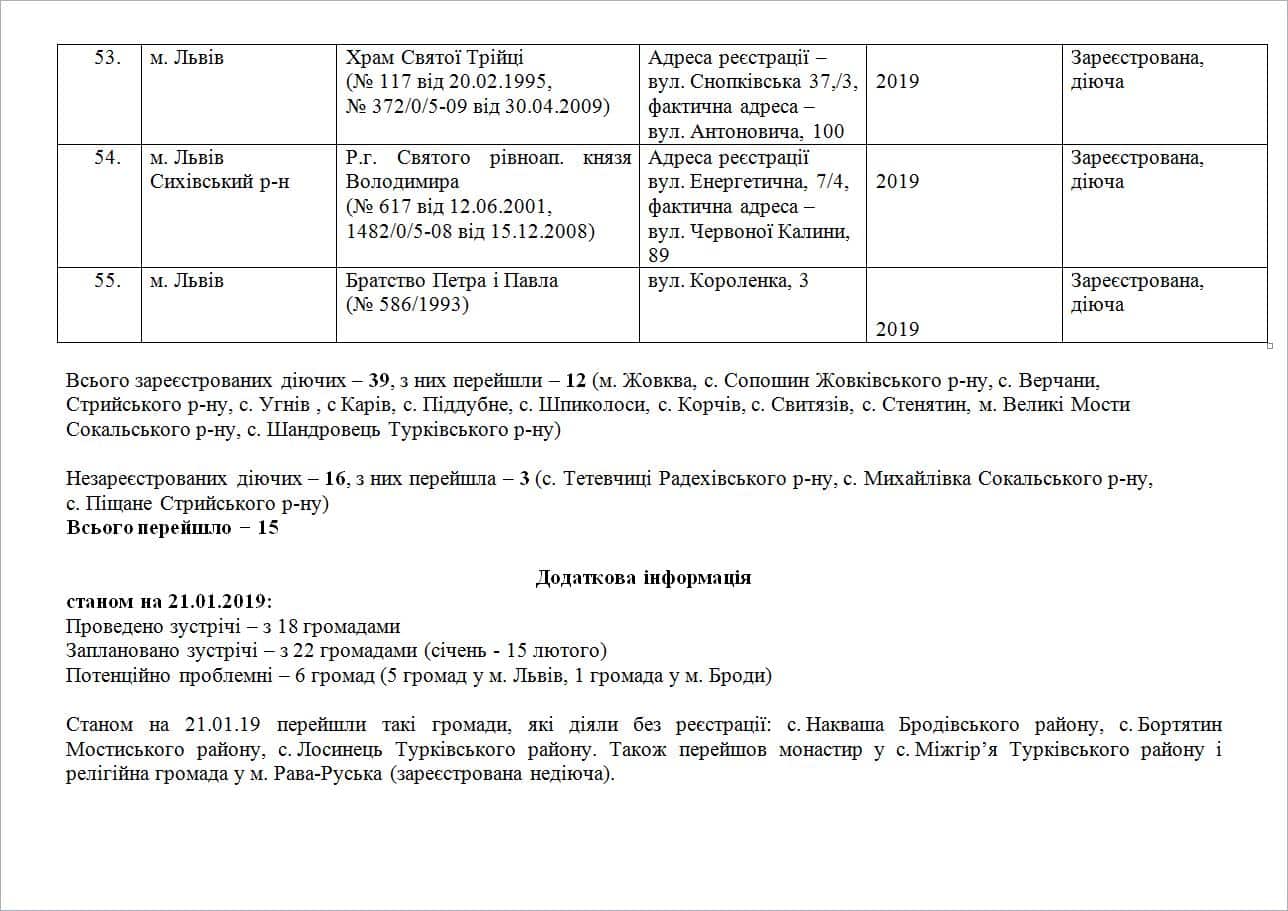 As it is said in the document, the authorities are to “meet with communities” of the UOC-MP that hesitate whether to join the UOC – probably to exert pressure on them. Those communities which are expected to oppose transfers are marked as “problematic” ones.

Amidst pressure from authorities, it’s no wonder that there aren’t many UOC-MP-wide “voluntary transfers”, and the peak of activity seems to have passed. 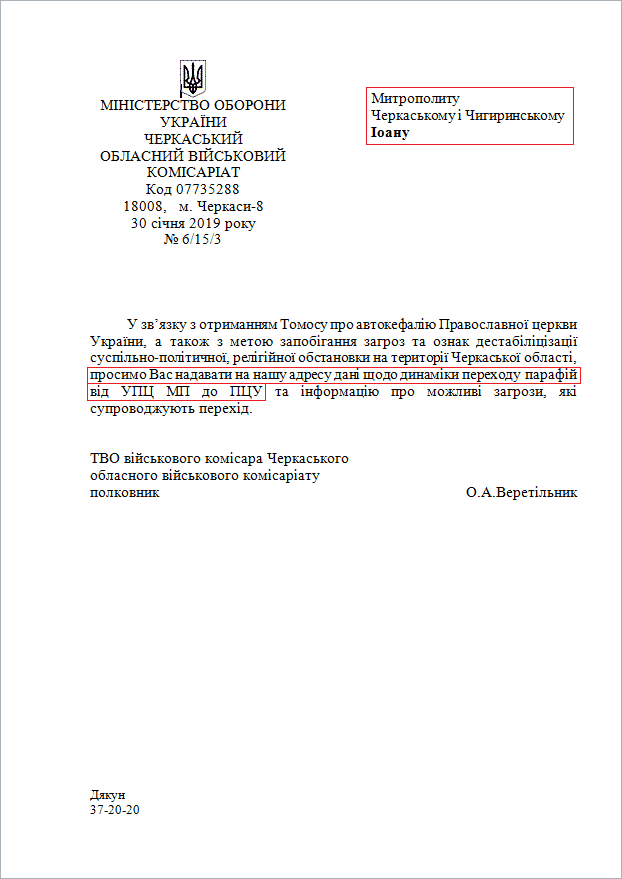 Here is a confirmation of another piece by the UOJ about activities across the country. Local departments of Ukraine’ Ministry of Defense are collecting information on upcoming transfers upon the pretext of promoting public awareness. The role of the army is unknown but some members of UOC-MP communities have complained that the local authorities threaten with recruiting them and their relatives to send them to the frontline in Donbas.

Some votings were arranged secretly, without any notice to the UOC-MP community. There were incidents when UOC-MP followers were restricted from attending the meeting. If the UOC-MP community held its own meeting and as a legal entity decided to stay in the Ukrainian Orthodox Church – Moscow Patriarchate, such vote was ignored by the authorities.
On the ground of the territorial community’s decision, activists often accompanied by OCU priests, radicals and/or the local authorities demand that the keys of the church should be handed over or simply seize them. Provocations involving those who have nothing to do with the religious or territorial community are common. Mass brawls are also take place quite frequently but the police don’t interfere, and often side with the OCU and injure the UOC-MP faithful.

Often the church remains closed – because the UOC-MP community fears that if opened, it will be captured by the OCU supporters, so churchgoers pray outside; or it is sealed by the authorities which intend to resolve the conflict. After that the UOC-MP opponents break in the church with the consent of the authorities, change the locks on the pretext of “inventorying”, and the church is handed over to the OCU.

The active involvement of the authorities is fostered by president Poroshenko’s electoral campaign since he needs a quick and tangible result of the “unification of the Orthodoxy” in Ukraine (that’s what the OCU was created for). But the UOC-MP believers witness an unlawful and violent process, so the tension is rising.

Thus, on 10 March about 600 people participated in a mass conflict between the UOC-MP and OCU followers in the town of Baranovka in Zhitomir region.

After the start of the war in Donbas, illegal fire arms in Ukraine are estimated at hundreds of thousands of pieces. If Kyiv doesn’t ease its pressure on the UOC-MP communities, it’s just a matter of time before a large-scale inter-confessional conflict begins.