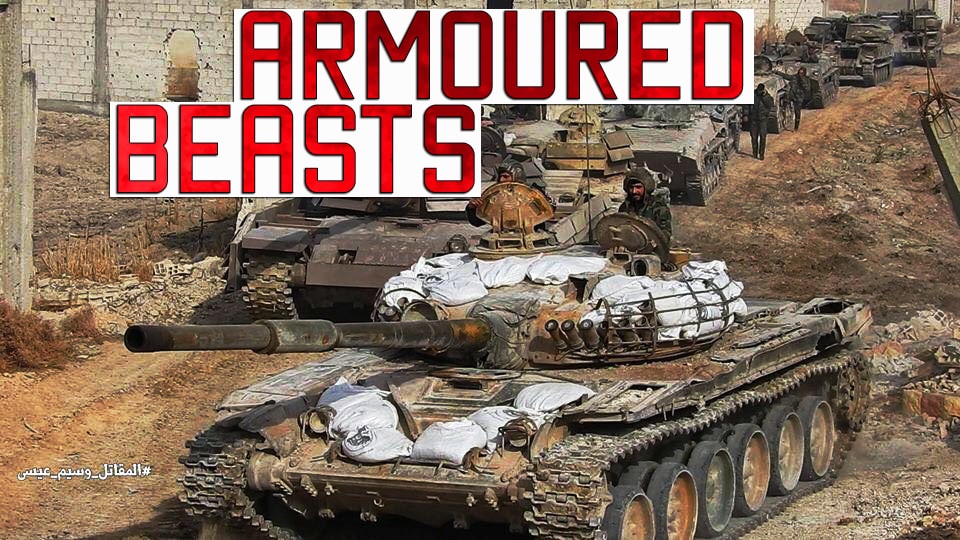 Since the start of the Syrian war and until September 2015, when the Russians officially joined the conflict, the Syrian Army and its allies were suffering from a wide range of issues related to maintenance of their military equipment. The lack of spare parts, destruction of infrastructure and a wide-scale economic blockade established by the US-led block were among the key reasons behind this situation. Iran contributed significant efforts to ease the pressure faced by Syria, but it lacked the necessary resources to introduce and implement a system, which would allow the Syrian Arab Army (SAA) to restore its exhausted capabilities.

These factors as well as the overwhelming role played by urban warfare during the conflict forced the SAA to find a way to maintain the combat efficiency of its tank fleet at an acceptable level by whatever means were at hand. This led to various DIY-style modifications of battle tanks. Many of these modifications varied from unit to unit. Nonetheless, at least some of them resulted from centralized and consistent work by the Syrian military.

These battle tank modifications can be divided into three groups: passive measures, active protection measures and improvements related to electronics.

Armour modifications were mostly a result of experiments by the Republican Guard and the 4th Armored Division.

In August 2014, the 4th Armored Division began to upgrade T-72M1s, as well as military bulldozers, and even Shilka self-propelled guns in their workshop in Adra. The battle tanks upgraded there got the name T-72 Adra but are more widely known as the T-72 Mahmia (Shielded).

The initial T-72 Mahmia had cages with what appears to be spaced armor bolted and welded onto the tank with support beams. Chains with steel balls were added to new hull side-skirts below the turret’s cage armor. In some cases, the frontal part of the added armour was filled with an unknown material.

This armor is supposed to stop enemy rockets and explosives from penetrating the tank’s hull or turret. The idea is that an RPG would hit the cages and explode away from the tank armour thus keeping the tank safe. However, this kind of protection is not enough to stop an ATGM strike.

Another version of the T-72 Mahmia appeared in 2016. It used thicker girders to apply and hold cage armor to the vehicle, the ball and chain armor was removed, a larger hull bumper, with spaced armor added onto it was included, the cage armor was heightened, and more, apparently thicker, spaced armor was added to the glacis plates.

There were versions, which featured full cages, however they appeared to be unsuccessful.

Another modification was the T-72 Shafrah (Razor), which was employed by the Republican Guard’s 105th Mechanized Division. It appeared to be aimed at resisting ATGMs.

Numerous brackets are placed on the tank’s turret, which have a number of angled plates welded onto them. Some tanks have sideskirts, which follow a similar pattern.

The T-72 Shafrah is equipped with composite armor, which looks like that which can be seen on the Iraqi T-55 Enigima. This armour is supposed to stop some ATGMs, especially the older generation.

The T-72 Shafrah was first documented in combat in Eastern Ghouta on February 27, 2017, when it was hit by an ATGM. The driver was wounded and the turret was damaged, but the tank was not destroyed. There were 7 documented T-72 Shafrahs and all of them appeared to have been successfully used in combat.

Some active protection systems were also developed. The most prominent example is the Sarab (Mirage) developed by the Syrian Scientific Research Center (SSRC). This is a jamming device against all SACLOS (semi-automatic command to line of sight) guided ATGMs. It utilized either classical IR emitters or LEDs depending on the production model and could work for 6 straight hours and be easily mounted on all vehicles as well as stationary checkpoints and defensive points.

The Sarab-2 utilized newer emitters and was fitted with new more powerful batteries. This increased its operation time to 10 hours before requiring a recharge. The system also got a more durable external container for added protection. It was widely used in the battle for Aleppo in 2016. In many cases, shots fired from BGM-71 TOW ATGMs landed barely any hits on infantry fighting vehicles or battle tanks protected with the Sarab-2.

After addressing the Sarab-1’s design issues in the Sarab-2, the SSRC focused on developing a complete soft-kill, or passive-countermeasure system rather than only a jamming system. The Sarab-3 covered 360 degrees, instead of 180.

Besides this, SAA T-55 tanks were upgraded with North Korean fire Control systems. The modernization included a 4km rangefinder as part of a sensor complex, which includes a barometer, a hygrometer, and a thermometer. A new ballistic computer, which makes calculations based on the data it receives from the meters and the rangefinder, was added with a digital screen showing environment measurements and range to the target.

Some T-55s upgraded with North Korean systems were also fitted with a KPV 14.5mm heavy machine gun and smoke screen launchers. Some of them also had thermal sights.

Some T-72 main battle tanks were equipped with TPN-3-49 night vision sight, which turned out to be unreliable and unsuitable for urban warfare. The main issue was that protecting the IR lamps from enemy fire was barely possible as was the idea of fixing it repeatedly. Therefore, the TPN-3-49 was replaced with the Viper-72 thermal sight. Its outer design was similar to the TPN-3-49 but with an arch shaped protection. It also used many TPN-3-49 components.

The Viper-72 has a range of up to 4km for large objects. In reality, the aiming range appears to max out at 1.5-2km. The tank gunner aims through an electronic scope, but an LCD can also be attached. It was much more successful than the night vision, since firearm nozzle flash is more visible in thermal imagery. The Viper-72 is being used even in daylight to detect snipers in urban areas.

In general, the introduction of these modifications allowed the SAA to partially reduce losses of equipment and casualties among tank crews. It should be noted that many of these modifications were not a result of a tank crew simply upgrading their own hardware, but rather of a focused upgrade program, which introduced new changes based on an ongoing history of trial and error (errors which quite often had had fatal consequences).

At this point in the conflict, they are largely unnecessary and outdated, mostly due to the Russian military’s assistance in supply and maintenance. While most of the Russian efforts in this field remain underreported, the technical assistance and supplies Russia provided have played an important role in restoring SAA combat capabilities since 2015. Nevertheless, these DIY-style upgrades played their own role in the course of the conflict.