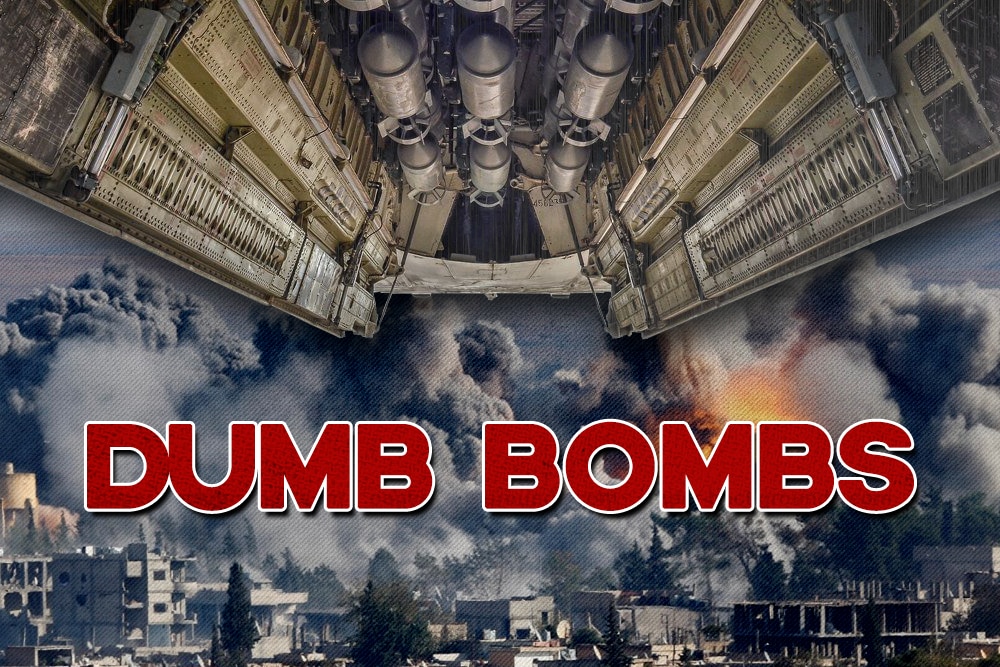 A recent series of Russian strikes on positions of militant groups in the Syrian province of Idlib has once again caused a wave of mainstream media reports regarding civilian casualties caused by Russian bombings. According to “local activists” quoted by media, the Idlib strikes led to tens of civilian casualties. There are no MSM reports about casualties among members of militant groups or destruction of their infrastructure.

Since the very start of the Russian military operation in Syria, Russia has been under fire over its usage of unguided weapons – missiles and bombs – as a main mean of engagement. The key idea repeated by Western diplomats, military officials and media in various formats is the following:

While the US-led coalition carries out pinpoint strikes with precision weaponry, the Russian Aerospace Forces employ indiscriminate strikes with unguided bombs, which are often being dropped from high altitudes.

Both the US and Russia accuse each other in causing civilian casualties and humanitarian crises in Syria on a constant basis. Besides this, Washington and its allies have a much wider understanding of the term “moderate opposition” than Moscow has ever had.

A significant difference can also be observed on the level of employed weapon systems and munitions.

A guided bomb or a “smart bomb” is the type of bombs with guidance and control systems. Some versions even have small rocket engines increasing their range and control over their flight.

Guided weapons cost much more than their unguided counterparts, but supposedly allow to put fewer air crews at risk, spent less ordnance and reduce collateral damage. The creation of precision-guided munitions resulted in the retroactive renaming of older bombs as unguided bombs or “dumb bombs”; with these “dumb bombs” actively being used by Russia.

In August 2017, Deputy Chief of the Russian General Staff Lieutenant General Igor Makushev revealed that 50% of basic missions for wiping out militant facilities by airstrikes in Syria were performed by Su-24M bombers and Su-25SM attack aircraft. These aircrafts were designed to provide a fire support for ground forces and were using unguided weapons massively. Besides them, 250kg and 500kg unguided munitions were actively employed against infrastructure belonging to ISIS in eastern Syria by Tu-22M3 strategic bombers.

What mainstream media does not cover is that while the Russian Aerospace Forces massively used “dumb bombs”, the strikes themselves were “smart”. Russian warplanes employ specialized computer sub-system SVP-24 Gefest, which allows the use of unguided munitions as high-precision weapons.

Prior SVP-24 modernization of guidance systems were focused on the targets positioning. This is a road to the further increase the complexity and cost of employed weapons. The system incorporates a difference concept; it focused on the positioning of weapon carriers.

SVP-24 analyzes data of the GLONASS satellite navigation grouping on the mutual location of the aircraft and the target, takes into account the level of atmospheric pressure, air humidity, wind speed, the flight velocity, and some other factors to calculate the route, speed and altitude of dropping air-launched munitions, after which the warplane reaches a pre-determined position and conducts the strike in almost an automatic mode.

SVP-24 receives additional data from airborne early warning and control aircraft, like the A-50, other warplanes, and ground detection stations.

According to the Russian military, the usage of the SVP-24 ensured the efficiency of striking enemy installations with unguided bombs comparable with the accuracy of using smart bombs. The bombing accuracy is 4-7m from the altitude of 5-6km. Furthermore, aircraft with SVP-24 are capable of conducting strikes in free maneuver, out of the range of enemy’s local air defense.

Besides the obvious economic advantage of this approach, the SV-24 became one of the factors which allowed the Russian air group in Syria to increase the number of combat sorties per aircraft.

In one of the hottest years of the conflict – 2016, the Russians had about 70 aircraft deployed for operations (46-48 at Hmeimim and 32-36 from Admiral Kuznetsov). This group was conducting approximately 70-80 combat sorties per day. Therefore, one Russian combat aircraft was involved in at least one combat sortie per day.

At the same time, according to the Pentagon’s data, aircraft of the US-led coalition made about 19.68 combat sorties per day. Taking into account that the coalition had about 180 aircraft deployed for operations, one coalition aircraft was involved in 0.1 combat sortie per day.

These numbers lead to expected questions: Who was really fighting terrorists in Syria? And who was making money and perceiving its own political interests?