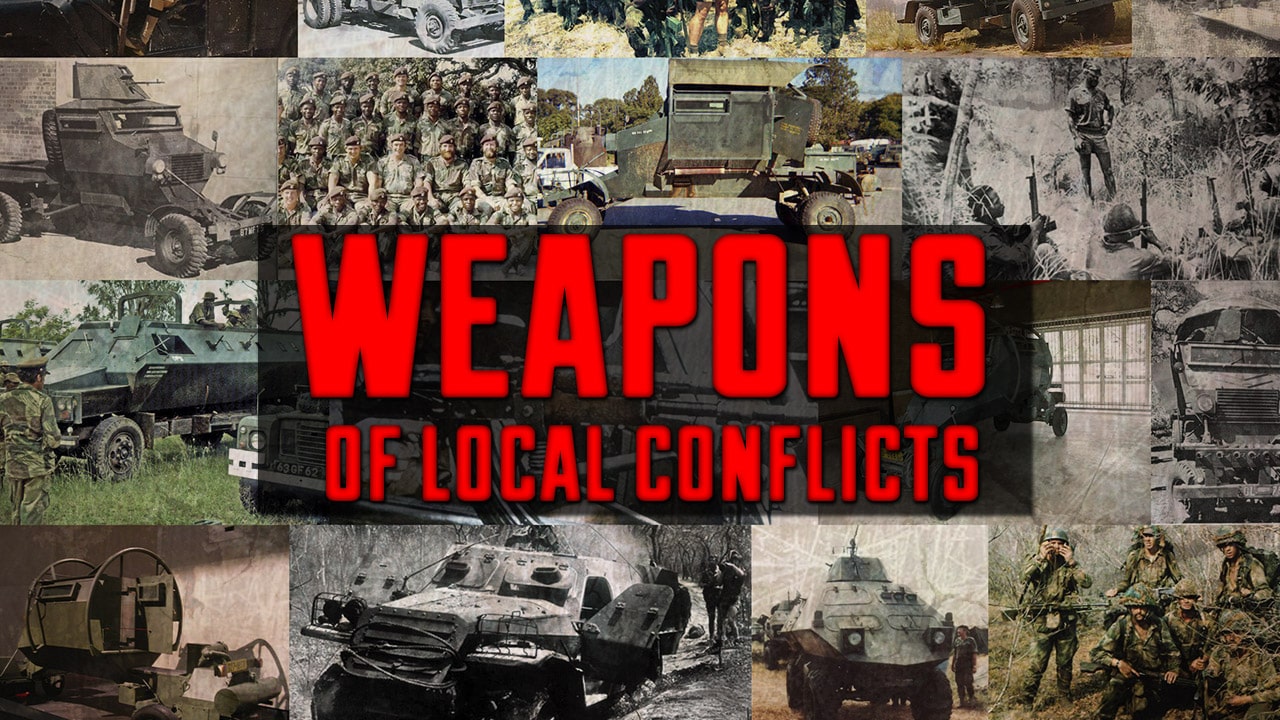 Rhodesia, the predecessor state of modern Zimbabwe, had a relatively short, but interesting history.

The Rhodesian Bush War, which raged from from 1965 to 1979, led not only to the creation of the independent state of Zimbabwe, but also gave rise to multiple technical innovations in the art of war. The need for these DIY-style solutions, some of which later went into serial production, was the result of a strict sanctions regime and arms embargo which forced Rhodesians to invent different ways and tools to defend their own lives, property and vehicles as well as various means of offense. A glut of makeshift self-defense means among Rhodesians started with Ken Goosen who built a DIY four-barrel single use shotgun to defend his homestead in Claremont (near Bulawayo). It was named Kill Quick.

The device had four short 12 bore shotgun barrels lined up as a fan. While unarmed they were in a vertical position, and did not pose a threat to people farming. If intruders entered the premises, the owner would pull a rope connecting the device to somewhere inside the house, pulling out the safety pin. The Kill Quick would move to a horizontal position, striking a fixed anvil in the process, and fire out of all four barrels simultaneously. Activating Kill Quick could impede the progress of an ambush sufficiently enough to afford defenders the opportunity to hide, flee, or call for reinforcements.

Soon enough, this device, and variations of it (e.g. using an actuator for striking the anvil, bumping up the number of barrels to five or more, using longer and wider barrels and so on) was used at every remote homestead across Rhodesia.

Farmers even equipped their cars with such devices. This did not help much with the mines, but it sure did surprise some road ambushers. Mounted on the front — and later on the sides — Kill Quick allowed the driver to clear out the nearby bushes in order to make a quick getaway.

A device called Spider was on a whole new level — it fired simultaneously out of 24-36 barrels, covering the space around the car from 270 to 360 degrees. This device was often mounted on the roof of a vehicle. Rebels called it ‘zhamu-zhamu’ – the noisemaker.

The military also employed some DIY solutions. Getting into firing position with a machine gun takes time. Quickly responding to an ambush with one is out of the question. Therefore, military engineers started mounting “sawed-off” assault rifles and machine guns on special turrets, installed in the driver’s door.

Besides that, two Kalashnikov assault rifles were often installed in pickups behind the driver seat’s, firmly fixed in the body of the car. In case of an ambush, the driver would speed up and trigger the guns using an actuator by pressing a button on the deck. It was single-use, but having 30 shots fire and clearing 50m of road was quite sufficient. Rhodesian special forces, the Selous Scouts, even used two RPD machine guns with 90 bullet snail drums instead of assault rifles.

Besides participation in open clashes, all the sides of the conflict actively mined roads and areas near key infrastructure objects. For example, from 1972 to 1980 there were 2,504 vehicle detonations of land mines (mainly Soviet TM46s), killing 632 people and injuring 4,410. The intensity of the land mine warfare was so high that unexploded mines and munitions still remains a notable problem for Zimbabwe.

This led to the development of a range of mine protected vehicles. Initially, ordinary vehicles got protection made of steel deflector plates, sandbags and mine conveyor belting. Additional tires were placed on top of vehicles in order to reduce damage in the event of flipping as a result of an explosion. These improvised protection measures allowed for a nearly 3 times immediate reduction of casualties due to mine explosions.

There were also efforts to create purpose-built mine-resistant ambush protected vehicles with V shaped blast hulls, which dispersed the blast.

The Leopard security vehicle, which was actively used by the civilian population and the government, was developed by Ernest Konschel in 1974. It carried a driver on the front right, 2 passengers behind on the right, and three on the left. It was powered by a Volkswagen Type 1 engine located in a non-armoured enclosure at the rear, behind the rear axle.

The vehicle had a V-hull cab, circular external roll over bars, and a soft-top roof to prevent undue pressure build-up in the hull in the event of a land-mine blast. The vehicle’s road wheels were positioned well away from the hull, so that if a mine was triggered by a road wheel the hull was not directly over the blast. All passengers were on bench seats fixed to the hull and facing inward.

The Leopard, however, suffered from a number of critical problems, which limited its usage in military actions. They included overheating of the engine, a lack of power for traversing difficult terrain and for escaping ambush situations, and the unintended parting of the front or rear sub-assemblies from the hull while traversing difficult terrain.

The Pookie became a first vehicle designed to deal with the constant mining of the roadways. It was a one-person vehicle with a V-shaped reinforced hull and large Formula One tires bought second hand after the South African Grand Prix. It comprised of an armored capsule raised 700 millimetres above the ground between the front and rear suspension units taken from the Type Two Volkswagen Kombi. The wide tires were intended to prevent the detonation of buried mines by exerting a low ground pressure and by spanning the mines’ circumference.

To detect mines, the Pookie used lowered detection panniers, which were positioned parallel to the ground below the cab. When the vehicle was transported, the pans were raised to a 45 degree angle. The vehicle had a speed of up to 80km/h and was often used to provide security during the movement of military columns.

Another problem was the mining of dirt airstrips. To deal with that, Rhodesian forces employed a device called FU-2. It was a one-seat bicycle with detection panniers and a working set for the operator. Information about this device and its practical employment is limited. According to reports, it was capable of covering about 2 square meters simultaneously.

After the end of the Rhodesian Bush War, the remaining Mine Resistant Armored Vehicles (MRAP) were used to clear territories from unexploded land mines, improvised explosive devices and munitions. Devices like Kill Quick- and Spider-like devices went out of use.

At the same time, the Rhodesian conflict demonstrated the high efficiency of such improvised upgrades, especially in the conditions of limited resources. Knowledge gained from this experience was actively used in multiple local conflicts in Africa and in the Middle East.