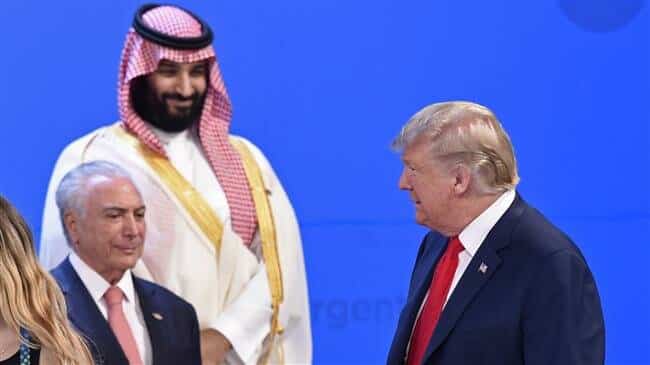 [ Editor’s Note: This is good news about the Senate holding firm on not wanting the Saudi nuclear deal to proceed where it has a free hand to not be under the same restrictions as others, where the Saudis want to be able to reprocess weapons grade material.

Many suspect that Jared Kushner has been pushing this deal to get the Crown Prince’s support for rolling over the Kushner family real estate debt that could come crashing down them if he does not.

This is just one of a number of Trump family deals that we have been hearing reports of “side” deals being arranged, with Trump looking at the dispensing of Federal funds and influence as a giant piggybank.

Of course the Fake $100 billion Saudi arms order from the US if fake, a show deal arranged so Trump could claim creation of a million jobs out of thin air. Only around $10 of real orders have been inked to date.

If true, prosecuting such corruption endeavors would require a fiercely independent Attorney General, which we do not appear to have at this point. That is why political old timers have always warned us that for the Deep State crooks, having friendly people in all law enforcement and judiciary top slots is their best way to avoid prosecution.

And they are not hesitant about spending a lot to block all legal avenues to bringing them down by sharing their ill-gotten wealth.

That said, the story is a bit of a charade as VT has reported, and never been challenged, that the Saudis have had nukes for a long time. The difference now is they want to be able to bring them public so they need this deal to hide the history of where their old ones came from …Jim W. Dean ] 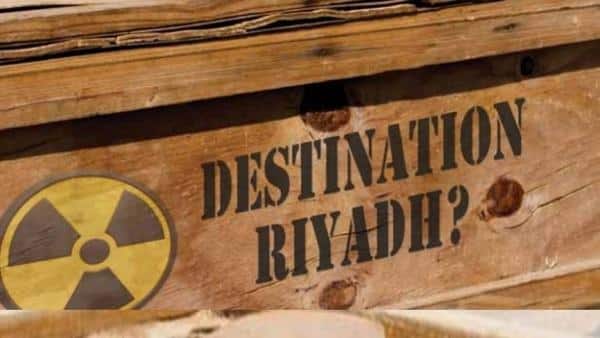 The senators specifically pointed to Riyadh’s insistence on forgoing Washington’s so-called 123 agreement, a set of nonproliferation standards required by Section 123 of the US Atomic Energy Act of 1954.

The 123 agreement, often referred to as Washington’s “gold standard” for foreign civil nuclear cooperation, prevents the foreign entity from enriching uranium or reprocessing plutonium made in reactors – two routes to making nuclear weapons.

“As has been reported, Saudi Arabia has repeatedly asked during nuclear cooperation negotiations that no limitations in a 123 agreement be placed on its ability to enrich uranium and reprocess its spent nuclear fuel,” the senators write.

“Many in Congress therefore worry that Saudi Arabia’s interest in someday producing its own stocks of nuclear fuel—despite the fact the Kingdom could purchase fuel on the international market more cheaply—could lead to it to divert fuel to a covert nuclear weapons program.”

Negotiations between the US and Saudi Arabia for nuclear cooperation came to a halt under the administration of former President Barack Obama, after Riyadh refused to accept Washington’s proposed standards.

In its never ending quest for more money, the Trump administration resumed the talks and is reportedly considering a deal that would allow Riyadh to enrich and reprocess uranium and pave the way for American companies to build nuclear reactors in the kingdom.

Financially, the deal is assumed to be lucrative enough to match the money-driven politics of Trump, a businessman-turned-politician who is not afraid of overstepping boundaries for more dollars.

In 2017, Trump flew to Saudi Arabia and secured a $110 billion deal to provide the kingdom with advanced weapons. Last year, he famously said that the deal would help America keep “a million jobs.”

Rubio and Menendez warned in their letter that it was not a good idea to provide Saudis with nuclear technology or know-how amid Congress’ attempts to reevaluate ties with the kingdom in the wake of its “many deeply troubling actions.”

“The Kingdom has engaged in many deeply troubling actions and statements that have provoked alarm in Congress and led lawmakers to begin the process of reevaluating the US-Saudi relationship and our long-term stability and interests in the region,” read the letter.

“We therefore believe the United States should not be providing nuclear technology or information to them at this time,” it added.

The senators also raised questions about the process that led to Washington’s decision to push ahead with nuclear talks despite many tell-tale signs that provided a glimpse into Riyadh’s real intentions.

The Trump administration has so far ignored calls at home and abroad for it to confront bin Salman over the kingdom’s murder of dissident journalist Jamal Khashoggi in October, which experts and members of both parties believe bin Salman had a hand in.

In fact, Trump has gone as far as suggesting that punishing Riyadh for a crime that it has openly admitted to would endanger Israel and hurt Washington’s own interests.

Trump’s critics associate his reluctance to come face to face with Riyadh to his possible financial interests in the kingdom, a hot topic that is set to undergo an investigation by the Democratic-controlled US House of Representatives later this year.

“There are a whole set of potential financial conflicts of interest and emoluments problems that Congress will need to get to the bottom of,” Democratic California Representative Adam Schiff said in late November, before being elected as the head of the House intelligence committee. “If foreign investment in the Trump businesses is guiding US policy in a way that’s antithetical to the country’s interests, we need to find out.”

There are also questions about the possible interests of Trump’s son-in-law, Jared Kushner, who is believed to be the driving force behind many financial deals between the US administration and the Riyadh regime, including the $110 billion arms deal.

The Washington Post reported February last year that officials from at least three countries — Mexico, China and the United Arab Emirates – and Israel had discussed ways they could use Kushner’s complicated business arrangements, lack of experience and financial woes to manipulate him and affect US policies.