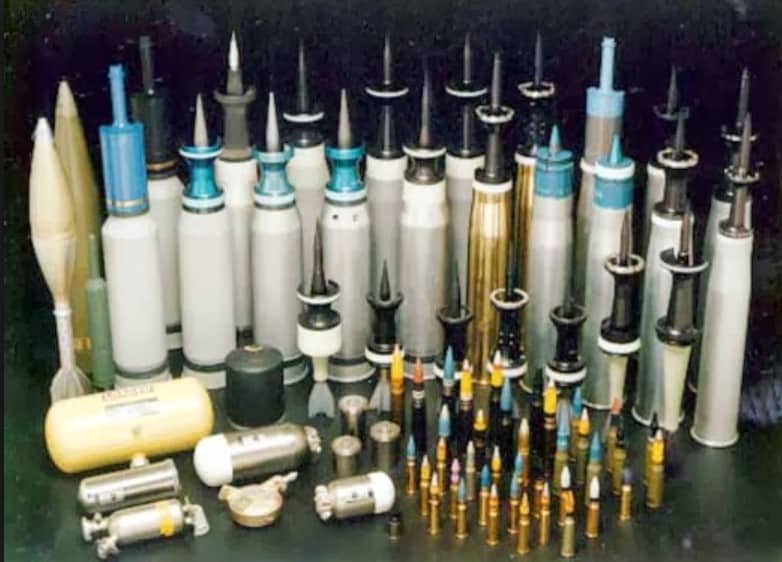 Sputnik/Moscow: In a new book named “Deadly Dust – Made in the USA: Uranium Weapons Contaminating the World” German author Frieder Wagner gives a detailed account of how the US has contaminated vast territories using depleted uranium (DU) ammunition and the cover-up strategy of the military, industry and governments, as well as those in the media and politics.

Sputnik: Mr Wagner, in your book “Deadly Dust — Made in the USA: Uranium Weapons Contaminating the World” you talk about the use of uranium ammunition. What is especially dangerous about these weapons?

Frieder Wagner: Weapons containing uranium are produced from nuclear industry’s waste (byproducts of uranium enrichment). If, for example, you want to produce a ton of natural uranium fuel rods for nuclear power plants, you get about eight tons of depleted uranium. It is a source of alpha radiation — radioactive and, moreover, very poisonous. It needs to be stored somewhere, and it is not very cheap.

Sputnik: How can it be used in weapons?

Frieder Wagner: About 30-40 years ago, military scientists made a discovery: uranium is almost twice as dense as lead. If you turn depleted uranium into a projectile and give it proper acceleration, then within a fraction of a second it will pierce through tank armor, concrete or cement.This, of course, was an important discovery. Furthermore, when a shell hits an armored tank the impact produces dust caused by the detonation and the subsequent release of heat energy causes it to ignite and it explodes at a temperature of 3000 to 5000 degrees — incinerating the tank’s interior and destroying it.

Sputnik: But what happens afterwards is also a problem — after the use of DU ammunition, isn’t it?

Frieder Wagner: Yes! After its use depleted uranium, which, as I have already said, is a source of alpha radiation (that is, a radioactive and very toxic substance), burns down to nano-particles that are a hundred times smaller than a red blood cell. 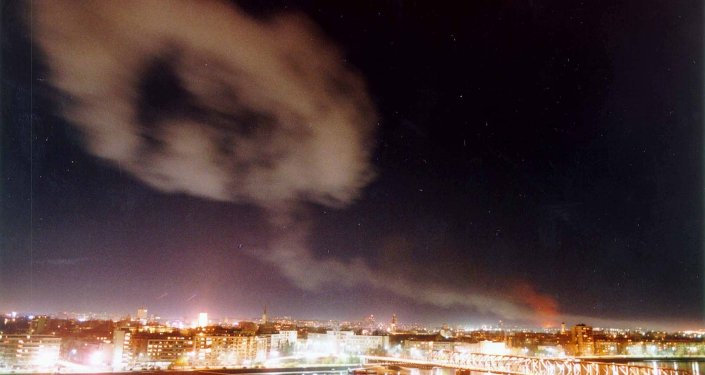 This way, I would say, a sort of metallic gas forms that people can inhale, and which is released in the atmosphere and can be carried anywhere by wind. People who inhale it are at risk for developing cancer.These nano-particles can also penetrate the body of a pregnant woman, overcoming the barrier between a child and a mother, and affect the health of an unborn baby, can infiltrate the brain and by travelling through the bloodstream end up in any human or animal organ. Everything that goes around the planet, sooner or later settles and, of course, contaminates, in particular, drinking water and everything else.

Sputnik: In what wars have DU weapons been used so far?

Frieder Wagner: It was actively used during the first Gulf war in 1991 against Iraq. The military has admitted that about 320 tons were used. Then in the second war in Iraq in 2003 over 2,000 tons were used. In between, it was used during the war in Kosovo, in Yugoslavia (1999), and in Bosnia in 1995, and after 2001 in Afghanistan, where it still used today.

Sputnik: Your book title says Made in the USA, were these weapons only used by the United States?

Frieder Wagner: They were being developed in several countries at the same time. In Germany, they were also working on these weapons, as, of course, in Russia. However, it was used and on such a large scale, only by the US. They were reckless and they did not pay attention to any possible side effects — just as it was back when the first atomic bombs were used. That’s why I called the book: “Deadly Dust — Made in the USA”.

Sputnik: How did you manage to prove the use of these ammunitions in the course of your research?

Frieder Wagner: For example, the Serbs gave us maps where they showed the locations where depleted uranium was used. When we were in Iraq, we talked to the locals. We traveled to places where large tank battles took place and took soil samples there, as well as dust samples from tanks. Looking at the tank, you can see whether it was hit by an ordinary projectile or a uranium munition.

Uranium munition leaves dust that burns everything around the hole made by the projectile. So you can determine the use of uranium ammunition. In all soil samples, we found depleted uranium. Unfortunately, uranium-236 was also found in most of the soil and dust samples — it is even more intense and poisonous. Its radiation is even stronger and does not occur in nature. It can only be produced artificially during reprocessing of fuel rods. This means that we were able to prove that the military, the United States and its coalition allies used uranium munitions made from spent uranium fuel rods.

Sputnik: Your book is based on the films The Doctor, the Depleted Uranium, and the Dying Children of Basra (Der Arzt und die verstrahlten Kinder von Basra, 2004) and Deadly Dust (Todesstaub, 2007). What did you see in Basra during your work on the documentary?

Frieder Wagner: It was horrific and still sometimes haunts me in my dreams. These were children with deformities, which we saw in orphanages in Basra and Baghdad. Some of them had such deformities that they had almost nothing human anymore.

There were children without a head or a nose, either with one eye or without eyes at all, with internal organs in a kind of “sack” outside their body. These ‘creatures’ can live only for a few hours, experiencing terrible pain, and then die.

Sputnik: The film “Deadly Dust” is linked to the book, but it is no longer distributed. WDR channel after this film did not make any more orders? Why is that?

Frieder Wagner: My exposes which I sent to WDR, as well as to the ZDF channels were rejected. Then I contacted an editor at WDR, for which I always made good films and with which I always had good relations with, because these films had doubled or trippled their ratings, and asked him: “What’s going on here?”” And after some hesitation he said: “Yes, Frieder Wagner, someone must tell you this. WDR considers you a ‘difficult’ person. And most importantly, the topics you suggest are especially hard. Right now I’ve got nothing more to tell you.” And that when I understood everything. It was in 2005.

I can also tell you the story of how, for example, a female editor at ZDF offered the TV channel a story on the use of these weapons during the war in Yugoslavia and also in Croatia. She wanted to talk about it with me prior so I could share my experiences. But when her boss found out that she wanted to talk to Frieder Wagner, he refused to pay for her trip — without any further explanation.

Sputnik: The so-called “deadly dust” is, as you have already described it, is spread by the wind. So should the use of uranium ammunition, in fact, be considered a war crime and banned?

Frieder Wagner: This is definitely a war crime. The dust from southern Iraq is carried to the north by the constant storms, the so-called desert storms — for example, to Erbil, where it meets the mountains and can’t travel further as the mountains make it difficult for it to go past towards Turkey. So this huge mass of dust settles in Erbil.We, for example, took samples of beef from around Erbil, and this is what we found out: depleted uranium used in ammunition has a characteristic atomic “fingerprint”. In northern Iraq we found the same “uranium fingerprint” as in the south. This means that the uranium dust that had originally settled in the south of Iraq is now also in the north, and children are now getting sick there and are born with deformities. It is now spreading all over the world.

Sputnik: Have the victims of uranium munition use in Kosovo or, for example, in Iraq, tried to go to court?

Frieder Wagner: So far no such attempts have been made in Kosovo or Iraq. Now in Kosovo, a whole group of lawyers are working on a lawsuit against NATO, because after the war they unleashed, people were injured, fell ill and died. The morbidity rate has increased by 20 to 30 percent, and there are more effected each year. So there will be an attempt to file a lawsuit.

Out of the approximately two thousand Italian soldiers stationed in Iraq and Kosovo, 109 have later developed cancer and died — this is proven information. 16 families, out of the 109 dead, filed lawsuits and won their cases. The courts ordered the Italian state or the country’s Ministry of Defence to pay them compensation. Since each cancer was of a different type, the payout amounts differed. But they ranged between 200,000 and 1,4 million euros.

Sputnik: How are things in Germany? Have there been lawsuits filed by the soldiers of the Bundeswehr?

Frieder Wagner: The German Ministry of Defense constantly denies any connection to this. Our soldiers are stationed in Afghanistan and Kosovo. About 100,000 soldiers served in Afghanistan, and we found out that about 30% of those who returned got sick, although at first, of course, they do not notice this. If they subsequently marry and have children, then there’s a great risk that their children will have disabilities.These children will have the same toxic substances in their DNA as their parents. And this will be passed on for several generations — from children to grandchildren and to great-grandchildren.

Sputnik: But none of these people ever filed a lawsuit?

Frieder Wagner: In Germany there were no such precedents. About 600 servicemen went to court in the United States who could not appeal on their own behalf, but they filed lawsuits on behalf of their children who were born with developmental disabilities. And we’re not talking about a mere 90 or even 900 million pay out, but about billions of dollars now. The United States, of course, will try to delay the adoption of a ruling as much as it is possible and hope for a “biological” resolution of the situation — that is, that the plaintiffs will simply die.