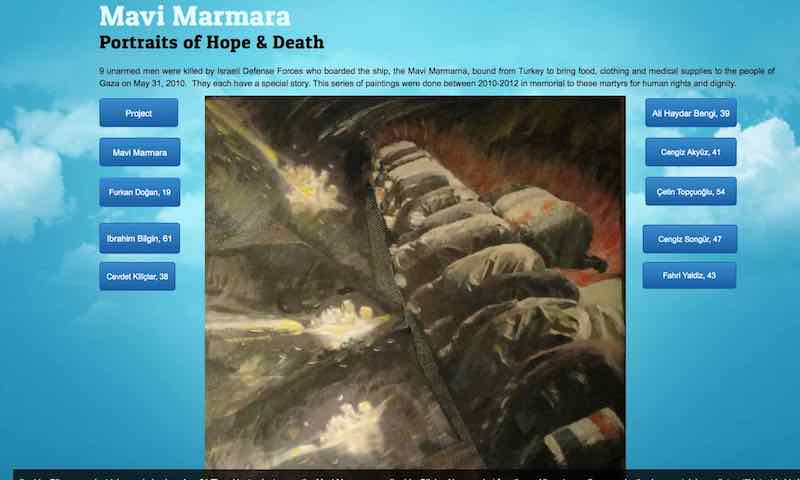 Listen to my interview with Dr. Basker, recorded yesterday, HERE

Dr. Jacqueline Casale Taylor Basker is a Visiting Professor of Islamic Heritage, Preservation and Conservation at the German-Jordan University, Amman, Jordan. In summer, 2001, she was working on the 95th floor of the South Tower of the World Trade Center, where she and other workers at Fiduciary Trust witnessed the comings and goings of mysterious “ghost visitors” doing unspecified work in areas that had been cordoned off.

In this interview we discuss the “ghost visitors” and much more, including her experiences in Occupied Palestine, her paintings inspired by those experiences, and the role of sacred art and architecture. The image above is part of her series of paintings commemorating the victims of the Israeli mass murder of activists aboard the Mavi Marmara.

Below is her article submitted to and rejected for publication by West View News.

9/11:  My Survival and Memories of The Mysterious WTC ‘Ghost’ Visitors

April is my birthday month.  I have an opportunity to celebrate another year of life due to my third graders in Bedford-Stuyvesant, Brooklyn, to whom I am very grateful.  I should have been killed on 9/11 while working with Fiduciary Trust in the South Tower on the 95th floor, trapped ten floors over the impact area of the United Airlines Flight 175.

I had a summer job working as a paralegal for Fiduciary Trust, helping wealthy people give away their money to worthy causes.  I worked with arts groups, which as an artist I particularly enjoyed doing.  This was during my vacation as a Special Education teacher at P. S. 305 in Bedford-Stuyvesant.  It was a good gig, close to my home      in Westbeth.  I could bike to work in ten minutes, enjoy gourmet coffee and corporate perks, as well as have a gorgeous view of New York Harbor,  a thick carpet in my office, a good salary and nice people to work with.  I was offered a permanent job, but I had promised my anxious third graders fearful of losing me that I would return after the summer.

I had a special relationship with these kids whom  I loved dearly.  I took them on many wonderful trips including the Plaza Hotel while we were reading a book about the fictional Emily who lived there.  We were taken on a full tour and placed in a luxury suite for tea and snacks.  The students subsequently wrote wonderful book reports.  But the school was difficult to work in and I frequently thought of leaving.  I was tempted by Fiduciary’s offer, but I had reassured my kids, Daniel, Jasmine and Carmen, that I would come back.  I asked Fiduciary for a few weeks at school to see how things were before I gave them my   final answer.  This is why I am still alive.

During the summer we had mysterious visitors   on our floor, non-World Trade Center workers, who appeared a few times in yellow jackets carrying large black bags.  They were not the  usual WTC maintenance men or staff; they had    no badges with names or ID.  They spoke to no one, and entered a section on the floor that was prohibited to everyone, even if you had a pass  to everywhere else.  There were about 4 or 5 men, and we called them “ghost visitors” since they would appear suddenly and silently.   After 9/11 when people suggested the WTC buildings collapse was a controlled demolition, I immediately thought of those strange men with large bags.  Had they planted devices for demolition?  I watched the videos showing explosions from the sides of the building and I became convinced these shadowy guests had something to do with this.  I was in the hospital a few days after 9/11 with inhalation pneumonia from walking through lower Manhattan to get home from Brooklyn and soon developed asthma, breathing in all the dust that floated into my Westbeth window facing the     toxic cloud of death and destruction for months.  Paralyzed as an artist for over a year, I finally was able to make a film about the impact this event had on artists: “Aftermath: 9/11 and New York Artists” interviewing many Westbeth residents, now seen on YouTube: https://youtu.be/AU-asCoIK2w.

One of the artists in the film, Joan Hall, had  done collages with her student some showing      the Towers with an airplane aimed at it, and a figure in a white robe in front.  Following the incident, she was convinced these images were prescient of the disaster.  The day before, on 9/10 while walking my dogs early in the morning, I noticed a rainbow colored cloud circling the WTC, and I told my dogs there were angels dancing around the towers – again a strange omen.

I lost most of my fellow workers in Fiduciary Trust, and it is still difficult for me to go near the site,      or think about what happened.  However, I am  very grateful to my third graders for saving my life.