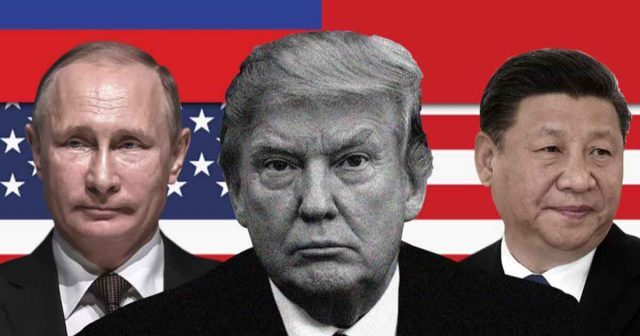 
Both Beijing and Moscow seem to have sent an unspoken ultimatum to the New World Order in Washington and elsewhere: Venezuela is not going to become another Iraq or Afghanistan or Libya.

We have seen how Russia sent military troops to Venezuela last weekend, and now China is backing Russia. New World Order agents like John Bolton are again mad and sad and want to be bad. Bolton himself declared that the United States “will not tolerate hostile foreign military powers meddling” within the Western Hemisphere.[1]

Well, the statement self-destructs, doesn’t it? How did the United States get involved in Venezuela in the first place? Who gave New World Order agents the license to steal, kill, and destroy in the name of “democracy” and “freedom”?

In any event, Secretary of State Mike Pompeo told Russian Foreign Minister Sergey Lavrov that Washington ‘will not stand idly by as Russia exacerbates tensions in Venezuela.”[2] Mr. Pompeo, do you really think that Russia should stand idly by as the United States exacerbates tensions virtually all over the world? As we have argued elsewhere, the United States has been involved in diabolical activities for over a century![3]

NWO agents like Pompeo has not even apologized to the world for the chaos they have created. In fact, they think that the United States should pick up a country every ten years and destroy it. You almost certainly remember Jonah Goldberg’s endorsement of Michael Ledeen’s diabolical ideology. Goldberg unflinchingly declared:

“I’ve long been an admirer of, if not a full-fledged subscriber to, what I call the ‘Ledeen Doctrine’…’Every ten years or so, the United States needs to pick up some small crappy little country and throw it against the wall, just to show the world we mean business.’”[4]

Goldberg and his brethren do not believe in dialogue obviously because dialogue presupposes a moral and political order. Goldberg prefers aggressive expansion:

“There is nothing we want to see happen in the Middle East that can be accomplished through talking around long tables festooned with bottled water and fresh fruit at Swiss hotels, that cannot be accomplished faster and more permanently through war. But there is plenty that cannot be achieved by such gabfests that can only be achieved through war.”[6]

“Wouldn’t an invasion of Iraq result in instability in the region? Yes. But in this context, instability is more likely to be good than bad.”[7]

Did you catch that? Instability is more likely to be good than bad. Now the same people are telling us that they are attempting to establish “democracy” and “freedom” in Venezuela. Who are these people really kidding?

In any event, we should give two thumbs up for Russia and China for saying that enough is enough. If both countries are stopping the New World Order from destroying any other country in the world, then we should definitely applaud such an effort.