Watch Helen Buyniski take down the deep state on FFWN! And click HERE for links to the stories we covered.

Below is Helen’s new article, complete and unabridged.

Former president and smooth (war) criminal Barack Obama paid a visit to his old pal Angela Merkel in Germany this week, reminiscing about the good old days when NATO could declare a no-fly zone in order to wipe out a Middle Eastern nation without a whiff of protest – and collecting a fat check for a speech at a “leadership conference.”

Merkel looked pleased as punch to see her old pal from the pre-Trump era, flashing an unusually genuine smile during their embrace as he left the chancellery. Obama, for his part, has called Merkel one of his “favorite partners” during his two terms in office. Her “hands-off” style of governance dovetailed perfectly with his “speak suavely, but carry a big drone” model of foreign policy – the velvet glove placed over the Bush-era iron fist in order to repair the damage done to the US’ international standing by Dubya’s uncouth stampede to make his daddy proud by finishing off Saddam Hussein.

The pair reportedly discussed “trans-Atlantic relations” during their meeting. The nostalgia session must have proved therapeutic for Merkel after being taken to task by Obama’s successor Donald Trump over Germany’s failure to cough up the two percent of GDP expected from NATO member countries as tribute to the aging military alliance, which just celebrated 70 years of standing tall against an enemy that no longer exists, but remains very much alive in the minds of the military-industrial complex and its media enablers.

And trans-Atlantic relations aren’t in the best shape, with the Trump administration promising recriminations for Germany’s resistance to the non-stop flood of US sanctions against trading partners like Russia and Iran. Certainly, Obama has been much better than his successor at buttering up the German leader, giving her a Presidential Medal of Honor in 2011 – while Trump infamously chucked Starburst candies in her direction during the most recent G7 summit. 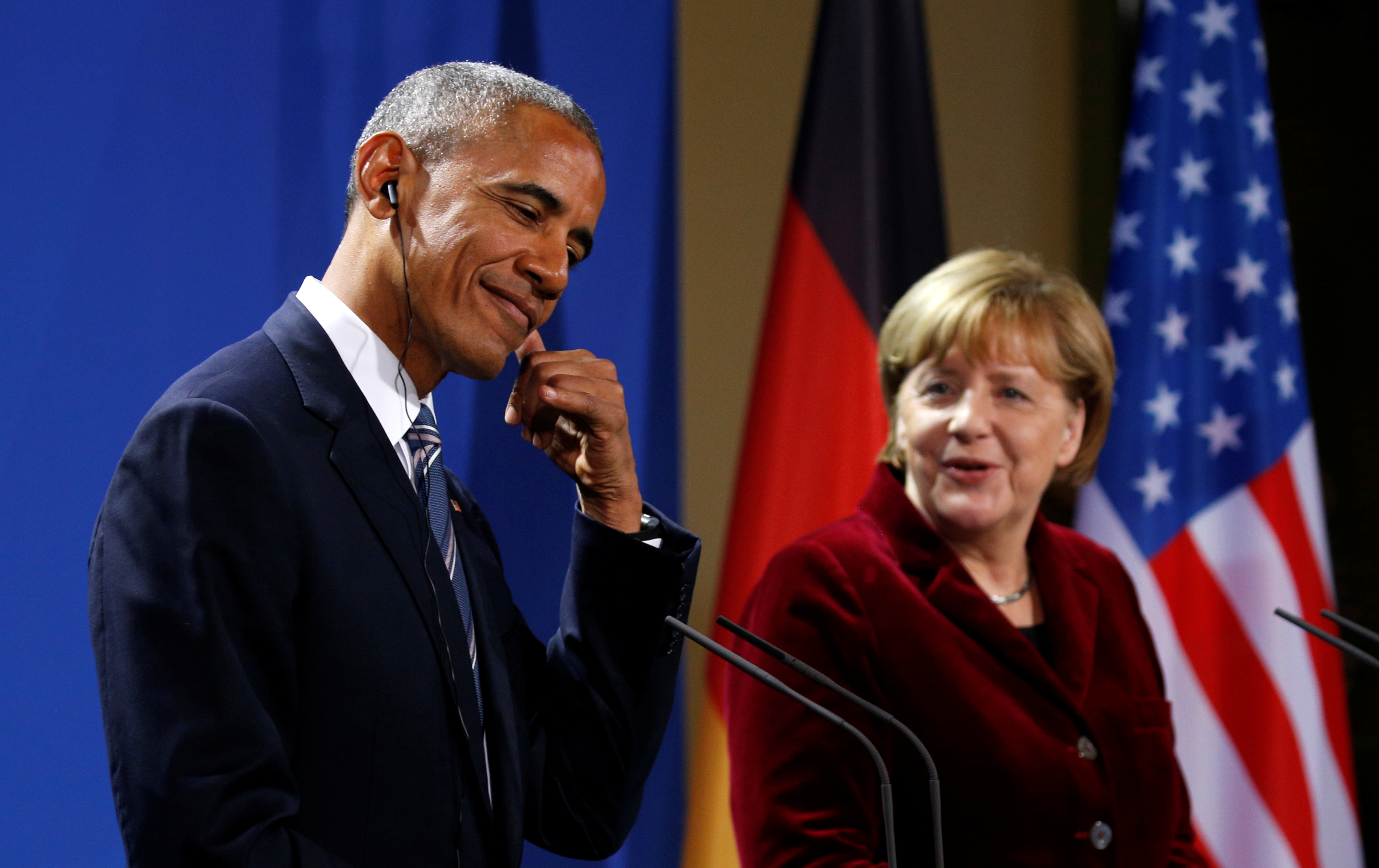 But what did they really talk about during their meeting? Merkel could have allayed her fears that Germany would be cut off from US intelligence over its determination to purchase Huawei 5G tech, with Obama reminding her that US intel isn’t all it’s cracked up to be – with the NSA’s notorious “Stellar Wind” program failing to stop a single terrorist attack even as it had Merkel’s own phone tapped for over a decade. And most of the “terrorism” that takes place in Europe is committed by NATO’s Operation Gladio stay-behind networks anyway, so joke’s on whoever’s tasked with sifting through the “chatter” in the name of national security! They could have shared a big chortle over that one.

And speaking of “terrorists” real and imagined, Obama could have congratulated Merkel on finally admitting that the US was running its drone warfare operations out of Rammstein air base – how brilliant of her to drop that bombshell after Trump’s election and thus focus popular anger on him, as if the drones hadn’t been coming and going for over a decade, mowing down wedding parties and journalists alike as they ticked names off Obama’s infamous “disposition matrix!” He may also have dispensed some sage advice on defanging the local anti-war movement, which got a shot in the arm from the news that Germany was implicated in the extrajudicial US killings that skyrocketed under Obama’s watch. 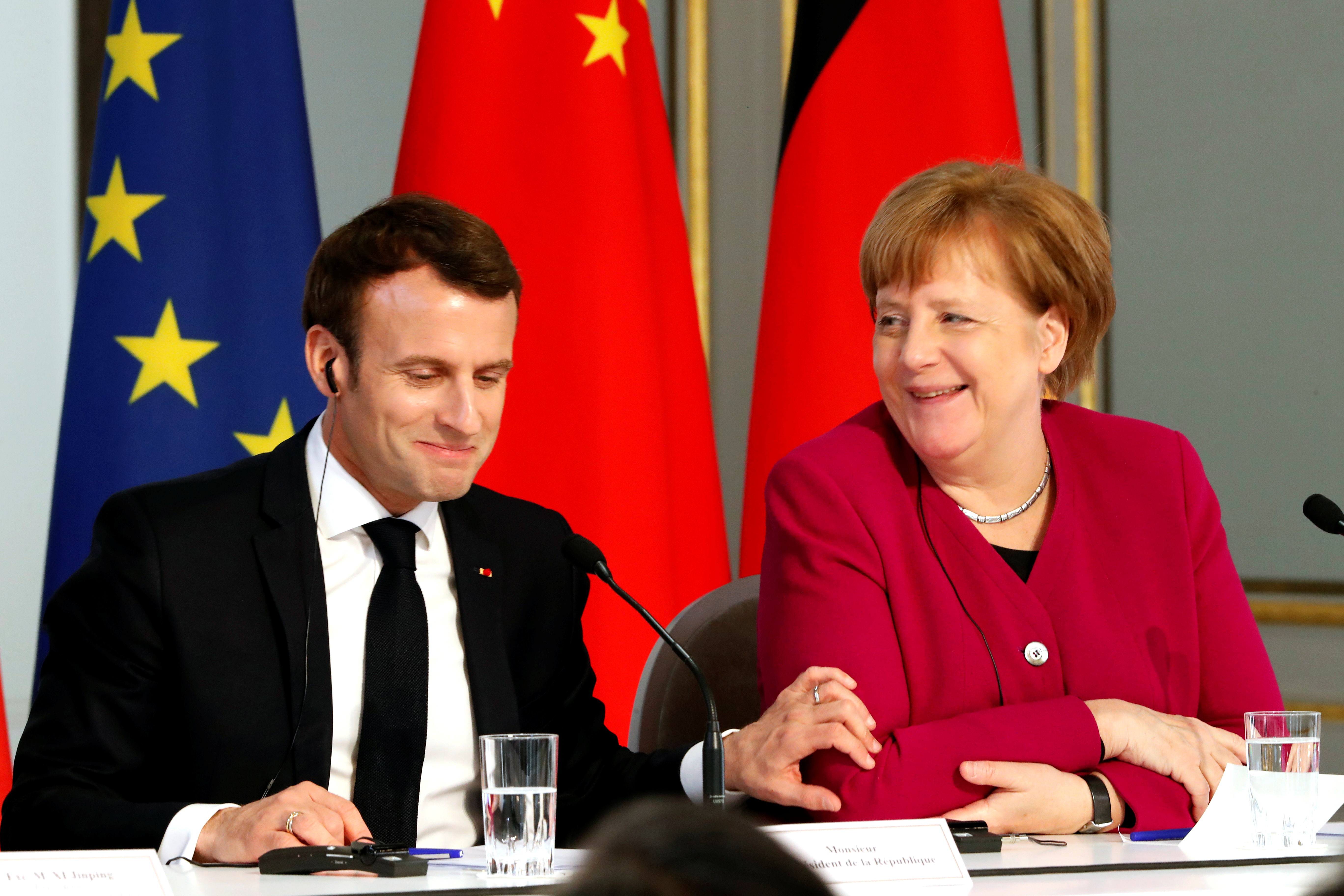 And Obama might have given Merkel some friendly advice on her love life, advising on her burgeoning relationship with the Obama-like pretty-boy-with-Wall-Street-ties president of France, Emmanuel Macron (we already know he has a thing for older women – you go, Angie!) – or just advised her how to relax and learn to love Germany being permanently swamped with refugees created by the wars his administration began or continued.

If the talk drifted to intra-EU politics, Merkel could rely on Obama to lend a sympathetic ear to her complaints about Greece’s failure to show gratitude during her recent visit for the austerity measures imposed by the EU with Germany at the helm, which have placed one in three Greeks in poverty or close to it, ten years later. Under Obama, most Americans never recovered from the 2008 crash either, with nearly 4 out of 5 reporting in 2017 that they were living paycheck to paycheck. But Wall Street is doing better than ever, and that’s what’s important, Obama could have consoled her – what’s the little guy gonna do, blog about it? 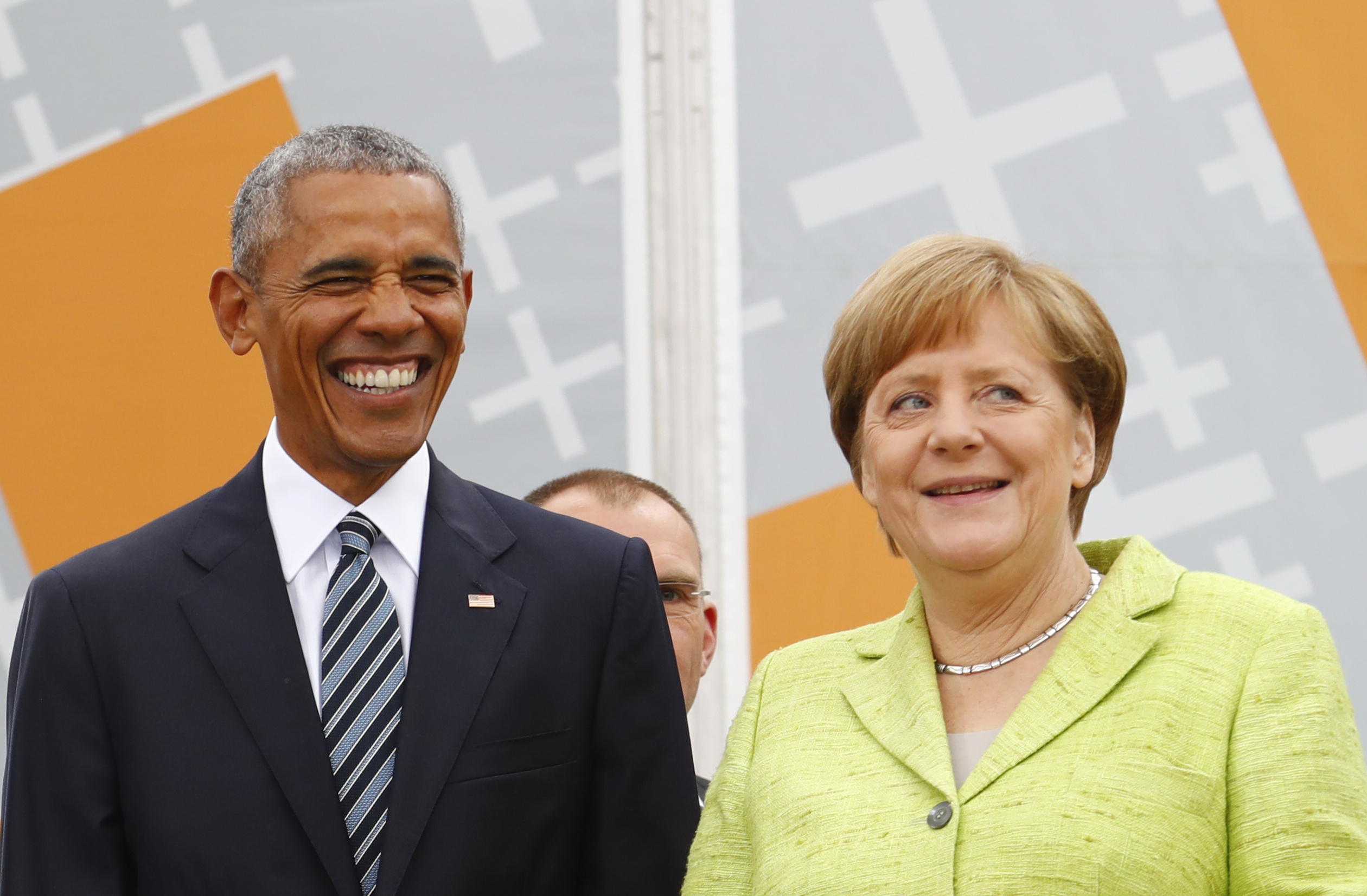 But Obama wasn’t just in town to flirt with the outgoing German chancellor – he had a paycheck to collect, courtesy of the World Leadership Summit in Cologne, where attendees paid anywhere from €85 to €5,000 for the chance to hear the former president pontificate on such pressing issues as climate change, feminism, activism, and – of course – leadership.

The €5,000 VIP ticket not only gave them a chance to watch a person who used to be president eat, but a chance to be photographed alongside the last US leader to enjoy teen-idol levels of international celebrity, on the off-chance some of that fabulousness would rub off on them. Those unable or unwilling to shell out the big dollars reportedly crowded toward the stage, attempting to selfie their way into the president’s aura. As is to be expected from an event billed as a “global leadership summit,” Obama had plenty of vague platitudes for the audience, which lapped them up graciously.

“A good leader is someone who listens and feels what people feel. What drives you forward as leader is the work, not the applause, so focus on what you want to do and not what you want to be,” Obama told the packed hall, to thunderous applause.

He continued his pattern of passive-aggressive treatment of Trump, refusing to speak his successor’s name while making it clear exactly on whom he was throwing shade. “I’m a friend of the facts,” he said, to applause from the similarly fact-loving audience. “This is a table,” Obama then said, indicating the object next to him that was indeed a table. “If somebody says it’s a tree, what, yeah, what should I say?” 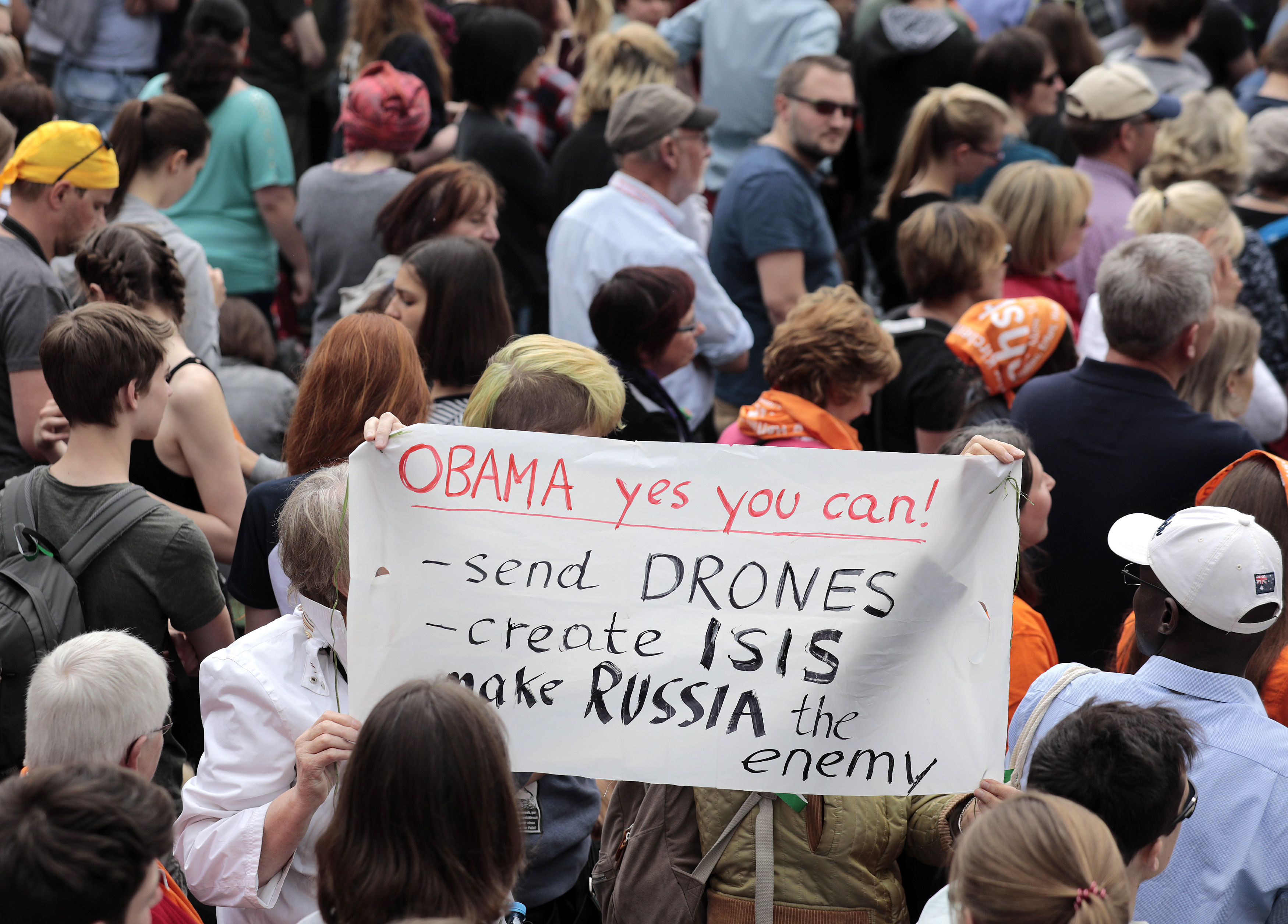 Obama was also asked to weigh in on one of the more controversial aspects of his presidency, the 563 (known) drone strikes he oversaw that left between 384 and 807 civilians dead, not including the thousands of casualties inflicted in “active battlefield” countries such as Afghanistan, Syria, Libya and Iraq – or deaths not reported as civilian casualties, a persistent problem during his presidency, with records showing up to 90 percent of those killed in such strikes were not the intended targets. Obama admitted the decision to rain fiery death hadn’t been an easy one, but said that ultimately he believes drones led to less collateral damage than if he had sent troops into all the places he bombed. Refraining from bombing at all apparently didn’t cross his mind.

“To be effective today, people have to relate to you,” Obama told his adoring fans, and nothing says relatable like a €5,000-a-head VIP dinner. No wonder the ruling class is nostalgic for the days the American Way had such a smooth salesman at its helm – for all Trump’s determination to sell the US out, he can barely get his foot out of his mouth long enough to seal the deal.

SOURCEHelen of Destroy
ATTENTION READERS
Due to the nature of independent content, VT cannot guarantee content validity.
We ask you to Read Our Content Policy so a clear comprehension of VT's independent non-censored media is understood and given its proper place in the world of news, opinion and media.