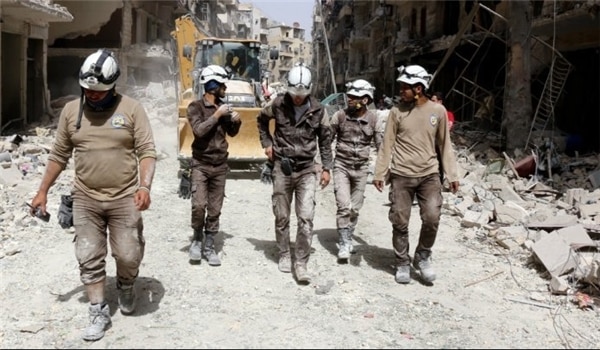 Tahrir al-Sham al-Hay’at (the Levant Liberation Board or the Al-Nusra Front) and the pro-militant White Helmets equipped 120 missiles with chemical warheads in cooperation with western experts to launch false-flag chemical attack in the demilitarized zone to later accuse the Syrian Army of the incident.

The Arabic-language website of Sputnik quoted local sources in Idlib province as saying on Thursday that Tahrir al-Sham and Turkistani terrorist groups have mounted chemical warheads on 120 missiles in one of the former’s strongholds in Sahl al-Rouj region in Western Idlib.

They added that the missiles had been transferred from one of Tahrir al-Sham’s arms caches to their stronghold in Sahl al-Rouj on 5 ambulance vehicles last Monday, noting that the White Helmets have also transferred special equipment from Khan Sheikhoun to the region.

The sources said that Belgian chemical experts collaborated in equipment of missiles with chemical materials, adding that they also supervised transfer of 8 chlorine gas capsules from one of Tahrir al-Sham positions in the town of al-Dana in Northern Idlib to the base.

According to the report, the missiles equipped with chemical warheads were delivered to Jeish al-Izza and Horras al-Din terrorists in Northern Hama and the regions occupied by Ansar al-Touhid in Sahl al-Ghab and Turkistani party in Northeastern Lattakia.

Relevant reports said last Sunday that the pro-militant White Helmets Organization in collaboration with the Western spy agencies were planning to carry out a fake chemical attack in Hama and Aleppo to later accuse the Syrian Army of the incident and annul the Turkish-Russian agreement.

The Arabic-language al-Mayadeen news channel quoted a local source in Aleppo as saying that the White Helmets have transferred a number of barrels containing toxic materials from their bases in Idlib to Northern Hama.

He added that the terrorists are plotting to launch a new false-flag chemical attack in cooperation with the western intelligence agents, noting that the scenario is due to be implemented in the demilitarized zone in Northern Hama and Aleppo where Jeish al-Izza terrorists are stationed.