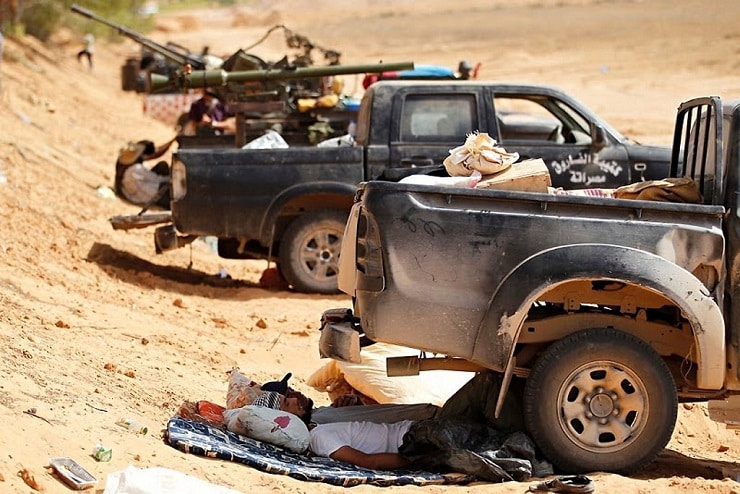 [ Editor’s Note: The LNA shot down a GNA plane today, flying in from Misrata, so we have had our first plane shoot down, and an indication that the LNA had forces west of Tripoli with the Misrata militia base in its rear, an aggressive and dangerous position.

We have had reports today of Tripoli forces abandoning immigrant detention facilities, as they were running out of food and water with no where to go. They are going to suffer the brunt of the current fighting via neglect.

The strong ones are being shanghaied into the military as heavy laborers in exchange for food and cigarettes. Things are worse for the women and children.

We also learned today that General Haftar’s move up from the south, after splitting the alliance between the two major tribes there, also brought the southern oilfields back online. But a question remains as to who will get the money from it, as all export income goes into the Libyan national bank, unless Haftar has found a way to circumvent that.

Smart money is saying that his forces cannot carry on a long siege, which I don’t agree with. It depends on how much and how intense the fighting is and the numbers of KIAs and casualties. That is what kills morale, and quickly. The issue is still in doubt… JD ] 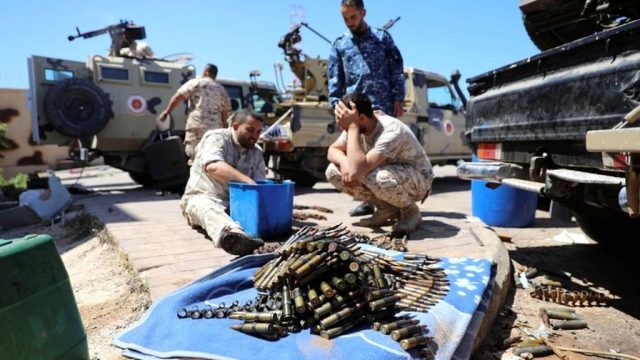 It appears now that the Benghazi-based Libyan National Army’s (LNA) General Khalifa Haftar wants to negotiate the final settlement with the Tripoli-based Government of National Accord’s(GNA)Al Serraj government over who will rule over Libya and its oil and gas reserves, after he has taken Tripoli.

All diplomatic attempts to derail Haftar’s advance have failed. The UN-backed GNA head Fayez Sarrj had offered to meet with Hafter, but he refused. UN chief AntónioGuterres’attempts to broker a ceasefire failed, and he left Libya Friday.

The UN Security Council says it will hold accountable those responsible for the current escalation, which would be Haftar. I cannot imagine how it plans to do that, when it has never been able to do so in the past when the fighting was more intense. The UN is still attempting to mediate, but an array of foreign backers of each side will also have influence over any resolution.

Who thought the Libyan civil war would last this long?

Veterans Today has followed the Libyan conflict closelysince the civil war that removed Gaddafi. When fighting was raging, we were covering the story hour by hour, fortunate to have had sources on the ground from the Libyan expat community who had returned to help overthrow Gaddafi.

Our key source and his team were present when Gaddafi was captured just outside Sirte, but then quickly left, knowing in advance that a bloody struggle for power over who would control Libya’s oil wealth would ensure, and wanted no part of it.

To avoid the impending battle for Tripoli during that war, where casualties were being estimated at 100,000, VT, without being asked to do so, successfully negotiated a safe exit for Gaddafi and his family to an African country to hopefully avoid that slaughter.

Gaddafi turned the offer down. And to everyone’s surprise, Tripoli fell in a day, the result of a carefully laid and executed plan that not only saved countless lives and injuries, but the destruction of the city.

Looking through the fog of war

I have held off writing this Libya article, due to some major loose ends with the story. The biggest one was how Haftar, with his base in Benghazi, was maintaining logistical supply lines for advancing on Tripoli from the south and west.

General Haftar’s forces advanced from the south after having taken Sabha in the southern oil fields, and thenUbari to the west to protect his left flank. His LAN fighters then moved north to take Garyan on Saturday April 6.

Tripoli’s GNA reported a counter attack by its forces, inflicting major losses on the LNA advance. Despite this claim,Haftar’s forces have actually closed on Tripoli by taking its non-operational international airport south of the city.

If Haftar had 155 howitzers, he could be shelling the city today, but I have seen no photos of any moving columns showing artillery being moved. There are reports that he has wanted to take the city with as little fighting and damage as possible, a hard thing to wish for.

All we have seen are columns of “technicals” with their heavy machine guns mounted, and lots of them. We see no columns of supply trucks following them to provide the ammunition and logistics needed for assaulting Tripoli. This could be Haftar’s undoing if Tripoli puts up a stiff defense, which I suspect it would.

How can General Haftar logistically supply a full assault on Tripoli?

I initially had to decipher how Hafter’s forces had proceeded from a southern approach with running a gauntlet of IEDs and TOW ambushes cutting it to shreds. The answer lays in the shifting allegiances of the local tribes in the area.

The GNA had earlier pulled a political coup in getting the long feuding (over respective shares of the southern oil wealth) Tebu and Tuareg tribes into the GNA coalition, where these tribal soldiers became an important part of the GNA military forces guarding Tripoli from the south.

What I learned was that Haftar had managed to split this coalition, I suspect by offering one of the tribes a bigger cut of the oil wealth ifhe could take over Tripoli. Buying off tribal leaders is an old colonial tactic, used for hundreds of years.

So we see Haftar has been preparing this move on Tripoli for some time, even going to the effort to clear the southern Libya regions of ISIS, Al-Qaeda, foreign operators, and even smugglers so he could concentrate his forces for the final move on Tripoli.

Who are the behind the scenes players on Libya’s future?

Now that Haftar has the international airport, despite its being non-operational for civilian traffic, it can receive supply planes from Tripoli. But the question is what major powers does Haftar have behind him to provide realistic logistics muscle to support a multi-pronged attack?

On the surface he has Egypt, the UAE, and tacit support, politically and military, from Russia. The GNA support comes from the UN, some Western countries, Turkey and Qatar, with its military defense depending on the Misrata militias, famous for their fighting Gaddafi.

The Pentagon announced on Sunday that the US contingent on the ground was “temporarily” withdrawing due to the current hostilities. But will the US really be gone?That requires digging into Mr. Hafter’s past, and carefully.

Somehow, missed for years now, the mainstream press has never reported that General Haftar is an American citizen, and that he had once lived in the US for many years.

In his earlier career, when he had run into some serious trouble by being captured in the Libya-Chad war in Africa, a US organization eventually extracted and took him under its wing. Some analysts feel that this relationship still exists, which might explain how Haftar has managed this two-front advance with mysterious supply lines.

There is a corporate media ban on discussing Haftar’s past, but Wikipedia found a way of getting around it with its extensive biography of Haftar’s military career.The Wiki people say he worked near Langley, Virginia, one exit off the Washington beltway. It has three letters on it. The first one is C.

The absence of visible preparations for a contested long assault on Tripoli indicates that Haftar is trying force a settlement on the GNA. He is holding the most cards, with control over the oil and gas infrastructure. He may be gambling that the man with the biggest pocketbook will eventually win the political battle.

But that could change if hard fighting ensues and his troops sustain major losses, which is always a morale killer for those fighting for money, as dead men don’t get to enjoy theirs.

The oil market is watching this situation carefully, as taking the Libyan oil off the market at this time would strengthen OPEC’s hand in the cutbacks it has made to move oil prices up. On the other hand, the GNA government controls both the national oil company and the central bank where all oil export revenues flow, so Tripoli is still holding some important cards.

A negotiated settlement would be better for both sides and the Libyan people, but is that what the foreign backers of both sides want? Are the Libyan people and their respective political parties being played as pawns on the grand chessboard, just to move oil markets in a predictable manner by which some can profit? I would say there is a good chance of that.