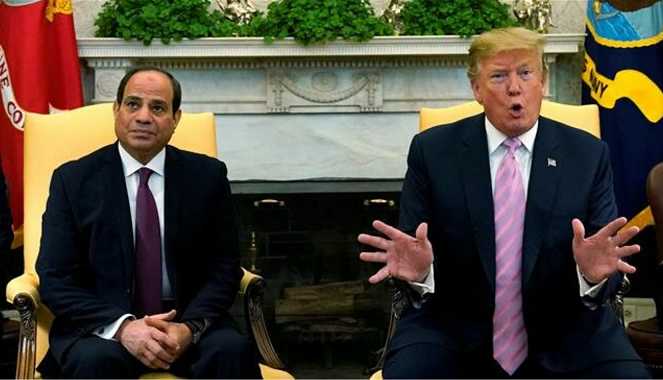 [ Editor’s Note: Egypt’s pulling out of the US anti-Iran Arab NATO basically kills the deal, as only Egypt had the trained manpower to be the anchor of such a military alliance. The others have some well trained special opps, but use third world mercenaries for any dangerous military work.

Yes, I have said this before, the Gulf State militaries are filled with “paycheck warriors” who prance around in a uniform to give them some social status, but have zero interest in ever being in a combat situation.

These are the kinds of people who head to the airport to get out when things get bad. And if they are on the CIA payroll they generally have a soft landing waiting for them. Egypt has a large and professionally trained military, but it is for Egypt’s use only it seems. It has nothing to fear from Iran, as they are both fighting terrorism.

Sisi, who I am not a fan of, was smart enough to know he would be playing third fiddle, after the US and Israel in the Arab NATO, with those two wanting Egyptian troops to be the prime cannon fodder in a war with Iran.

The endless banging the drum about Iran’s offensive plans in the Mideast is silly. Like Russia, Iran wants to do business, which will be much more beneficial than copying the Western former colonialist nations current foreign policy.

They continue to practice their neo-colonialist aggression by fomenting chaos everywhere that they can to take advantage of targeted countries economically. They are small men, and one woman, in high positions that are legends in their own minds, with Trump at the top of that heap. God save us from them all… Jim W. Dean ]

Egypt has reportedly turned its back on a US-led initiative to establish a NATO-style alliance of Arab countries primarily aimed at countering Iran out of concerns that such a coalition could increase tensions with the Islamic Republic, among other reasons.

Four sources familiar with the matter told Reuters on Thursday that Cairo had informed the US and the members of what is to be called the Middle East Strategic Alliance (MESA) of the withdrawal plan ahead of their Sunday’s meeting in the Saudi capital, Riyadh.

One of the sources, speaking on condition of anonymity, said that Egypt had not sent a delegation to the Riyadh event.

An Arab source stressed that Egypt had pulled out of the so-called “Arab NATO” because of its doubts about the seriousness of the proposal as well as the danger that such an Arab front would increase tensions with Tehran.

Other reasons were uncertainty about whether US President Donald Trump will win a second term in 2020 and whether his successor may scrap the initiative to form an anti-Iran alliance, the Arab source added.

Meanwhile, two other sources emphasized that the remaining MESA members were moving ahead with the initiative and would press Egypt diplomatically to revoke its withdrawal from the anti-Iran group. “We all want them back,” said one of the sources.

The Arab source, however, noted that Egypt could not be convinced to return to the so-called “Arab NATO,” which is comprised of Jordan and six Persian Gulf Arab countries, including Saudi Arabia, the United Arab Emirates, Bahrain, Kuwait, Oman and Qatar.

Egyptian officials have not yet commented on the report.

The alliance was first proposed by Saudi Arabia back in 2017 in a bid to counter Iran as well as Russia and China, according to a classified White House document reviewed by Reuters last year.

It has, however, faced several obstacles such as a diplomatic standoff between Qatar and a Saudi-led quartet of countries and the fallout of the state-sponsored killing of dissident Saudi journalist Jamal Khashoggi.

The problems have delayed a summit in the United States, which would feature the signing of a preliminary accord on the anti-Iran alliance.

The report about Cairo’s withdrawal plan came following a meeting between Egyptian President Abdel Fattah el-Sisi and Trump in Washington. Before the meeting, Trump had said he would exchange views with Sisi on security issues, but it was not clear whether they discussed the MESA issue.

The US and its allies in the Persian Gulf view regional powerhouse Iran as a common “threat.” They constantly accuse the Islamic Republic of “regional interference,” a claim Tehran vehemently rejects.

Trump – who came to office in early 2017 with a highly belligerent anti-Iran agenda – has been pressing its Arab allies to act on the Saudi initiative and move to form the NATO-like military alliance.

In parallel, the US president has also been encouraging the Arabs to step up their attempts towards normalization with the regime in Israel in favor of a coalition against Iran.

In February, a controversial US-organized summit in Warsaw, Poland, brought together Israeli Prime Minister Benjamin Netanyahu and representatives from a number of Arab states, including Oman, Morocco, Saudi Arabia, the United Arab Emirates, Bahrain, Qatar, Jordan, Egypt, Tunisia and Kuwait, among other participants.

On the sidelines of that event, Netanyahu said the Arab countries participating in the Warsaw forum were “sitting down together with Israel in order to advance the common interest of war with Iran.”

Tehran has also repeatedly warned the Persian Gulf littoral states against the US’s divisive policies in the Middle East, saying the planned Arab alliance would merely be a tool for the US to fuel tensions in the region and advance its own agenda there.