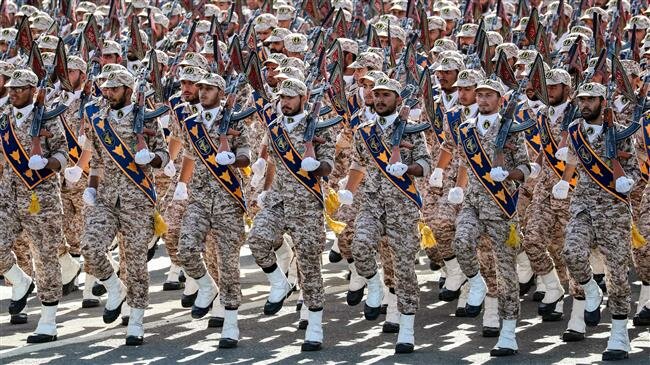 [ Editor’s Note: I don’t get to do many of these IRNA interviews but I like them, as they publish in English and Farsi, so it is a rare opportunity to reach a non-English speaking Iranian audience.

The Trump announcement to designate Iran’s Republican Guard as an aider and abettor of terrorism was considered a cheap shot by many inside the US security community, who know how much damage the IRGC has done to ISIS at a fraction of the cost of the US campaign.

The US-NATO aiding and abetting of proxy terrorism in Iraq, Syria, and Afghanistan is known by anyone that wants to. You can’t even count the articles published on it. VT alone has dozens, and no one with standing has ever challenged us on them.

The Trump charge was timed perfectly to help bump Bibi to victory in the Israeli election, with a 36 to 35 win over General Bennie Gantz’s coalition. Netanyahu has always openly campaigned on how he can get anything he wants out of the US as a major vote getter.

Americans don’t suffer much humiliation over this because major corporate media will not touch the story with a ten-foot pole, despite its being published in Israel. Did Trump interfere in the Israeli election? You betcha, he did.

So now we have this Butch and Sundance tag-team duo to wreak havoc throughout the Mideast, for God knows how long. Bibi will turn all his guns onto the Israeli prosecutors in an attempt to save himself from his pending prosecutions … JD ]

‘This is especially the case when false flag attacks are used as a cover for launching an attack, but where politically it is deemed beneficial to look like a retaliatory strike,’ Jim W. Dean said in an exclusive interview with IRNA responding a question on the consequences Iran’s retaliation to designate US army as terror organization.

In retaliation for US anti-Iran act, Supreme Council of National Security introduced US government as sponsor of terrorism and US Central Command called CENTCOM as among the terrorist groups.

It also described the baseless measure as a major threat to the international and regional peace and security, considering it a vivid violation of international laws and UN Charter.

Dean added ‘I don’t see any consequences right away. What this designation does is to create what we call a “hair trigger” climate, where response decisions can be made before all the facts of an event have been closely analyzed.’

‘The best punishment for false flag perpetrators is to expose what they did publicly in detail, and let them face their own people knowing what they did,’ he said urging Iran to be more cautious in giving any response.

‘Iran has a good record at not being baited to over-respond to an incident,’ he reiterated.

Dean went on to say ‘the US won’t benefit from any new designation. Trump keeps throwing these things out to grab media attention that he is a “doer”, a tough guy, to compensate for everyone knowing he faked a “bone spur” deferment for the Vietnam War.’

‘As bone spurs are permanent, there have been calls for Trump to show he still has one, but they have been ignored,’ he added.

If the designation is used to allow things, for example, like drone strikes against IRGC forces or key people, simply on the grounds that they are members of a terrorist organization, then I think Iran would respond,’ Dean said referring to the US terrorist designation as just a theatrical move which could change quickly.

For much of the interview the American analyst said ‘Unfortunately that might be just what the NeoCons in the US defense community would want, to have American troops killed, so a large retaliation attack could be launched so Trump could look like the war commander he wishes he was.’

‘Such events could be orchestrated simply for his reelection purposes, and this is known inside the Pentagon, as our Veterans Today sources tell us it has been discussed there,’ he stressed.

Elaborating on Pentagon’s stance as regard US administration’s decision against IRGC forces,’ Dead said ‘the pro war crowd in the Trump NeoCon White House is not loved by everyone in the Pentagon.’

He added ‘there are honorable people there that don’t want to see American servicemen abused by being sent into harm’s war due to a fabricated incident, which could be done by Israel for example, so the Pentagon and CIA can say they know nothing about it, and be telling the truth.’

Underlining and confirming the crimes committed by US administration, he said ‘this is a sad time when some of the worst criminals among us have arisen to high political positions, where they can do horrendous things behind a government immunity shield.’

He noted ‘this a dangerous situation that has many honorable people in military and intelligence agencies worried about penetration of both their own organizations or their political structures to get a war started by those looking to profit from it.’

‘Another misguided election-eve gift to Netanyahu. Another dangerous US misadventure in the region,’ Mohammad Javad Zarif tweeted on Monday.

The United States has been plotting anti-Iran measures for forty years now, but the Iranian nation has stood against these measures and will strongly support the IRGC forces, he said.