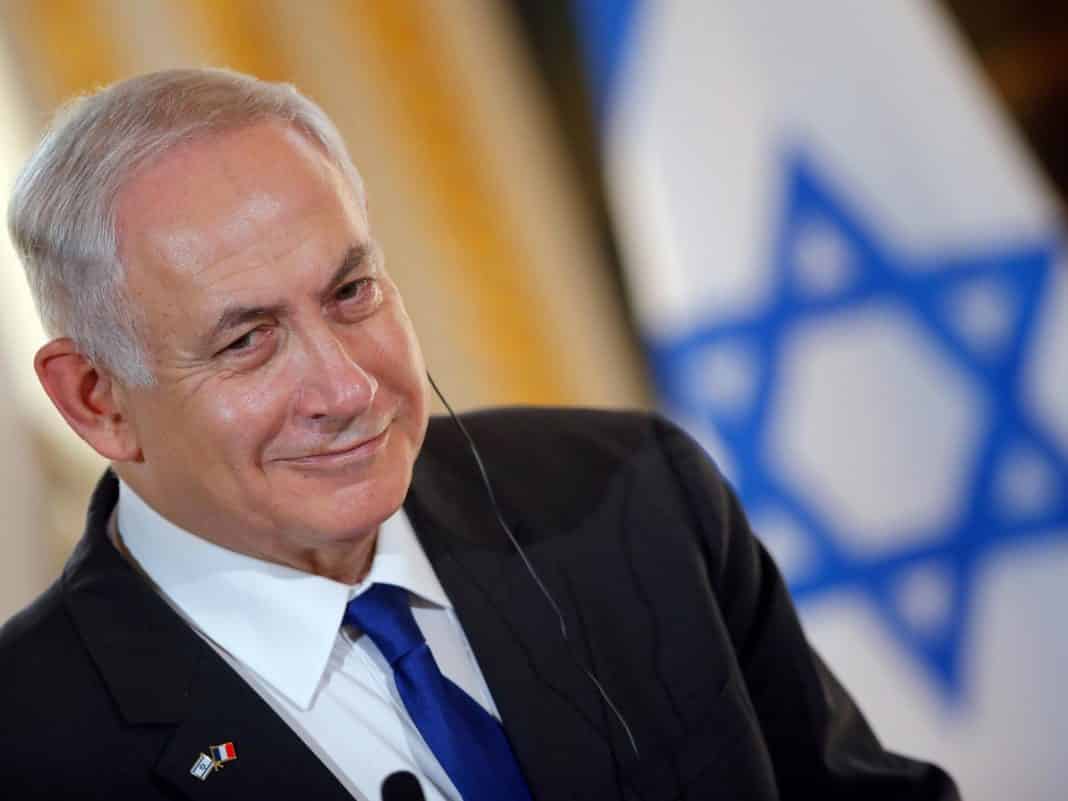 When a new parliament in the “Jewish State” is elected on 9 April 2019, Palestine will face a new nightmare of unknown proportions. Right, right, right that’s the motto, because Netanyahu kept his election campaign running in alliance with European right-wing populists and right-wing extremist allies to maintain power and has a good chance of a fifth term in office – as head of government since 2009.

It is an election campaign of fear – against Iran, Palestinians, Islamist terror, Hamas, Hezbollah, so-called “infiltrants”, left-wing media. All this creates quotas. It is bad enough that the majority of Jewish citizens feel attracted by Bibi’s slogans and the actions contrary to international law, which obviously correspond to their view of the world.

Peace was and is not their goal and does not fit into the invented threat situation, which is only crowned with the slogan “security”. This means: Eternal occupation and settlement, as well as expulsion and transfer. 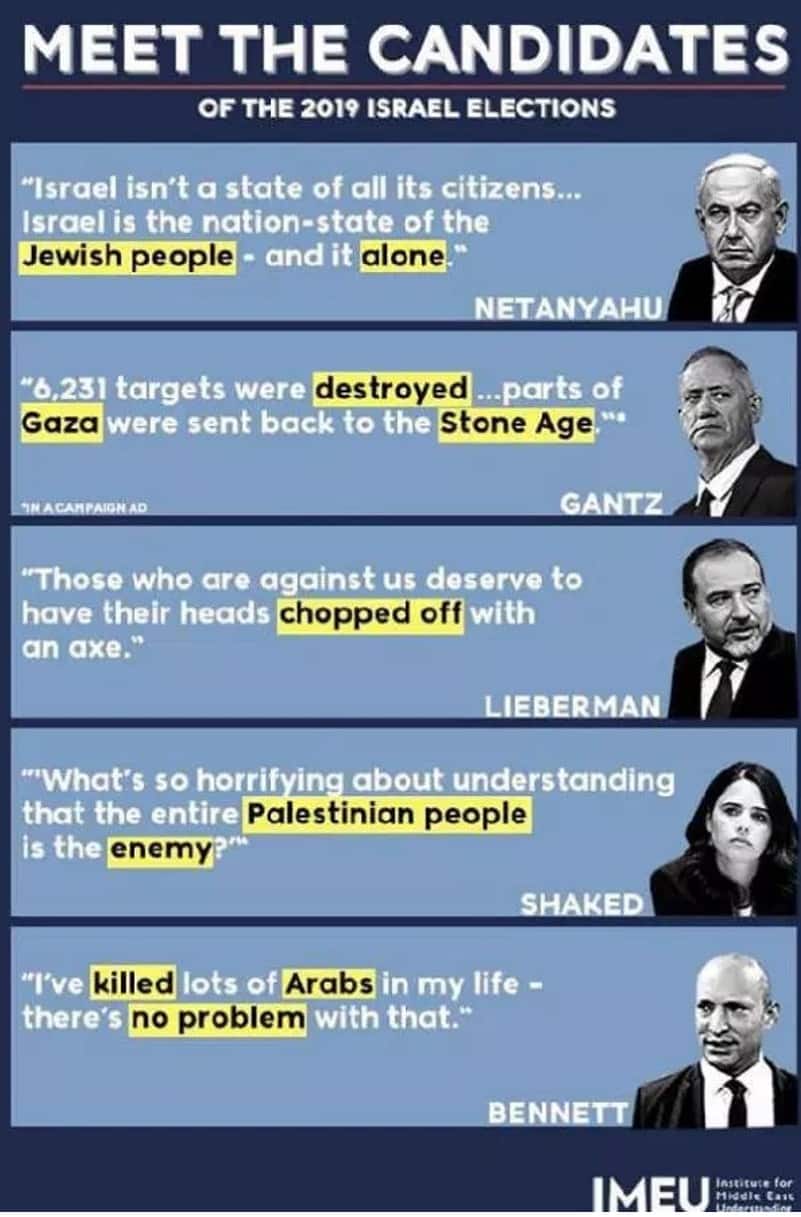 Meanwhile even the Awoda, the Labour Party under Avi Gabbay, no longer considers the evacuation of Jewish settlements in occupied Palestine necessary and thus does not differ from any other right-wing party. (1) A frightening right-wing heaviness between Moshe Feiglin’s Zehut party, which wants to legalize marijuana and advocates the construction of the “third Jewish temple” on Haram al-Sharif and the transfer of Palestinians. (2)

This “New Right”, which was not afraid to also nominate candidates who openly claimed to be supporters of the racist rabbi Kahane. His party was banned after murderous acts of terrorism. And only through the Supreme Court was a candidate prevented from rushing with open racist slogans and not really setting himself apart from other “New Right” candidates. All in all an illustrious society between the ultra-Orthodox Shas Party, the United Torah Judaism, Kulanu and Yisrael Beitenu of former War Minister Avigdor Lieberman.

Questioning the right to exist on stolen land

So when will the so-called right of existence of the “Jewish State” on stolen and occupied Palestinian land finally be questioned? After all, the EU and also the German Federal Government are aware of this policy, which is contrary to international law and has been criticized timidly, but without drawing the necessary consequences from it. One cannot ask one question often enough and again and again: Why?

The “Jewish State” and its globally active Sayanim (Israel lobbyists) have managed to build up an eternal victim status of which every other victim group can only dream. No, even if the Holocaust was an unimaginable German Nazi hate crime, it does not justify all means. No state has the right, not even a “Jewish” one, to occupy a country and a people as a reaction to injustice suffered by others.

Therefore, after the election Germany should ask itself whether it is still justifiable – and again and again with reference to the “special” relationship – to support a right-wing radical “Jewish state”. The “German value policy” must finally be implemented, also and especially with regard to the “Jewish State” and our “special” relations. When again and again there is talk of “Christian-Jewish values”, then these are still based only on the support of a state which neither observes international law nor human rights, but shamelessly breaks them in the certainty of being rewarded with impunity.

Here a rethinking is necessary, no matter which alliance will finally win, because for Palestine, which has been occupied for decades, something can only change if one threatens the occupying forces emphatically with consequences and these are then also swiftly implemented. Sanctions would be a helpful and long overdue step.

Election forecasts are like weather forecasts, more than incalculable. However, we can assume that after the elections, either way, things will get worse than before.

Inciting as an election strategy

The Netanyahu regime’s policy nightmare has managed to frustrate Palestinian-Israeli citizens to such an extent that their turnout is likely to fall in 2019, as opposed to 2015. He is making his own media policy. He presents the corruption accusations against him as a conspiracy, accuses parts of the press of taking part in a witch hunt against him, broadcasts from his own Likud TV studio and uses social bots as election helpers. Inciting as election strategy. (3)(4)

Thanks to the right-wing extremist polemics of the Netanyahu regime to expand the Palestinian-Arab parties to a dangerous size that endangers the security of the “Jewish State”, Hasbara, who is accompanied by scientists, managed to break up the so-called “United List”, the union of four different parties, from secular nationalistic to strictly religious, a few weeks ago after disputes over claims to power. What better thing could happen to Israel, wrote Haaretz, than to build a deadly enmity after the hostility between the collaborating Abbas Palestinian Authority and Hamas ruling in Gaza.

This kind of wedge-driving rift politics is one of the main activities of the Netanyahu regime – masterfully pursued. According to Zionist calculations, it is only by supposedly weakening the opponents that one gains strength.

So if 15 percent of the Palestinian citizens of the “Jewish State”, Muslims and Christians as descendants of those expelled by the Nakba, remain absent from the elections, then the right-wing extremist parties will again be closer to one goal, namely autocracy by eliminating the Palestinian voters. While in recent years a large number of Palestinian-Israeli voters voted for the Palestinian parties in elections, the “United List” could still become the third-strongest faction in 2015 – a grandiose achievement. If, however, this time, this faction takes part in two separate groups, weakened by split votes, then the intrigue has been successful.

Bibi Netanyahu has managed to use the slogan “Bibi or Tibi” to build up an image of the enemy against Ahmad Tibi, the best-known Palestinian Knesset deputy, which lacks any foundation.

Bibi accuses his opponent Gantz of seeking an alliance with Palestinian parties, which Benny Gantz categorically ruled out. After all, Gantz, the former Israeli chief of general staff, is a “Bibi light”. All Netanyahu’s warnings against the Gantz “Blue and White” alliance (Hebrew “Kachol Lavan”) and against the left, which he denounces as anti-state, which betray the interests of the nation, are ideological lies he spreads. Not only does Gantz and his alliance reject any coalition with Palestinian parties, but a so-called “two-state solution” is not mentioned in the election program, but he also wants to actively promote the expansion of the settlement building in violation of international law and the claim to the eternally undivided capital of the “Jewish State”.

All on the right-wing patriotic-Zionist wave, which alone guarantees Jewish voters. After all, 62.5 percent of Israel’s Jewish citizens would support a tougher action by Netanyahu against Gaza, which has been on the ground for years. So it is not surprising that this murderous Prime Minister Netanyahu, in an interview with the right-wing extremist combat newspaper “Israel Hayom” of the US Jewish gambler king Adelson, boasts that he made a “wise decision” with the murder of 300 Palestinians. (5)

These were murdered by the “most moral” Jewish “defense soldiers” and snipers of the IDF at the fence to the occupied concentration camp Gaza. His regime has only one goal: deterrence; by cutting off the link between Gaza, which was blocked in violation of international law, and the occupied West Bank, the “Jewish State” succeeded in destroying all unity and strengthening the Jewish settlements once again. His campaign promise that he would not remove any settler from the illegally occupied settlements, “not uproot any Jews” should also be understood in this way.

No, the Zionist regime has only practiced uprooting against the Palestinians since the founding of the state. Netanyahu would also ensure that “we control the area west of the Jordan”. Also the final annexation of the Syrian Golan Heights, the move of the US embassy to Jerusalem, all a violation of international law. It seems, however, as if all this has been agreed and is to be seen in harmony with Trumps and Kushner’s “ultimate” peace plan, which he provocatively wants to present on the 71st anniversary of the Nakba, the catastrophe of the Palestinian people, and thus announces the “next phase” of Palestinian lawlessness. Trump, the “best friend” Netanyahu and the Zionists have ever had, will not let himself be tainted and will certainly have a nightmare of more unfulfilled surprises in store.

Apartheid state of the worst kind

I wonder, however, why Russia’s President Putin Bibi also gave Bibi an election gift and handed him the remains of an IDF soldier who had been missing for 37 years. So Netanyahu could still boast of his contacts to important state leaders. It seems reasonable to suspect that Trump used Netanyahu as a messenger of secret messages between him and Putin.

Despite an 18 percent higher poverty rate than in other industrialized countries, despite the great impoverishment of old pensioners and Holocaust survivors and despite great unpopularity in large sections of the population, Netanyahu has managed to present a successful economic balance sheet and to score points with fascist right-wing extremist slogans and allies, entirely in keeping with the Zionist state reason for the final solution to the Judaization of Palestine.

The “Jewish State” is an undemocratic state with its national law “only for Jews” – an apartheid state of the worst kind. (6) In this sense, my hopeless outlook on the elections on April 9 in the “Jewish State”, my nightmare – when murderous Zionist dreams come true. Until after the elections, right before the elections.

ABOUT AUTHOR: Evelyn Hecht-Galinski, daughter of Heinz Galinski, former Chairman of the Central Council of Jews in Germany, is a publicist and author. She regularly writes her comments for the NRhZ on the “Hochblauen”, the 1165 m high “local mountain” in Baden, where she lives with her husband Benjamin Hecht. Her book “The Eleventh Commandment: Israel is allowed to do everything”. Published by tz-Verlag, ISBN 978-3940456-51-9 (print), price 17,89 Euro. On 28 September 2014 she was awarded the fourth “Cologne Charlemagne Prize for Committed Literature and Journalism” by the NRhZ.  Visit her site at SichtVomHochblauen.de