On April 15, 2019, a fire broke out at Notre Dame Cathedral. The fire department sent 400 firemen to put out the blaze.  The horrific blaze raged for hours. First, the crowd was silent as they watched the Heart of Paris burn and eventually they began to sing hymns. The police finally ordered the crowd to leave for fear of the smoke.

The crowds numbered more than 4000 people as they gathered the day after the cathedral burned.  Police put tape blocking access to even get close to the Cathedral but VT’s Paris bureau was able to access areas where the TV stations were filming and holding interviews. The crowds who were able to come near the Notre Dame were very respectful; Three nearby metro stations were closed because of the large crowds.

On the day after the fire, tourists and Parisians were taking photos with their smartphones.

It is amazing that the outside looks undamaged other than the spire is missing.  Some valuable works were taken out for safety.

One architect, who was being interviewed, said that firemen were working  24 hours a day to access the damage to see if the building is safe; He picked up ashes and said they were from the previous evening.

Luke Shrago, from France 24 TV, told me that the station broadcasts in English, French, and Spanish. He also informed me that there is a stone vault in the building to prevent fires from spreading, hopefully, to halt more damage, but the spire was built after the church and was eventually in flames and finally collapsed. From the outside of the cathedral, at ground level, the missing spire is what is most obvious.

Most believed it was not arson that caused the fire but the cause is still not known.

There is an ongoing investigation. 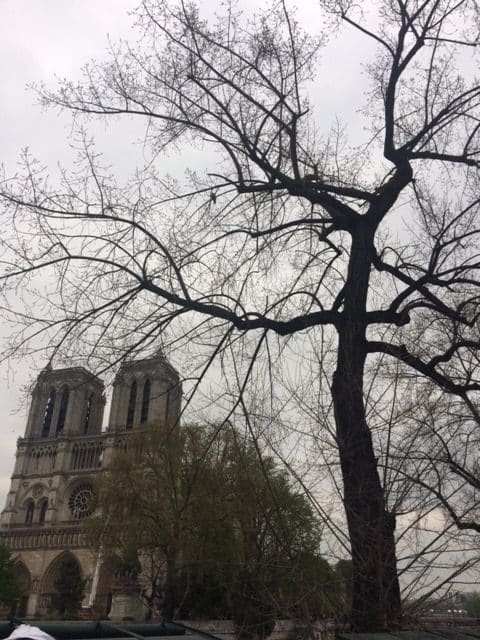