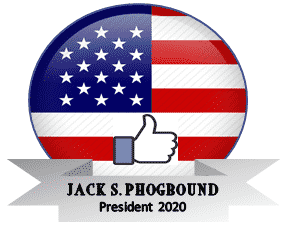 Some Necessary Satire for Times of Insanity

My fellow Americans.  As you know, it is once again time for America to choose a President, only nobody gets to vote in a general election for almost another two years.  The reason everybody starts running so early is because there is a lot of money to be made raising campaign contributions and spending it with the media, and the real purpose of Presidential elections is be a gold mine for the media.

So without further ado, I officially announce my candidacy for President of the United States, and Dogpatch.

I feel right at home with the announced field of candidates which is growing every day, most of whom nobody ever heard of before, since as a group they are about as greedy, corrupt, and/or incompetent as you can get. Otherwise they would not be getting so much free media coverage. As far as male candidates, an important qualification for office is that the candidate must have remained at least three feet away from all women during his entire life, with the possible exception of the day he was born.

I hereby announce my platform for what I hope to accomplish if elected. Segment One of the platform is contained below, with other segments to follow:

Just as the last time I ran, the most important issue today is the fact that the US Treasury is being systematically robbed, and the National Debt continues to rise astronomically. Naturally nobody else running for President except me, ever mentions one single word out of their lying mouths about the National Debt or even such simple phrases as “government waste”.

So where does the money go?

The fat cats in Washington, to include a coalition of most of the members of Congress except for the ones who never learned how to count in grade school, plus the over 3 million federal employees, plus the media that reports the news to the public except when they get paid big bucks not to, use a formula that was originally used by Boss Tweed when he and his friends were robbing the New York City Treasury back in the 1860’s and 70’s.  His formula was simple.  Provide goods and services to the taxpayers in an amount equal to or slightly greater than the amount that the taxpayers pay into the treasury, and steal most or all of the money that the government (which in his case was the government of New York City) could borrow, and leave the debt that the government owes for the chump taxpayers to worry about.

“It’s hard not to admire the skill behind Tweed’s system … The Tweed ring at its height was an engineering marvel, strong and solid, strategically deployed to control key power points: the courts, the legislature, the treasury and the ballot box. Its frauds had a grandeur of scale and an elegance of structure: money-laundering, profit sharing and organization.”

This formula was re-introduced by George H. W. Bush, and the Savings and Loan scandal was the first indication of this formula at work, and it continues to work to this day. There was a short interlude when President Clinton paid down some of the debt, so naturally he was impeached but not convicted.  But the impeachment process did put Treasury Looting back on track.  So we have continuous unnecessary wars in faraway places such as Iraq and Afghanistan, because robbing the taxpayers overseas is much easier than here at home.

One thing you must remember is that if you divide up a trillion dollars a thousand ways, it is a billion each, or a million ways, it is a million each.  When Bush I took office, the National Debt was $2.6 Trillion, and now it is $22 Trillion, which leaves $20 Trillion to divide up. (*2)

When patriarch Bush died, it was reported as the death of a great American, with all kinds of pomp and ceremony, and not one single word of criticism was uttered anywhere in the media, which shows the awesome power of the treasury looting machine, since he was undoubtedly and by far the greatest thief in the history of the world.

So you might ask how I would stop treasury looting if I were elected?

Step 1. Get rid of half the bureaucrats working for the Federal Government. At the present time there are approximately 2 million federal bureaucrats, plus 1.3 million members of the Armed Forces, plus around 600,000 post office employees. There are way too many deadbeats feeding at the government hog trough.  If modern business practices were employed, similar to those used by corporations such as Apple, or General Motors, you could cut this number in half, so that you don’t have bureaucrats sitting around watching porn movies all day and ducking phone calls from the public, at the expense of the taxpayers. I would put Carly Fiorina in charge of this effort.

Step 2.  Learn how to count the Defense Budget.  The Defense budget needs to be greatly reduced.  But first you must make sure you can count the money that is spent. (*3).

If you go back in history, President Eisenhower greatly reduced the Defense Budget, because he knew from his experience as a General what was needed to defend the Country, and what bullshit that military contractors would put out to rob the taxpayers.

He warned against the military-industrial complex (which includes military officers and contractors who supply the military) in his farewell speech to the nation, but since that time America has been continually robbed because the public failed to heed his warning. (*4)

Presidents of his character and wisdom are few and far between in our history.

I estimate that between thirty and forty percent of our Defense Budget could be cut without reducing our military strength.

And the Army would have the same capability that it does now, and possibly be a more effective fighting force, since enlisted men do the fighting and officers stay in the rear whenever possible, and the more officers you have in the rear, the more likely there will be confusion at the front.

So, this is segment one of three segments of my platform, and I ask for your support. Segment two will contain my plan to increase government revenue with the goal of completely eliminating taxes and paying off the national debt, plus my plan to restore the Constitution and ending mass shootings and terrorism.  If you don’t want to support me, you are welcome to ask the other candidates their position on the issues I raise.  You will find most of the issues I raise are taboo, and nobody in the press and none of the candidates will say a word about them, because they have a script to follow when they debate, and the questions the press ask them are carefully controlled.  After all, the real purpose of elections is to be a gold mine for the media, and the last thing anybody wants is small and good government.

Below are links that are referred to in all of the segments of my platform.

(*1)  Here is a link to a chart showing the projected growth of the National Debt:

(*2) Here is a link to a chart which shows the National Debt by year:

(*3).This link shows a recent effort at an audit that failed to count defense Department money:

(*4) Here is the link to President Eisenhower’s farewell address:

(*6)  Here is a link that describes the spending of US Treasury money to fund terrorism, and another link regarding the close Bush relationship with Saudi Arabian Big Shots.

(*7)  Here are some links that connect you to the long parade of Bozo screw-ups on the way towards Empire. I am sure there are links have missed.

This last link describes a US Army screw-up in Iraq that resulted in an untold number of casualties, to include many American soldiers killed or maimed by roadside bombs, plus even more casualties of innocent Iraqi citizens, and casualties continue to mount even to this day, since enough explosives were lost to make a two-pound bomb every day for a thousand years.  Also, trillions of dollars were spent to keep the war going, and nobody was court-martialed for incompetence, since the purpose of the war was to keep it going instead of winning it.

(*8)   Article regarding the history and the dangers of forcing prisoners to take drugs against their will: http://www.thegovernmentrag.com/the-loughner-precedent-and-the-spectre-of-a-purge.html#.XJehQCJKiUk