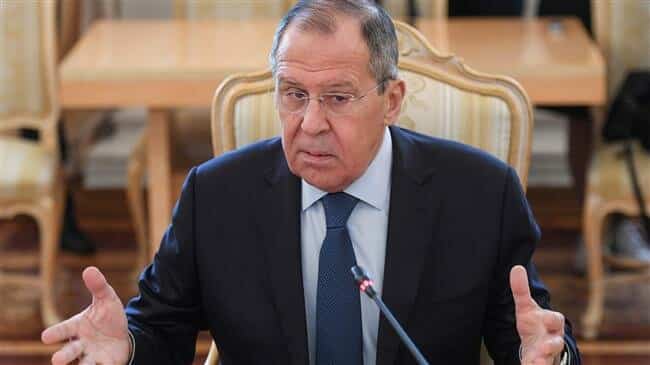 [ Editor’s Note: Lavrov was not mincing words today. By coming out so strongly he has placed Russia firmly on the side of “no Balkanizing Syria”, especially having the Deir Ezzor oil region ripped away from Syrian control to a rump new Kurdish state.

He was also paying attention to Turkey’s border concerns by stating that appropriate security mechanisms must be in place to prevent a Kurdish Syrian region becoming a safe haven for Kurdish terrorists operation in and out of Turkey.

But Lavrov left a key item out in all of this, despite the concession to Turkey’s legitimate border concerns. He did not call Turkey out to stop logistical support for the jihaddis in NE Syria, in effect giving Erdogan a free pass on ignoring Syria’s “border concerns”.

Iran has not touched this seemingly red line with Turkey either, as it has a critical need to maintain oil exports to Turkey at this time. Politics is always a never ending contest among competing interests.

While Russia continues to show a weak hand with Israel in not having been able to stop its endless bombing attacks on Syria, even in the north part of the country when Israel had earlier said it would not permit “Iranian influence” within 60kms of the Israeli border.

Mind you, this was Israel’s position when we know now Netanyahu was getting ready to take over the Golan Heights and bomb anywhere he wanted inside Syria that was reachable with glide bombs.

If Israel can do anything it wants inside Syria for any reason it wants, then I would have to ask Russia and Iran and Turkey, why not let the US do the same. I don’t think I would get a straight answer on that.

What all this means is the Astana Coalition’s endless repeating of being in support of Syrian sovereignty is only really true in terms of the Kurdish situation. This double game is not going to work well for them long term. Mark my words.

It is a lit fuse that is burning toward an explosion of undetermined size. So I would ask Mr. Lavrov, why should not Syria and Russia also be able to take over NW Syria without Turkey supplying the terrorist forces entrenched there?… Jim W. Dean ]

Russia says the legitimate Syrian government should immediately take control over the country’s northeastern region, including the East Euphrates River, which is held by US-backed Kurdish militants.

“There is a need to resolve the issue concerning the country’s northeast and the left bank of the Euphrates River in order to achieve one of the priority tasks and ensure the restoration of the legitimate government’s control over the region,” Russian Foreign Minister Sergei Lavrov said at a press conference on Wednesday.

The top Russian diplomat underlined the need to build dialog with Kurdish groups and secure the interests of Turkey “as far as security in Syria’s border areas is concerned.”

Turkey considers the YPG a terrorist organization and an extension of the outlawed Kurdistan Workers’ Party (PKK), which has been fighting for an autonomous region inside Turkey since 1984.

The United States is a key advocate of autonomy for Syrian Kurds which Damascus has roundly rejected. Many observers believe Washington plans to carve out a foothold in the region through supporting Syrian Kurds.

In February, a senior adviser to Syrian President Bashar al-Assad flatly rejected the idea of giving Syrian Kurds a measure of autonomy, saying such a move would open the door to the partition of the country.

Kurdish officials say the so-called Syrian Democratic Forces (SDF) is prepared to hold talks with Damascus about the region under its control in northeastern Syria.

The Kurdish-led authority that runs much of north and east Syria has presented a roadmap for a deal with Assad in recent meetings with Russia.

Also in February, President Assad called on SDF militants to return to the Syrian army, warning them against reliance on the United States.

PressTV-Assad: US will sell out those who put trust in it

Syria’s president has warned that the US would not protect those who depend on it.

Russia has been helping Syrian forces in their fight against foreign-backed Takfiri militants. The military assistance began in September 2015 at the official request of the Syrian government.

Foreign-backed militancy, supported by the United States and many of its Western and regional allies, erupted in Syria in 2011.

The Daesh terrorist group, which once held large swaths of land in Syria, has now been completely defeated in the Arab country and has lost almost all of its occupied territories.

Syria has now reestablished its reign over nearly its entire expanse.