Home Government Trump’s whistleblower protection agency under investigation for attacking…WHISTLEBLOWERS
Share
Twitter
Pinterest
WhatsApp
Linkedin
ReddIt
Email
Print
Tumblr
Digg
Russia Today/Moscow: In an ironic twist, the agency tasked with protecting those who blow the lid on illegal activity inside the government is ITSELF being accused of retaliating against whistleblowers – can anyone protect them from the protectors?

While Trump opened the Office of Accountability and Whistleblower Protection (OAWP) in order to watch over those reporting potential crimes inside government agencies, some government employees are saying it ended up doing exactly the opposite.

ALSO ON RT.COMNearly 100,000 Pentagon whistleblower complaints have been silenced – Lee CampThe investigation is being led by the Veterans’ Affairs Department’s Inspector General, which has fielded a flood of complaints from those who came to the OAWP for help and ended up in an even more dangerous situation.

“It’s a crooked system where literally the fox is guarding the hen house,” VA Administrative Officer Jay DeNofrio toldGovernment Executive. He says he was shocked to find that the agency seemed to be more interested in investigating him than the VA doctor he reported for putting veterans at risk by continuing to practice despite his dwindling mental capacity.

In one particularly heinous case, the chief engineer at the VA’s Northern Indiana Health Care System, Dan Martin, asked the office for backup after he reported his superiors for possible contracting violations. Martin says that instead of keeping him protected, the OAWP essentially blew the whistle on the whistleblower. They gave the people who Martin had informed on his name, and actively sabotaged an investigation by letting them know they were being secretly recorded.

“Some of them are so crooked they swallow nails and spit up corkscrews,” Martin quipped. “OAWP set me up.”

VA spokesman Curt Cashour said that things have changed, and the agency now tells claimants if the investigation they initiated has been resolved, and allows them to keep their names out of the reports which notify suspects they are being investigated. However, the agency says it will not stop “referring cases of misconduct back to facilities and program offices where the misconduct occurred,” which essentially means that calling in OAWP protection could continue to actually make matters worse for whistleblowers.

The whistleblower-protection initiative was a key piece of President Trump’s 2017 reform package for the VA, a notoriously troubled agency with a “culture famous for intimidation and reprisal. 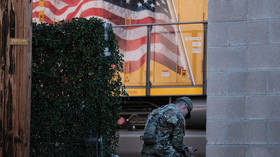 But to blow the whistle on a huge organization with a lot of power, likely drawing that power to come crashing down on your head – that takes some serious spine-age. Now, imagine the organization you’re calling out is arguably the largest, most powerful, most secretive and most violent organization on planet Earth. I’m speaking, of course, of the US Department of Defense.

Yet thousands, even tens of thousands, of people have taken that step over the past five years. (More on this in a moment.)

All the while our organized human murder machine continues its work around the world. Every day. Every hour. Never a moment of rest. Never pausing to clip their toenails or scratch their ass. Bombs dropped. Buildings blown up. People killed or imprisoned. No end in sight.

By the way, that’s the term I like to use instead of “military” – Organized Human Murder Machine.

It has a nice ring to it, doesn’t it? “Mili-tary” sounds too boring, too banal. Sounds like a super-lame couple you met at a party. “Yeah, Millie and Terry over there are accountants. If I have to hear one more joke about capital gains taxes, I’m gonna kill myself.”

Eleven months ago I covered $21 trillion of unaccounted-for adjustments at the Pentagon over the past 20 years. Don’t try to think about the number $21 trillion because you’ll pass out and hit your head on the desk. If your salary is $40,000 a year, in order to earn $21 trillion, it would take you 525 million years. (At which point you can’t even enjoy the new jet ski you just bought with all your money because you’re almost certainly a brain in a jar … though a nice embroidered jar that only the rich brains can afford.)

ALSO ON RT.COM The Pentagon failed its audit amid a $21 trillion scandal (yes, trillion) – Lee CampOver the past year there has been a little more coverage of the utterly preposterous amount of money unaccounted for at our human murder machine. The Nation magazine, Forbes and Congresswoman Alexandria Ocasio-Cortez all covered it. Then the white blood cells of the military-industrial complex kicked into action in order to destroy the “infection.” The New York Times and Vox both claimed the $21 trillion is merely the result of large-scale misdocumentation and therefore doesn’t matter at all. Of course, the idea that tens of TRILLIONS of dollars of unaccountable adjustments don’t matter and couldn’t mask any fraud, abuse or corruption is an assertion that makes Charlie Sheen’s statement that he runs on tiger blood seem downright levelheaded.

Probably the best article to date on the $21 trillion was written a few weeks ago by Matt Taibbi for Rolling Stone.

Point is, even though most of the mainstream media won’t get near this subject (or worse yet—actively attack those who do), the word is getting out: There is a giant sucking sound in the center of the Pentagon, and whatever’s down there feeds on trillions of secretive dollars, then sh*ts out incalculable death and destruction. (It’s the Death Star if officials at the Death Star spent $10,000 on a toilet seat.)

A month ago the Government Accountability Office came out with a report showing the total number of whistleblower complaints over the past five years at the Department of Defense. It’s nearly 100,000. Here’s the only part of the report that references that number:

“The Department of Defense Inspector General identified 8 substantiated violations of whistleblower confidentiality between fiscal years 2013 and 2018, representing approximately .01 percent of the 95,613 contacts handled by the Inspector General during that time…”

We are being lied into war again – Lee Camp

Sadly, the Government Accountability Office was trying to brag in that sentence. They were proudly stating, “We only breached the confidentiality of .01 percent of our 95,000 whistleblower complaints. Aren’t we heroes?!”

To try to get the 95,000 number to make a little more sense, that averages out to a whistleblower every six minutes of every weekday for five straight years. (That waiting room must be truly nuts. I bet all the good magazines were claimed years ago.)

But maybe I’m looking at this all wrong. Perhaps the number 95,613 shouldn’t be all that shocking, and I need to roll my tongue back up and store it back within my mouth. When you have $21 trillion of unaccounted-for adjustments, it means a seizure-inducing amount of money, parts, pieces, bombs, missiles, manpower and devices are flying around with no accountability – likely creating loads of fraud, which would probably create loads of whistleblowers. Hence, maybe we all should have expected this number of whistleblowers rather than being shocked.

For example, there’s the time in 2003 when the US flew $12 billion in cash to Iraq and promptly lost track of it. As the Guardian makes clear in this article, this was not an instance of hackers on a computer system stealing a bunch of ones and zeroes. This was giant pallets of cash money vanishing without a trace. In fact, it was 281 million $100 bills, weighing in at 363 tons. That’s not really the type of thing you can just smuggle away in your sweatshirt while humming “She’ll be comin’ ‘round the mountain.”

READ MORE: Trump is ‘for socialism’ … but only when it comes to funding US military industry – Tulsi Gabbard

Or here’s another example journalist David DeGraw highlights from the Government Accountability Report:

“… according to a Department of Defense official, during an initial audit, the Army found 39 Blackhawk helicopters that had not been recorded in the property system. [$819 million in value] Similarly, the Air Force identified 478 buildings and structures at 12 installations that were not in the real property systems.”

The Army lost and then found 39 helicopters.

The Air Force lost and then found 478 buildings.

How does one lose a goddamn building? Unless you just had a bad breakup with David Copperfield, there’s no explanation for losing a building. (Side note: It must suck divorcing David Copperfield. “Really, honey? You think you’re gonna take the house?? PAFOOMPF! What house?!”)

Ya see, this madness stems from the fact that the Pentagon has a standard operating procedure of simply making up numbers to fill their books – which, for normal human beings, is termed “fraud.” But in the case of the Pentagon, it’s termed, “We get to make sh*t up because … ummm… national security.”

ALSO ON RT.COMCold War is good for business: US contractors rejoice at the new Red ScareHere’s more from a 2013 Reuters article:

“Linda Woodford spent the last 15 years of her career inserting phony numbers in the Department of Defense’s accounts … but many mystery numbers remained. For those, Woodford and her colleagues were told by superiors to take “unsubstantiated change actions” – in other words, enter false numbers, commonly called “plugs,” to make the Navy’s totals match the Treasury’s.”

So let’s sum this up, shall we? The Pentagon sucks up 55% of all the discretionary tax money we pay to our government (thanks to our bought-off Congress who receive more Christmas cards from weapons contractors than they do from relatives). Those who work at the Pentagon have no idea where or how the money is spent. They make up many of the numbers resulting in tens of trillions of dollars of unaccounted-for adjustments. They lose helicopters, buildings and, in a few instances, even nuclear warheads. There is an unimaginable amount of fraud and corruption at every level and literally thousands of whistleblowers have tried to come forward every single year – one every six minutes. When they do take that incredibly brave action, over 90% of the claims are dismissed without even being investigated.

You would think, in this topsy-turvy world, if there were one organization we could trust with a trillion dollars a year of our taxpayer money, it would be the Department of Unauthorized Highly Secretive Mass Human Murder.

Lee Camp is an American stand-up comedian, writer, actor, and activist. Dubbed by Salon as the “John Oliver of Russia Today”, Camp is the host of RT America’s first comedy news show Redacted Tonight, which tackles the news agenda with a healthy dose of humor and satire. Lee’s writing credits are vast, having written for The Onion, Comedy Central and Huffington Post, as well as the acclaimed essay collections Moment of Clarity and Neither Sophisticated Nor Intelligent. Lee’s stand-up comedy has also been featured on Comedy Central,  ABC’s Good Morning America, Showtime’s The Green Room with Paul Provenza, Al-Jazeera, BBC’s Newsnight, E!, MTV, and Spike TV.

This article was originally published by Truthdig.