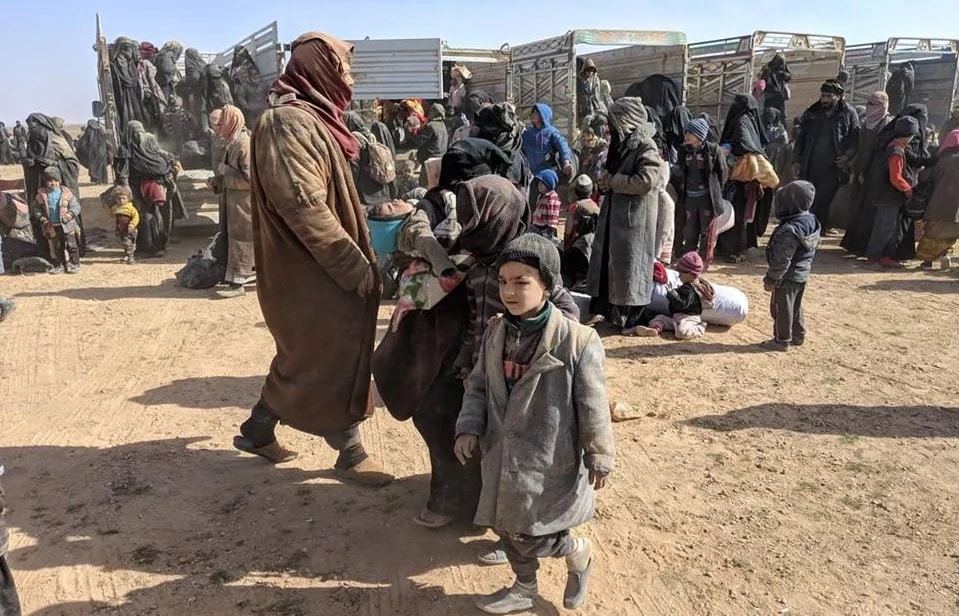 [ Editor’s Note: It was a surprise to see this up on NEO twelve hours after sending it in, as they usually have articles lined up a day or two in advance. Although NEO is great exposure for us at VT, they only post two, maybe three at the most articles a day, when we might do ten to twelve.

The topic was not a breaking news one. God only knows how long the Syrian debacle has been with us, and might be a candidate to join the Afghanistan and Iraq wars, the kind that just go on and on, almost seeming to do so by design by those profiting from them the most.

I would not even guess on how many stories Gordon and I have done on Syria, but here is one more, with others waiting in the wings. But we are in a sad point now, due to thinking that the worst was behind us, and now we can see that may not be the case.

Netanyahu is pushing the envelope and Trump will do anything to win reelection, including making a huge pile of bodies if needed. The two together are like pouring gas on a fire, and when you throw in a Mohamed bin Salman, adding some gunpowder to the mix.

Our hopes and prayers are with the Syrian people, but I fear that may not be enough. Evil often has to be dealt with using cold steel. The good news is we see solid moves by both the Syrian and Iraqi governments deploying military forces to jointly take control of their shared border.

If they can get the main border crossing active again, both countries will have gained some of their sovereignty back, and some national pride. The question then will be can that key road be made secure for commercial use… JD ] 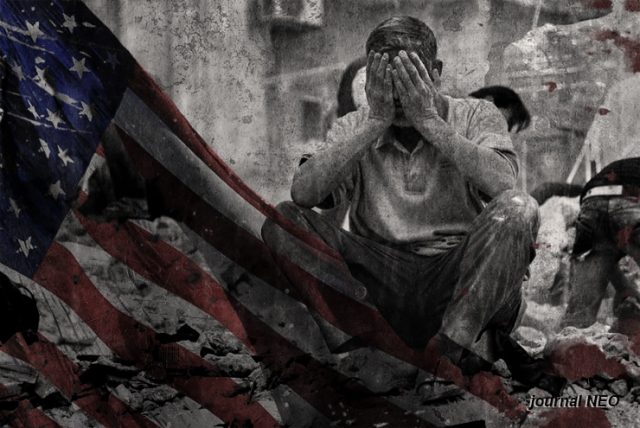 We all have heard enough Trump flip-flops on policy to not get too excited about anything reasonable that occasionally comes out of his mouth. Such things are usually an accident, and if not, his NeoCon handlers and Netanyahu will put him back onto the Unipolar path to great wealth and power for the chosen few.

High hopes were flying in 2018 when the Syrian coalition had finally defeated ISIS militants in the major areas they held while living off the captive populations, except for the Idlib jihadi dumping ground. Add to that the Syrian-Kurdish treachery of taking over traditional Arab lands at the behest of US support, which included grabbing the western oil region in Deir Ezzor.

Veterans Today followed all of this daily, including our three trips to Syria, beginning with my first as an election monitor in 2014 where I filed my first on-the-scene warzone report for NEO.

Five years later I can confess we are tired of the Syria story, not out of lack of caring, but via the grind of watching the suffering continue for so long without those responsible having to pay a suitable price. That will be my subject for today.

Trump’s full Syrian withdrawal announcement was a cruel tease, as the Pentagon was not even included in the decision. It was Trump winging it. The inference was that the troops would be coming home as a reward for a job well done, but the news came quickly that they would really be reassigned “nearby” to Iraq. The US footprint was remaining, and with the boot on Syria’s neck.

The NeoCon White House continues to disparage the Assad regime as cruel oppressors, despite Syrians overwhelmingly re-electing him in 2014, in a real election. I know because the international monitor team’s Arabic interpreter, a Canadian Palestinian, and I did the final translation of the election certification from Arabic.

I was at the morning meeting with the Syrian election commission people on June 1, and then drove to the Parliament to meet with the Speaker. Both briefed us, and were open to questions for 90 minutes each.

The Election commission was new, a response to Western attacks that Syrian elections were always rigged. The most notable thing I can share from that meeting was that to defend against US claims of ballot-box stuffing, arrangements with the opposition parties had been made to have their representatives in all 5000 polling stations with “eyes on” all the ballot boxes until the last one was counted. The election was a real deal.

Assad won by a huge majority, similar to the way that Roosevelt was elected to a third term. The Syrian people were not about to change leadership from those who had saved the country from the ISIS/militant slaughtering that had been orchestrated by the US coalition, which would have been followed by the carving up of Syria into a Balkanized group of states with respective special interest puppets in charge.

In my many street and polling station interviews that day, I learned that the Syrian people viewed Assad and the Army as one entity, where rejecting Assad would be like rejecting the Army which the Syria people were not about to do. Too much blood had been spilled. If you compare their KIAs to a corresponding percentage of the US population, the number would have been two million.

I shocked a press conference one day pointing that out, and then asked the question, what would the US population scream for if we had two million killed in a struggle to Balkanize and take over the country? I answered that it would have nuked whoever the offender was.

At the Parliament meeting, the Speaker told us that Syria viewed itself as being in a world war, as it was holding jihadi terrorist PoWs from 65 countries, which most of the world was not aware of at the time.

We later learned at VT that a large network had been constructed by the US coalition logistics people to keep a steady stream of jihadis flowing into Syria as cannon fodder for the nasty work to be done there, most all of it fully at the level of “crimes against humanity”. It is still going on.

After Trump’s spontaneous claim to pull the US troops out was reversed, we watched a new stain on America’s honor in the continued horrible treatment of the displaced internal Syrians in overcrowded refugee camps, where they were being held as virtual prisoners.

When many Syrian refugees were beginning to make plans to return to their homes and help rebuild their country, we could see that the US coalition had decided to disrupt that process.

Sure, some began to return, but we found the US wanted to try to make them unhappy with Assad by assuring the sanctions remained to block getting the country back on its feet by blocking the essentials needed to live, much less to rebuild.

The US excuse was to claim that the “political process” had to be well on its way before sanctions would be removed, but of course Washington knew it was in a position to block that process via its control over some of the participants.

And in one of the cruelest acts of all, the tens of thousands remaining in the huge al-Tanf US stronghold on the Jordan border were blocked from leaving the camp by US officials. There have been some busloads removed in the last two weeks, but people, including children continue to die there, due to the US virtually holding them prisoner.

A worse situation exists in northeast Syrian in the Kurdish SDF territory, where a large refugee camp is located near the town of al-Hawl in the eastern al-Hasakah countryside.

It was designed for 20,000, but now holds 74,000, including Iraqi refugees that fled fighting from Anbar province in Iraq last year. They are living under appalling conditions, exacerbated by the influx of ISIS family survivors of the ISIS jihadis that held out to the end in Deir Ezzor.

Instead of arranging for the care of these families in Deir Ezzor with proper logistics, they have been trucked all the way to northeast Syria, with many dying along the way from wounds suffering from the final month of fighting.

Maj. Gen. Kupchishin, Head of the Russian Reconciliation Center in Syria, said that Damascus is offering settlement schemes along with security guarantees to displaced Syrians. However, Kurdish forces and the US-led coalition are not cooperating. Imagine that.

Why do so few in the West know about these refugee horrors? It is because the US Coalition has had a complete blackout on all independent reporting on its activities inside Syria. When is the last time any of us have seen a Western news crew interview the victims of this cruel treatment?

All we generally see are short clips of people being loaded onto trucks, but no personal interviews on what they have been through and who do they blame for their suffering. The continued silence about these crimes only encourages their continuance.

Even the new Democrats in Congress have remained quiet about it, as punishing Syrians is an important topic to the Israelis along with the US, who are hoping the Syrian people will eventually blame Assad for it all. But the Syrians are not that stupid.

Can they form a Coalition in the Region?

The only silver lining is that finally Syria, Iraq and Iran are openly talking about forming a coalition to oppose the divide-and-conquer machinations of the US coalition, which has continued the chaotic conditions of the region and blamed it on Iran, an assertion which no one with half a brain believes.

Syria and Iraq have announced plans to open the Qa’im border crossing just south of al-Bakumal in Deir Ezzor province. The US wants to block that opening if possible, as commercial goods, including oil can be trucked into the eastern areas of Syria, while Damascus works on pushing the SDF Kurds out of Deir Ezzor. Assad needs the region’s oil production to help rebuild Syria.

I have written NEO articles several times over the last few years about the necessity of Syria, Iraq and Iran forming their own mini-NATO, with a consolidated defense from foreign interference, and have been greatly disappointed to see no progress.

Maybe 2019 could be the year to see full independence for Syria and Iraq from their long suffering at the hands of the international criminals that run some of the respective governments, who did their dirty work under cover of immunity from prosecution.

If the UN statutes concerning crimes against humanity are not to become a big joke, then the perpetrators of such during the Iraq and Syrian wars will have to be charged in a court, and not just the cannon fodder jihadis, but all those that supported them logistically. There is enough evidence. VT alone has tons of it and is ready to testify, and the sooner the better.