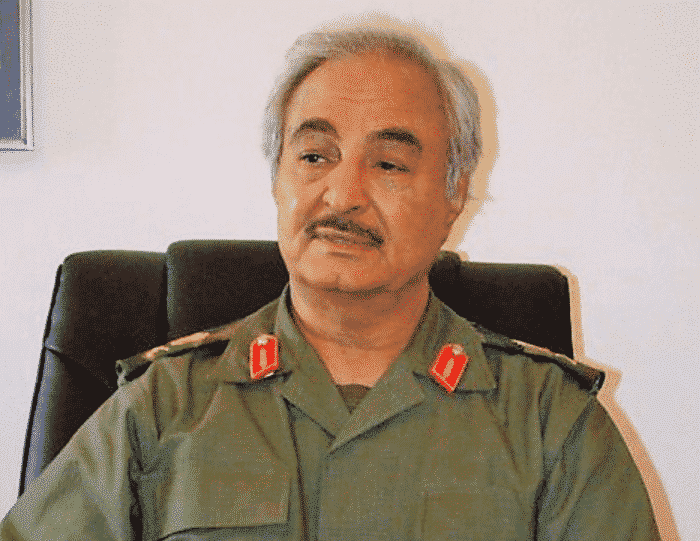 Ever since Field Marshal Khalifa Haftar began his historic march toward Tripoli to free all of Libya, he has been condemned and mislabeled as a rogue general, and even a dictator. This has been nothing, but a rhetorical spin campaign bent on maligning General Haftar, keeping the international communities at bay and from knowing the truth. General Haftar has been focused on removing the criminal armed militias who have continually preyed on Libyan citizens and bringing them to justice.

The biggest problem in Libya is the multitude of outside foreign interests that are all competing domestically in Libya to control all of its oil wealth, and the continued proxy war between several Arab nations. Let’s face it, the whole war that began in 2011, was all about disrupting Muammar Gadaffi’s plans to require oil purchasers to exchange their currency into the new proposed Libyan gold dinar to purchase all oil exports. This meant that currency devaluations in a trade for a currency with gold backing would entitle Libya to a greater value for their oil. Much of the European Union was opposed to this move.

Upon the fall and death of Libyan leader Muammar Gadaffi, the entire NATO enclave was not prepared for the aftermath and how to manage a country that was utterly destroyed in every way. The resuktant vacuum left by a not well thought out fake war instigated and fueled by President Obama, and a special focus by Hillary Clinton led to their participation in dropping weapons to the “peaceful demonstrators” who were actually al-Qaeda operatives. This was done in violation of law and against United Nations Resolution 1972.

The Kingdom of Saudi Arabia has risen to the call for help and provided much needed financial assistance as well as Egypt and other nearby nations. The only way that the region will become safe again will be to disarm and capture the various al-Qaeda operatives who continue to plunder, rape, steal and kill in Tripoli and around Libya. The United Nations and many organizations have condemned the human trafficking that has occurred inside Tripoli, yet they have been backing the wrong people and criminal elements in Tripoli. Mr. Fayez Al-Sarraj was installed as a defacto Prime Minister by the United Nations, has failed miserably and has taken absolutely no action to remove the various armed militias. In fact, where has the United Nations been in bringing peace and justice inside Tripoli? Installing an illegal government was a slap in the face at the first attempt at democratic elections which resulted in the House of Representatives (HOR) being established. The HOR reconstituted the Libyan National Army (LNA) and appointed Field Marshal Khalifa Haftar.

It is uncontroverted that the various armed militias who occupy Tripoli are in fact a criminal element with most as members of the various al-Qaeda factions. It is no surprise to the intelligence industry that all of the armed militia brigades occupying Tripoli now are actually al-Qaeda commanders! Many of them were operating inside Afghanistan and killing U.S. and NATO troops. Yet, now these same al-Qaeda commanders and their followers have been allowed to operate and exist within Tripoli for far too long. The United Nations has not taken responsibility for lack of action to protect the Libyan people, nor to free them.

Interestingly, the global media has refrained from gathering and identifying the armed militia leadership operating within Tripoli. They move about in Tripoli and report on the various heinous crimes but fail to investigate or report on the actual leadership responsible. The following is a list of the al-Qaeda commanders that are operating and controlling armed militia brigades inside Tripoli and who are responsible for so much killing, raping, thefts, and human trafficking:

Once Tripoli has been cleared of all of the armed militias, there is a good chance that many of these al-Qaeda leaders will flee Libya to neighboring nations to escape Libyan justice.  It is no surprise that President Donald Trump called General Haftar once he learned the truth of what was going on inside Tripoli and the clear objectives that General Haftar has laid out to remove these criminal armed militias. It is a clear departure from the innuendo and rhetoric from Trump’s own State Department because they truly do not understand Libyan politics. There is still a deep state within the State Department that is clearly working against President Trump and concealing what Hillary Clinton authorized in Libya that led to the deaths of American diplomats and security forces. Finally, a world leader understands and supports the right solution for Libya.

Foreign nations should awake soon and realize that the United States has now clearly seen the light and are backing and supporting General Haftar. The United States will continue to monitor General Haftar and the success of his army, but they will never be clear victors until they incorporate the 40 tribal chiefs and their brigades as well as the loyalists who still want to achieve the same objectives—to free Libya from armed militias, to hold elections, and move towards a peaceful nation once again.