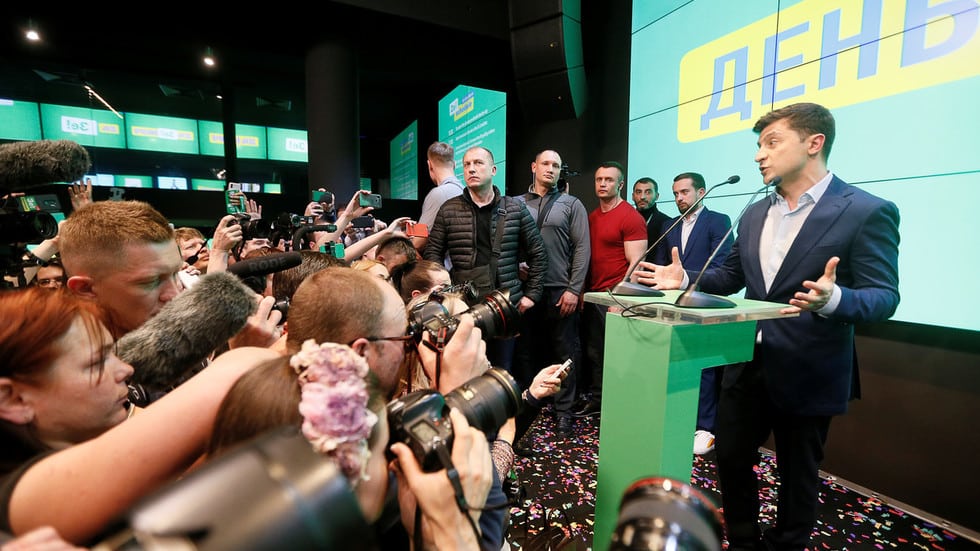 [ Editor’s Note: Zelensky is holding his cards close to his vest. For a man so far ahead in the polls he could have had a team ready, and even might, but is holding off on any announcements while he puts a wet finger in the air. 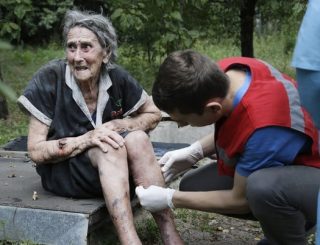 He might want to collect all the info that he can get about the support he needs now from the political powers in the Rada.

He needs to have his 73% majority sprinkle over into getting legislative control there so his angry opponents do not run a slash and burn campaign there blocking his new initiatives.

But if he does not need them to maintain control he can tell them to screw off, and run over them with his political steam roller, which could include prosecutions for the huge looting of Ukraine that has gone on for ages and be very popular.

Control over the military will be a trickier matter, as that is where a potential coup could come, with the usual foreign backing if Zelensky’s new programs piss off you no who. He threw out one big hint at the press conference, that he would restart the Minsk process which Poroshenko had wiped his feet on, with the full backing of France and Germany who were supposed to make Ukraine compliant but then took a “whatever” attitude.

The long suffering Ukrainian people deserve a respite from the revolving door of hoodlums that have traditionally run the country. One could say they voted the hoodlums in, but if those are the only people running for office that narrows your choices… Jim W. Dean ]

Comedian-turned-politician Volodymyr Zelensky, set for a landslide win in Ukraine’s presidential vote, stayed true to character at his first press conference, dropping some flashy promises but refusing to go into boring detail.
–

Shortly after claiming electoral victory, Zelensky held a Q&A session with reporters at his campaign HQ in a Kiev business center. While the official results of the elections have yet to be announced, multiple exit polls suggest he secured more than 72 percent of votes.

Zelensky addressed the media in an easy-going manner. He spoke in a mix of Ukrainian and Russian, switching between the two languages, sometimes in one sentence. He also talked English a bit. But if the press hoped to shed light on the policies of the incoming president and his team, the conference actually generated more questions than answers.

Bringing the civil war in eastern Ukraine to an end appears to be one of the top priorities for Zelensky. Promising to announce some kind of a plan shortly, he asked the reporters for help in the upcoming “infowar” that he says would help end the conflict, which, since 2014, has been raging between Kiev’s troops and the rebel self-proclaimed republics.

We will launch a very powerful information war to end the war in Donbass.

He then vowed to “act within the Normandy format,” referring to the French-German-Russian-Ukrainian talks on war in Donbass, saying that “we will continue the Minsk process, we will restart it.”

Next up, Zelensky did not rule out – even if half-jokingly – that the outvoted president Petro Poroshenko could gain a government post if the public “asks so.”

Do you want me to appoint him? Then I will ask society… If they tell me that they want to see Petro Poroshenko in one post or another – maybe, I don’t know.

Zelensky added, though, that he would like to try “new people” first. But the very team of the soon-to-be president still remains a mystery, as he’s refusing to provide any names, be it the new administration, the judiciary, or the country’s military.

“We have very serious acting generals who have authority in the army, you will definitely see them. I have no right to give the names of these people now, as there is an agreement with the generals,” Zelensky said cryptically, likewise not revealing his candidate for prosecutor general.

For now, Zelensky and his Servant of the People party – notably named after his own comedy show where he played a schoolteacher-turned-president – are promising to introduce the team “in the near future.”