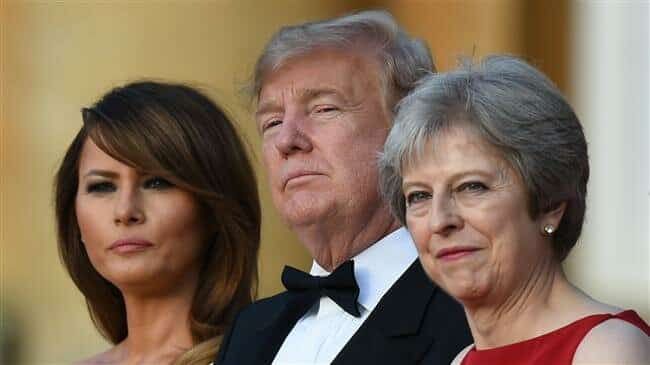 [ Editor’s Note: It was no surprise to see The Donald acting like he was on his old TV show, and virtually telling Mrs. May that she was “fired”. All US diplomats take intensive courses in local etiquette before being stationed in a foreign country to prevent embarrassing muffs.

Mr. Trump does not feel it necessary to be professionally prepared for anything, as that requires more work when he enjoys winging it to get out of briefings where his lack of knowledge is so embarrassing he avoids getting into that spotlight.

I am surprised he has been able to do his state of the union messages so well. My salute to whoever got him to listen to how best to do it.

So far Mrs. May has not responded. If she does it will be in a roundabout way. Say what you will about her, but her getting the EU extension to October was no small thing.

The EU negotiators know she has faced decisive opposition not only from Labor but within her own party, and purely for the internal politics of taking power themselves to have another Israel approved puppet, Boris Johnson, over another UN Security Council member. Imagine that.

If this keeps going the Nobel Prize people might establish a new category for the most hated head of state. And I am not kidding. I think it would be a great idea, but they never listen to me… Jim W. Dean ]

Breaking all normal diplomatic conventions, Donald Trump has blasted his host, British Prime Minister Theresa May, in an interview published shortly after May rolled out the red carpet at Blenheim Palace for the US president’s first official visit to Britain.

In the explosive interview with the British tabloid Sun published on Thursday night, Trump disparaged May’s compromise, pro-business plan to leave the European Union and warned that her approach could imperil any future trade deal between the US and UK, saying the prime minister’s Brexit plan is going “the opposite way.”

He said that May ignored his advice on Brexit negotiations with the EU. “I would have done it much differently. I actually told Theresa May how to do it, but she didn’t listen to me.”

At the Blenheim Palace dinner held in Trump’s honor on Thursday evening, May lavished praise on the US president and her country’s special relationship with America.

And, she vowed to “tear down” the bureaucratic barriers that the EU had put in the path of business, and promised to overcome American fears about her new Brexit plan.

“Now, as we prepare to leave the European Union, we have an unprecedented opportunity to do more. It’s an opportunity to reach a free trade agreement that creates jobs and growth here in the UK and right across the United States,” she told Trump.

“It’s also an opportunity to tear down the bureaucratic barriers that frustrate business leaders on both sides of the Atlantic. And it’s an opportunity to shape the future of the world through cooperation in advanced technology, such as artificial intelligence,” she added.

But Trump’s dismissive remarks threatened to undermine her desperate attempts to placate angry Tory leavers by winning US support for her so-called soft Brexit plan.

“He should be barred from all international meetings and should not be invited for state visits. Foreign leaders should also boycott going to Washington to be hosted by him,” added Etler who has a decades-long interest in international affairs.

“The world would be a much safer place if they did,” he stated.

During his interview, Trump also told the Sun that he wasn’t planning to spend much time in the British capital because he didn’t feel welcome because of all the mass protests scheduled against him for Friday.

“I guess when they put out blimps to make me feel unwelcome, no reason for me to go to London,” he said. “I used to love London as a city. I haven’t been there in a long time. But when they make you feel unwelcome, why would I stay there?”

In addition, Trump once again attacked London’s Muslim mayor, Sadiq Khan, accusing him of doing a “bad job” on tackling terrorism and crime.

Thousands of Britons have planned a “carnival of protests” during Trump’s visit to the country.

The planned nationwide demonstrations against Trump have been launched by a collection of different organizations protesting everything the populist leader stands for including sexism, racism and Islamophobia.

The protestors have found creative ways to express their disgust at Trump, such as a giant crowd-funded inflatable balloon of a “baby Trump” wearing a diaper which will float high over London within full view of the press, Trump’s entourage and eight million local Londoners.

London Mayor Khan, who has a tense relations with Donald Trump, and City Hall have given the green light for the giant inflatable “baby Trump” to be flown near Parliament.