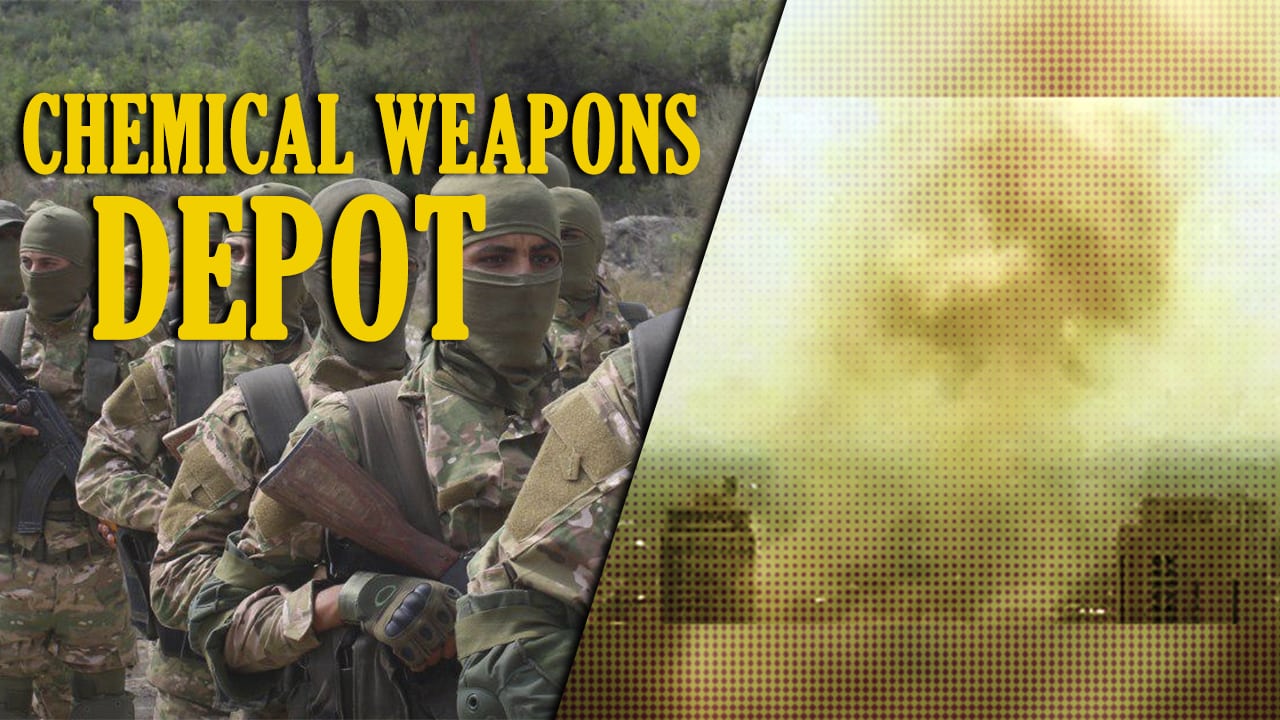 A supposed chemical weapons warehouse of Hay’at Tahrir al-Sham (formerly Jabhat al-Nursa) near city of al-Atarib in western Aleppo exploded on April 20. According to pro-government sources, the warehouse was one of the sites where militants were arming rockets and shells with toxic materials.

Members of the notorious propaganda organization “White Helmets” reportedly recovered the bodies of at least six people killed in the explosion. Three injured persons were evacuated to nearby hospitals.

The version of the events provided by pro-militant media outlets argues that the targeted facility was belonging to a local pharmaceutical company known as “al-Khalil” and stored “baby milk” only. Pro-opposition media added that the explosion was likely caused by an improvised explosive device. Nonetheless, it remains unclear who would need to blow up a baby milk storage facility.

Over the past few months, Russia and Syria have repeatedly warned that members of Hayat Tahrir al-Sham and the White Helmets, with assistance from Western intelligences, are making preparations for staging chemical attacks that would be blamed on the Assad government.

Hayat Tahrir al-Sham, Horas al-Din and several other radical groups have carried out a series of attacks on positions of the Syrian Arab Army (SAA) near the so-called Idlib de-escalation zone. The most successful attacks took place in al-Saraya, northern Lattakia, where 5 SAA troops were killed and in western Aleppo, where over 15 SAA soldiers died.

Additionally, pro-militant sources as well as several Kurdish outlets, linked with the US-backed Syrian Democratic Forces (SDF), came with a new round of speculations about supposed clashes between “Russian” and “Iranian” forces in the provinces of Aleppo and Deir Ezzor. The SAA denounced these claims as fake news.

These claims appear to be a part of a well-coordinated military psychological operation that’s aimed to undermine the Syrian-Iranian-Russian alliance. Similar reports repeatedly appeared over the past few years, but every time they were not supported by any evidence.

The situation remains tense in the desert area between the cities of Palmyra and Deir Ezzor. The ISIS news agency Amaq claimed on April 19 that ISIS members had ambushed an SAA convoy near the al-Bishri mount killing at least 20 soldiers and destroying 4 vehicles.

SDF-linked Kurdish insurgents continued their attacks on Turkish forces in the region of Afrin. On April 19, Kurdish fighters targeted alleged Turkish positions near Maryamayn and Villat al-Qadi with anti-tank guided missiles. Pro-Kurdish sources claim that 6 Turkish soldiers were killed. However, the Turkish military released no statements regarding its casualties. Therefore, most likely the attacked positions belonged to Turkish-backed militants.

Syria’s naval port of Tartus will be given for lease to Russia for 49 years, Russian Deputy Prime Minister Yuri Borisov told journalists on April 20 after meeting with Syria’s President Bashar Assad. Moscow will use the port for economic and logistical purposes.

Russia already has a naval facility in Tartus, which was set up at the second largest port. This military facility is currently undergoing modernization.