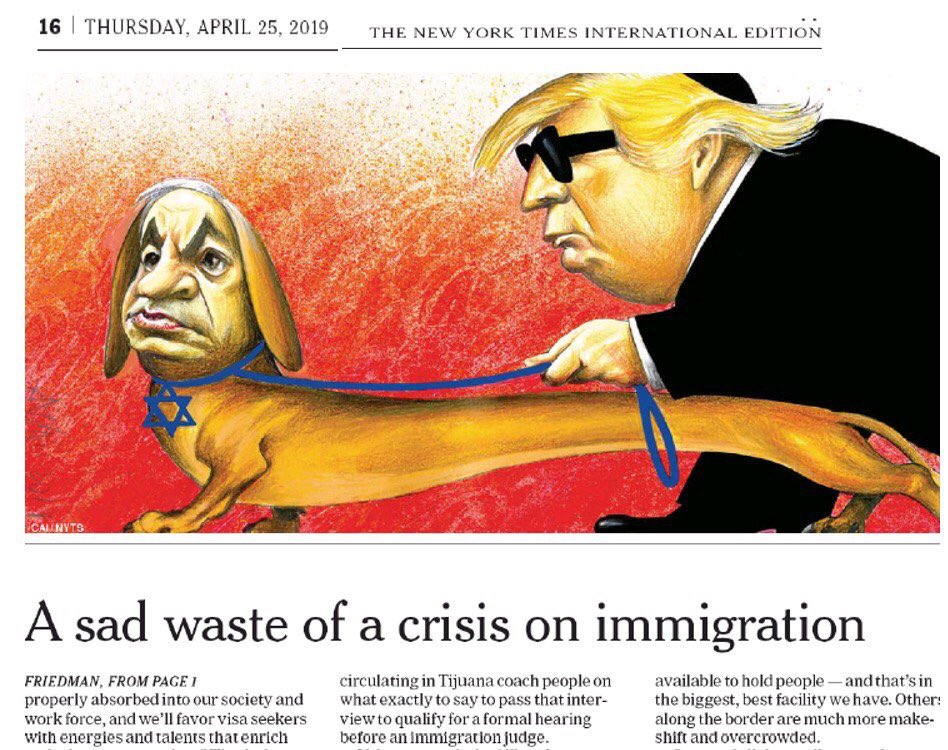 The New York Times later apologized for their missteps. Still, Jewish organizations such as the American Jewish Committee were outraged. The organization declared:

“Apology not accepted. How many @nytimes editors looked at a cartoon that would not have looked out of place on a white supremacist website and thought it met the paper’s editorial standards? What does this say about your processes or your decision makers? How are you fixing it? Naked antisemitism such as in this image is not ‘an error of judgment.’ We have to wonder if the @nytimes editors would’ve published a similar cartoon depicting any other country or people.”

Donald Trump Jr. took to Twitter and said of the cartoon: “Disgusting. I have no words for flagrant anti-Semitism on display here. Imagine this was in something other than a leftist newspaper?”

One may disagree with the depiction, but let us ask a central question: Isn’t Benjamin Netanyahu guiding Trump with respect to foreign policy in the Middle East? Hasn’t the mad man been able to get virtually anything he wants?

Keep in mind that Iranian officials have always crafted their argument on the Non-Proliferation Treaty, a treaty that has been acknowledged by all Western powers.[2] The Treaty acknowledges “the inalienable right of all the Parties to the Treaty to develop research, production and use of nuclear energy for peaceful purposes without discrimination.”[3]

Iran also made it clear that its nuclear program will not exceed the 20 percent benchmark,[4] which is right in line with the Treaty itself. Yet the Zionist regime both in Israel and America continued to claim that Iran was being unreasonable.[5]

This is no surprise at all, for Iran has tried this in 2004 and in 2005, demonstrating that it was ready to compromise its nuclear program and even convert all its nuclear energy to fuel rods if the U.S. would support it.

Under such a program, the IAEA would be free to check any undeclared facilities. Some officials in England were even willing to admit that Iran was reaching out to the West. Peter Jenkins, British representative to the IAEA and member of the British delegation to Paris, declared, “All of us were impressed by the proposal.”

But the U.S., under Bush, dismissed the offer and wanted Iran to shut down all its nuclear programs. England followed suit. “The British objective was to eliminate entirely Iran’s enrichment capability,” Jenkins continued. “I remember we couldn’t even allow Iran to have 20 centrifuges for R&D (research and development) purposes, because we ourselves had mastered the technology with even fewer than that.”[6]

Trump again shut down any peaceful resolution between Iran and much of the West by rejecting a reasonable proposal. Who was behind him? Benjamin Netanyahu. So, going back to the NY Times article: is it true that Netanyahu is leading Trump to a dark path in the Middle East?

You be the judge.