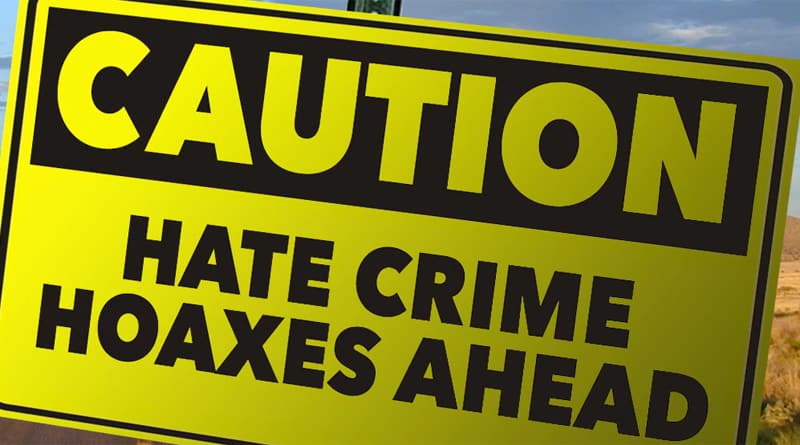 [ Editor’s Note: A brother got caught doing this one, obviously not aware that a major tagging night downtown with all its surveillance cameras was not a smart thing to do.

I would bet he did not do too well in school. This was not a kid, but a big strapping 24 year old. The B’nai Brith did their usual thing, getting all the hate crime publicity coverage it could out of it anyway.

This is routinely done despite Jews being among the most crime free victims in the country compared to other groups. Mass media covers this little factoid up like a rug.

In the former heyday of “hate crimes”, the real experts estimated about 25% were fake. Jewish cases were handled with kid gloves. I remember one where a holocaust event ticket sales at one synagogue got a Jewish teen angry.

He bought some spray paint locally and tagged his on synagogue. The cops check out spraypaint sales at the local hardware store (remember those?) and that led them to  the kid’s garage.

How did the media spin that one, with the local B’nai Brith? The double down by featuring the kid, a teen, as a victim, advising the community that the family “needed some space” to deal with this “troubled” young man.

Later, during my days in Atlanta, a freshman black girl at prestigious Emory University was on her way to flunking out and decided she needed some cover to create some “trauma” for her exit. Some nasty things written on her dorm room door did that trick and made Atlanta news.

But the cops were suspicious as liberal Emory had never had such an event, so they put a hidden camera in the wall across from her door, and yes, caught her tagging here own door again. And yes, the media spun that as a young girl “needing some space”.

That was part of my early education that not all victims are created equal. Some are at the head of the pack and are determined to stay there… Jim W. Dean ]

An anti-Semitic attack on a kosher cafe in Canada that police described as one of the “worst” they had seen has been revealed as a ruse by the owners. A vigil and a fundraising campaign had been set up to support the family.
–

The fake attack saw the BerMax Caffe and Bistro in Winnipeg spray painted with anti-Semitic graffiti and “severely vandalized.” A woman was assaulted and taken to the hospital for treatment, CBC reported at the time.

Police charged the owners with public mischief after an investigation involving 25 police officers and 1,000 hours of work revealed it to be nothing more than a scam. “In the end, we found evidence of a crime. It just wasn’t a hate crime,” Police Chief Danny Smyth said, Global News reports.

Alexander Berent, Oxana Berent, and Maxim Berent are to appear in court next month. Oxana was the woman allegedly assaulted. She denied the attack was fake on CBC Radio, saying, “We don’t joke about swastikas on our walls.”

The attack was alleged to have taken place on April 18, and it was the fourth reported attack on the cafe in five months. Police are also investigating these incidents, but haven’t commented on them yet.

“If the allegations of Winnipeg police are true, we condemn this fabrication of a hate crime in the strongest possible terms,” Jewish organization B’nai Brith Canada said in a statement.

“Making false allegations of antisemitism does nothing to quell the rise of racism and discrimination in Winnipeg and across Canada and will embolden the conspiracy theorists and purveyors of anti-Jewish hatred who blame the entirety of society’s ills on the Jewish community.”

A crowdfunding page campaign had been set up to support the family and it was closed after news emerged about the fake attack. A vigil organized for Thursday night was also canceled.